“For both the headline and core figures, the monthly and annual numbers were stable or down from last month. Based on that data, inflation is certainly not on an unstoppable increase.”

“The inflation story is more about isolated components, rather than general increases in prices, and even those components are showing signs of peaking. As we dig into the numbers, inflation is above where it has been but is showing signs of rolling over and returning to more comfortable levels.”

What certainly did not “pause,” however, was the less-watched July Producer Price Index (PPI). The PPI soared to a record high (+7.3% year-over-year) in June. Economists expected that number to drop to 7.2% year-over-year in July.

The index for final demand services (which includes transportation) rose 1.1% in July, marking the largest monthly increase since the index was created in December 2009.

This has contributed to a major disparity between the PPI and CPI. Historically, CPI has slightly lagged PPI as it takes some time for rising producer costs to get passed on to consumers. More recently, though, the two indexes have completely detached. 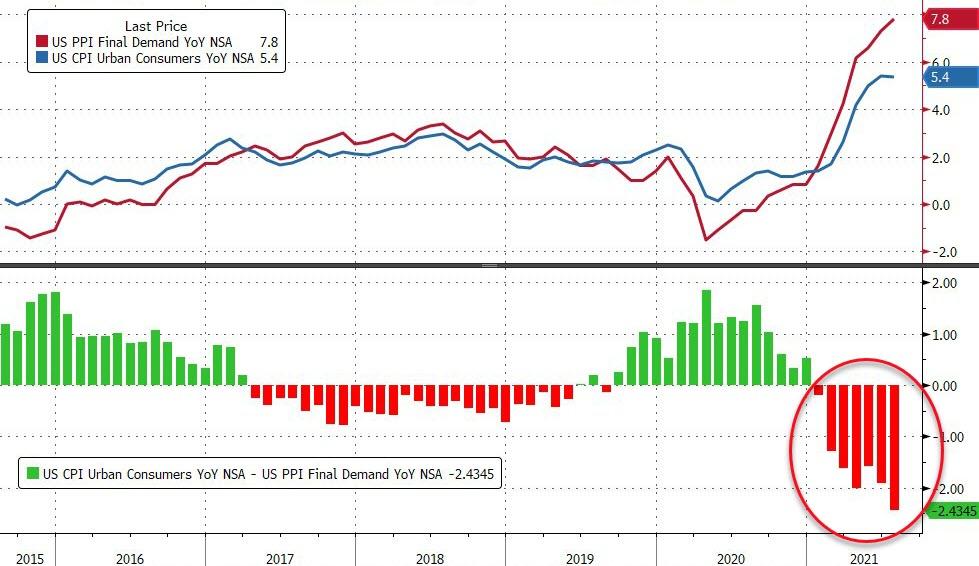 What’s more, a larger gap between headline CPI and PPI has never been observed. This should eventually appear in CPI, potentially in a dramatic CPI “miss” that blows past the consensus estimate.

The question now is whether this will push the Fed’s taper timeline any further forward.

“Today’s tight economy […] certainly does not call for a tight monetary policy, but it does signal that the time has come to dial back the settings,” said Kansas City Fed President Esther George yesterday, prior to this morning’s July PPI release.

Dallas Fed President Robert Kaplan also said yesterday afternoon that he wanted the Fed to issue a taper warning in September and to begin scaling back bond purchases in October.

It should be noted that neither Kaplan nor George serves on the 2021 FOMC’s Board of Governors. And neither is serving a one-year term on a rotating basis. George is only an alternate member and Kaplan is due to rotate into the committee as an alternate in 2022. Alternates rarely get to vote.

This means Gorge and Kaplan don’t effectively have voting rights on the FOMC. For that reason, what they say should be taken with a grain of salt. George and Kaplan can/will contribute to the deliberations on monetary policy, but their inability to vote allows them to make such statements on tapering.

If Fed Chairman Jerome Powell said the same things George and Kaplan did yesterday, stocks would get crunched in a near-instant.

But he hasn’t uttered a peep. And he won’t for a long while. Not until September 22nd, at least, when the FOMC wraps up its monthly meeting and Powell is expected to issue that dastardly taper warning Wall Street has talked so much about.

So, despite today’s troubling July PPI print, stocks are unlikely to get hit with any short-term pessimism as a result of it – something that should only embolden bulls further if stocks can stave off a bout of delta variant-driven selling.