The Dow and S&P are both trading slightly lower this morning as investors monitor an uptick in coronavirus infections. The Nasdaq Composite, meanwhile, is rising for a small gain.

Data from Johns Hopkins University shows that daily U.S. Covid-19 cases are up an average of 69,967 (per day) over the last week – a record high. Hospitalizations are up 5% as well.

Fatality rates, on the other hand, have fallen significantly. 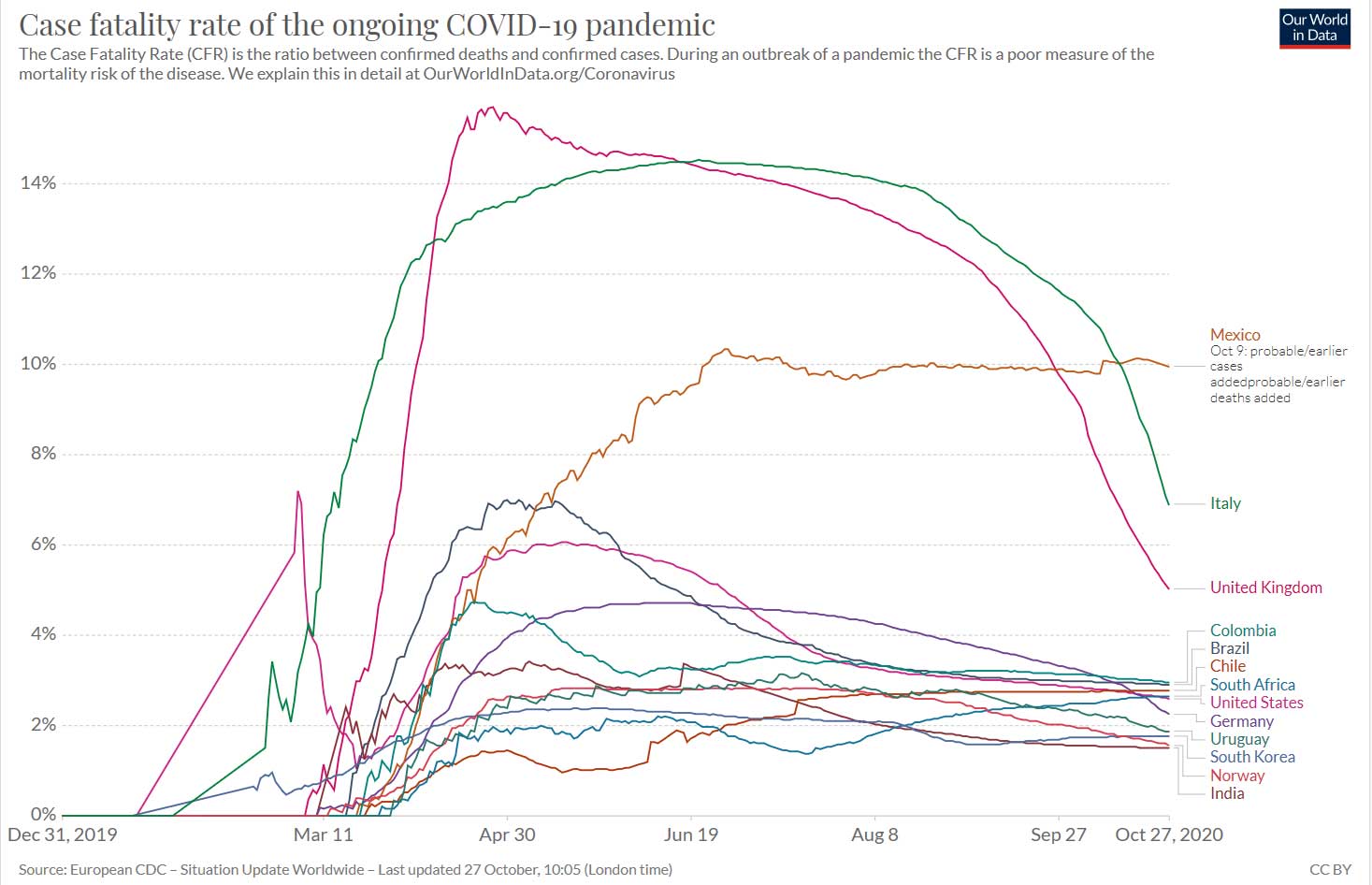 Nearly every country is seeing a sharp decline in deaths relative to the number of confirmed infections. Increased testing, treatment ability, and tracking have contributed to this trend. The most recent data from the World Health Organization (WHO) says that 1.2 million people have now died with (but not necessarily from) Covid-19.

In 2019, 1.4 million people died while infected with tuberculosis (TB) – a well-known bacterial lung infection that’s most dangerous to men and women over the age of 65. At its current clip, Covid-19 is on track to slightly surpass the TB death toll, but not by much.

It’s not a great apples-to-apples comparison, as TB has a far smaller measured fatality rate than the coronavirus. Roughly one-third of the total population on planet earth is infected with TB every year. On average, 9 million become ill, and 1.5 million die. In that regard, 2019 went better than expected.

But it’s still a disease that society doesn’t completely cripple itself over. Alcohol abuse both directly and indirectly causes 3 million deaths per year, too.

Yet, alcohol remains legal in almost all countries, save for mostly Muslim nations like Libya, Kuwait, and Saudi Arabia. Over time, the governments of the world could bring alcohol-related deaths down to zero by instituting a complete alcohol ban.

That’s not realistic, though. Nor would the majority of people even support such a cause. The economic damage done to the beverage industry alone would provide significant hurdles to passing legislation.

Just like business-killing, government-imposed “second wave” lockdowns for a virus that medical experts now have a far better understanding of.

Simply put, over the next few months, Covid-19 isn’t going to impact the market as much as it did earlier in the year. Nor is a stimulus package, which is virtually guaranteed to arrive at some point following the presidential election.

Instead, the election itself – and a contested/peaceful transfer of power – should prove to be a far greater influence.

“The biggest risk appears to be the threat of a contested election and the country not knowing the winner of the Presidential election next Tuesday night,” explained Brian Price, head of investment management for Commonwealth Financial Network

“I think that investors are taking some chips off the table or increasing their hedging positions in advance of what could be a tenuous period for risk assets.”

In this case, Price is right; there’s no telling what will happen when the votes are finally tallied. Investors should treat the election like corporate earnings. Unless they’ve got inside information (which is illegal with earnings-based trading, mind you), standing aside is usually the best move.

Anything else would practically be gambling. And if 2016 is any indicator, Biden’s chances of winning are certainly not a “sure thing.”

Which, at present, makes the idea of holding equities through November 3rd a particularly frightening prospect.

Why Quantiative Tightening Is Coming No Matter What the Fed Decides