Stocks rallied again this morning, notching new all-time highs in the process. There’s seemingly no end to the bull run as the market continues to log positive trading sessions.

Odds are that the broader indexes will close for even bigger gains this afternoon.

Fundstrat’s Tom Lee, who famously predicted a $20,000 Bitcoin back in 2017, believes the market’s uptrend will persist as Covid Delta infections dwindle.

“We realize equity markets have been choppy and the wide variance of perspective means investors do not have an easy consensus. But our central case remains that we are shifting further into full risk-on, with an ‘everything rallies’ into year-end,” wrote Lee in a Tuesday note to clients.

“The cadence of incoming data has improved in the past few days, the most notable being the apexing of Covid-19 cases in a number of states.”

Lee is known for being one of Wall Street’s biggest bulls, but that doesn’t mean he’s jumping the gun on Delta’s decline. The University of Washington’s Institute for Health Metrics and Evaluation (IHME) came to a similar conclusion with its latest predictive model. 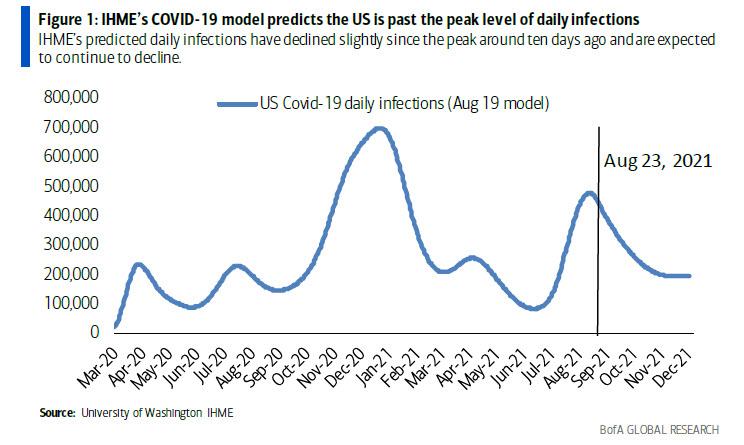 “The US is now past the peak level of daily Covid-19 infections caused primarily by the Delta variant,” said Bank of America’s Hans Mikkelsen, citing the IHME model.

If that’s true, then economic activity is likely to tick higher in the US once more. That would normally be viewed as a bullish turn of events.

With Fed Chairman Jerome Powell set to speak on Friday, however, a peaking Delta outbreak may give Powell reason to accelerate his taper timeline – something that’s likely to crunch stocks via the discounting of share prices.

But discounting is just one of three ways that tapering will impact equities. Tapering causes real rates to move higher, too, intensifying the amount that share prices are discounted.

And perhaps the most underreported effect of tapering has to do with interest rate volatility that arises when the Fed reduces its mortgage purchases. When the Fed buys mortgages, it suppresses mortgage prepayment risk. The Fed doesn’t hedge against prepayment risk because of this.

The private sector, on the other hand, certainly needs to. The hedging of prepayment risk causes interest rate volatility to jump, forcing equity volatility higher as well.

The result is a massive risk-off shock (aka selling) as investors rush to limit their exposure to equities. That doesn’t include the implicit quantitative tightening (QT) that will arise from the lifting of the US debt ceiling in October or November, which should only cause bulls to clamp down more.

Ironside Macroeconomics Managing Partner Barry Knapp believes tapering will knock the S&P down by anywhere from 10%-12% when it eventually hits, which is an interesting prediction given where that would take the market. 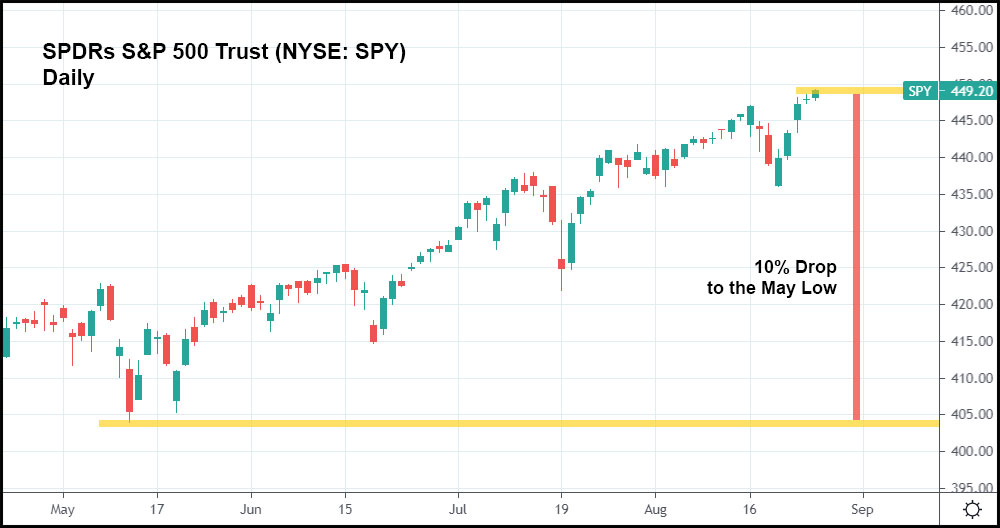 A 10% drop would send the S&P right down to the May Low at around 4,050.00. It’s a level of key support that could very well serve as a recovery “launchpad” in the weeks that follow. On the other hand, the market could also plunge even lower.

The last time stocks endured QT was back in late 2018. Powell initiated QT in September of that year and the S&P sunk 20% over the next three months.

These days, the market has only grown more dependent on quantitative easing (QE). Tapering QE could have a far worse effect as a result when Powell decides it’s time to eventually scale back purchases.