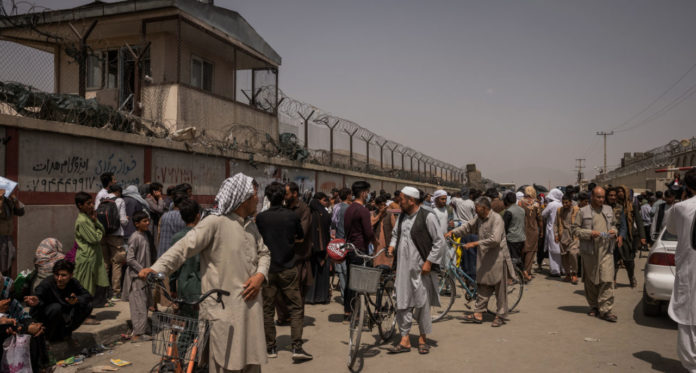 But then suicide bombers attacked Kabul airport around 10:20 am EST, causing stocks to fall in a near-instant. US officials reported multiple US and civilian casualties as a result of two separate explosions. One occurred at the Kabul airport gate, and another came from a car bomb. 3 US Marines were injured while 12 civilians were confirmed dead, some of which were children. More accurate casualty information is forthcoming as first responders scramble to save victims.

“Every day we’re on the ground is another day we know that ISIS-K is seeking to target the airport and attack both U.S. and allied forces and innocent civilians,” warned President Biden yesterday.

And though the bombings had little to do with equities, the uncertainty they caused was enough to provoke some knee-jerk selling. The CBOE Volatility Index (NYSE: VIX) spiked alongside gold prices. Bitcoin, on the other hand, slid with US stocks.

The dip likely confirms what investors already know by now:

This is a market that’s unable to handle bad news.

For much of the current year, negative headlines have contributed to sudden, short-lived corrections. Stocks always came charging back in the days that followed, but in general, it’s been a gut-wrenching affair.

Today’s attack was certainly abhorrent. There’s no doubt about it.

But should it really impact share prices? And will it prevent another recovery rally?

The answer to both questions is a resounding “no.”

Biden says the US will be out of Afghanistan completely by August 31st – a date imposed upon US forces by the Taliban. Critics have argued that it’s a nearly impossible timeline to follow. Instead, some experts believe a full withdrawal could happen by mid-September.

Regardless of what happens, will either outcome hurt or help stocks? There may be some intraday selling or buying like we witnessed this morning.

Overall, though, the situation in Afghanistan is unlikely to have a profound impact on stocks. What we’re seeing today stems from how tightly wound the market currently is as Powell’s speech on the economy approaches.

“Expect investors to keep an eye on the Fed’s symposium the rest of this week for any comments about tapering or timing for interest rate hikes,” said Leuthold Group strategist Jim Paulsen.

“Either unexpected commentary from the Fed or a failure or success in scaling 4,500 could bring additional volatility to the stock and bond markets.”

“I think we want to get going on the taper. Get the taper finished by the end of the first quarter next year,” Bullard said.

“And then we can evaluate what the situation is and we’ll be able to see at that point whether inflation has moderated and if that’s the case we’ll be in great shape. If it hasn’t moderated, we’re going to have to be more aggressive to contain inflation.”

If the tapering’s going to end by Q1 2022, it may have to start sooner than many economists predicted. Bullard has pushed for aggressive tapering over the last few months. He also doesn’t have Fed voting rights, which makes his opinion significantly less potent.

Voting Fed members maintain a far more dovish stance by comparison. When Powell speaks tomorrow, he’s expected to take a “best of both worlds” approach, acknowledging economic progress while still explaining that the US has further to go before making a full recovery.

That could ultimately help stocks and even launch them to new highs. Alternatively, a hawkish tone could lead to additional selling.

No matter what happens, though, it’s become abundantly clear that the taper is coming. It’s just a matter of when, and more importantly, how far stocks will fall when the reduction in bond-buying hits.