After a big Monday gain, the market’s looking to close out the week on a positive note. The S&P touched another record high this morning as the major indexes slowly added to their winnings.

“We do not expect wild things in today’s trading session as everyone is waiting for the first-quarter earnings season to start next week.”

The March jobs report, released on Good Friday, launched stocks toward their current trajectory. Far better-than-expected payroll data was celebrated by analysts and economists alike. Many Wall Street firms applauded the news, too, but some experts were skeptical about how the massive jobs add would impact inflation.

“This reflects the lifting of restrictions, the ramp-up in vaccinations, and boost provided by the fiscal stimulus,” said Anu Gaggar, senior global investment analyst at Commonwealth Financial Network.

“Faster jobs and wage growth can have an upward pressure on prices and test the Fed’s patience with easy monetary policy.”

Minutes from the Federal Open Market Committee’s (FOMC), which pre-dated the March jobs report, were released this week, revealing that the Fed doesn’t seem intent on touching rates or its bond-buying programs any time soon.

Federal Reserve Bank of Dallas President Robert Kaplan, however, broke rank, saying that he “[worries] about excesses and imbalances,” and that “failing to communicate Fed exit could stoke risk-taking.”

Kaplan finished, suggesting the Fed “should withdraw some accommodation once the pandemic is over.”

His remarks initially sent shockwaves through the market on Wednesday, but stocks ultimately absorbed the damage before moving higher.

And though inflation has been largely ignored in favor of the US labor recovery, it may start rearing its ugly head soon enough. Futures were spooked this morning by surprisingly high Chinese inflation readings. China’s producer price index (PPI) inflation hit a high it hasn’t seen since 2018. 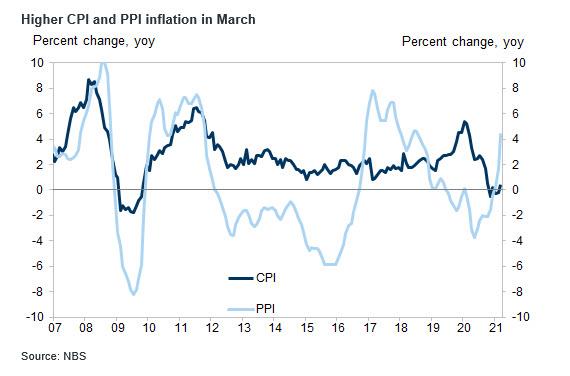 And if that wasn’t bad enough, the Bureau of Labor Statistics (BLS) released its delayed US PPI measurement, which also notched a stunning surge. 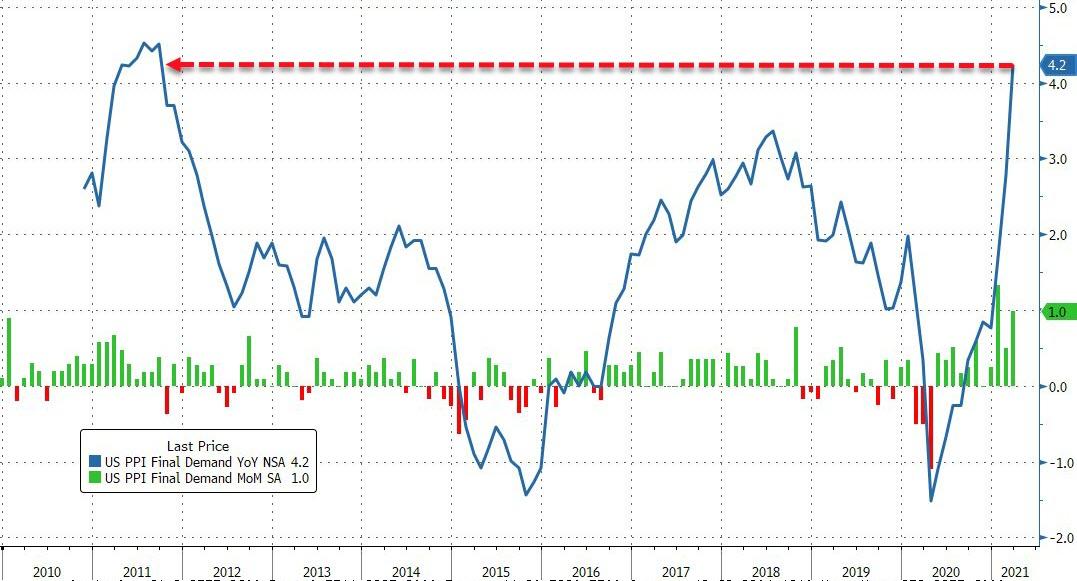 Unlike China’s chart, though, this one shows a near 7-year high and 11 straight months of PPI increases.

HYCM chief currency analyst Giles Coghlan said that “as long as monetary stimulus is easy, as long as fiscal policy is easy, any hiccups in stocks are probably only going to find buyers.” It’s a sentiment shared by most investors and strategists.

But the data coming out now suggests that inflation is running away far quicker than expected. The BLS is having a hard time keeping pace with its reporting, and what’s more, much of the data its relying on is estimated.

The foundation of an inflationary scare is quickly forming as a result. Before long, the Fed will be forced to act. Don’t be surprised to see an even more ghastly set of numbers in April, or even worse, a March revision that shows a larger PPI surge after the BLS gathers more accurate information.

The mainstream financial media is largely ignoring inflation. So too is Wall Street. The Fed, however, will not. And when Jerome Powell eventually pulls the plug, there could be hell to pay.

Especially for the market’s overachieving sectors, like tech, that got fat on artificially “squashed” rates.