‘Twas the day before Christmas, and all through the market. Not a trader was trading, not even Warren Buffett. Share values were held up by QE with care, in the hopes that (in 2022) rate hikes wouldn’t be there.

And though equity markets were closed, crypto trading was not. Bulls wanted more Bitcoin gains, and this year, Crypto was red hot.

But over the last few weeks, Bitcoin has fallen. Dogecoin saw some losses, too, despite Musk going “all-in.” Now, though, a major reversal seems to be underway. And come New Year’s, it might be bears – not bulls – who rue the day. 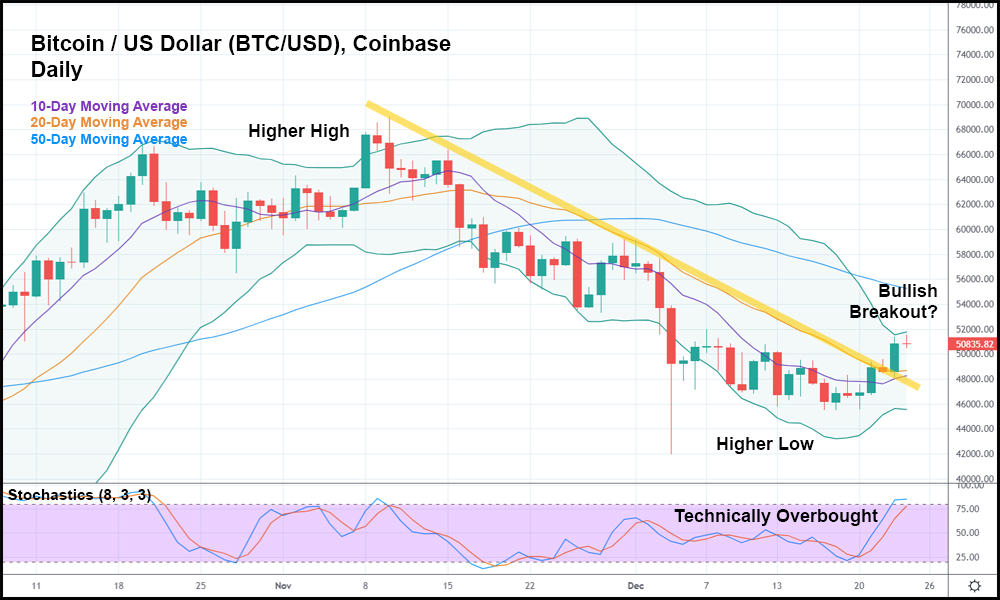 All poetry aside, it’s no secret that Bitcoin has finally managed to level off after tumbling since early November, back when Bitcoin hit a new all-time high. It was certainly exciting to see a new high at the time, but as is always the case, that’s not when traders should be excited – it’s when a sell-off occurs and Bitcoin starts to turn higher once more.

And that’s exactly what’s starting to happen as the Santa rally shifts from equities to crypto. Most major altcoins – cryptocurrencies that aren’t Bitcoin – are up over the last few days also. For Bitcoin, though, this is a more significant move now that crypto’s top coin has closed above its bearish trend (yellow trendline) and the 10-day moving average.

What’s more, Bitcoin set a higher low relative to the lows of late September as well as a higher high at the all-time high.

This may look like a clear situation for traders to buy immediately, but one potential bearish “stop sign” remains. The stochastic indicator suggests that Bitcoin is currently overbought in terms of daily candlesticks. That’s not to say Bitcoin won’t rise further despite its overbought status, just that a vertical ramp higher might be more challenging.

Keep in mind, though, that in the past, Bitcoin has blown right through overbought conditions to uncork some truly stunning rallies. It also has quickly retraced lower on occasion. That’s why it’s important to make sure you don’t get long on Bitcoin on a “head fake” bullish breakout. Waiting on another move higher following the initial breakout can often confirm that a trend reversal signal is a higher probability one.

It also can help identify longer-term trends (especially when applied to weekly or monthly candlesticks) without having to dig into abstract fundamental analysis – something that many Wall Street strategists prefer, as it gives them more “wiggle room” to work with when they’re wrong.

And though some investors might feel like it’s too late to get in on crypto, the truth is that there’s still plenty of time for “no-coiners” – folks who either don’t want to buy Bitcoin or believe they’ve missed the boat – to participate.

More than half of the US Bitcoin holders right now actually bought their first Bitcoin in 2021. You can be sure that another wave of buyers is coming next year as Bitcoin’s total available trading supply likely drops to new historic lows, potentially pumping up Bitcoin’s price in the process.

There are no guarantees that this will happen, of course. And no one has a “crystal ball.”

But make no mistake about it, the crypto train hasn’t left the station for no-coiners just yet. Nor anyone who may have exited the market due to its recent volatility.

There will always be opportunities for investors to actively trade the crypto markets, and with cryptocurrencies that have even outperformed Bitcoin – one of the best-performing assets of all time – in recent years.

So, for anyone who feels “left out” by missing 2021’s crypto rally, the good news is that Bitcoin just sold off from its record highs and may be turning a corner, allowing even the staunchest no-coiner another chance to get in on the action before it truly is too late.