Stocks gained this morning as the Santa Rally continued. After opening flat on the day, the major indexes all climbed higher through noon despite lower-than-normal volume due to the shortened week of holiday trading.

Still, Omicron fears remain a clear and present danger to bulls. The UK just confirmed 100,000 new Covid cases over the last 24 hours, hitting a new pandemic high despite the country’s advanced vaccination rate. New social gathering guidelines have been passed down to Brits as a result, canceling many Christmastime events.

Thankfully, Omicron hospitalizations appear to be down relative to Delta according to recent hospital data. The University of Edinburgh published a study this morning suggesting that’s the case, too. Researchers from the University claim that the risk of being hospitalized by an Omicron variant infection is only two-thirds as likely as being hospitalized with Delta.

“The economy was able to sustain better than most expected” in response to Delta, said Globalt Investments portfolio manager Keith Buchanan.

“A lot of people will say that the economy held up because there was more monetary stimulus. Coming into Omicron, that’s not necessarily the case as much as it was in Delta and this is another test of a different flavor. It’s testing if the economy and the market can hold up given the much less accommodative fiscal and monetary policy.” 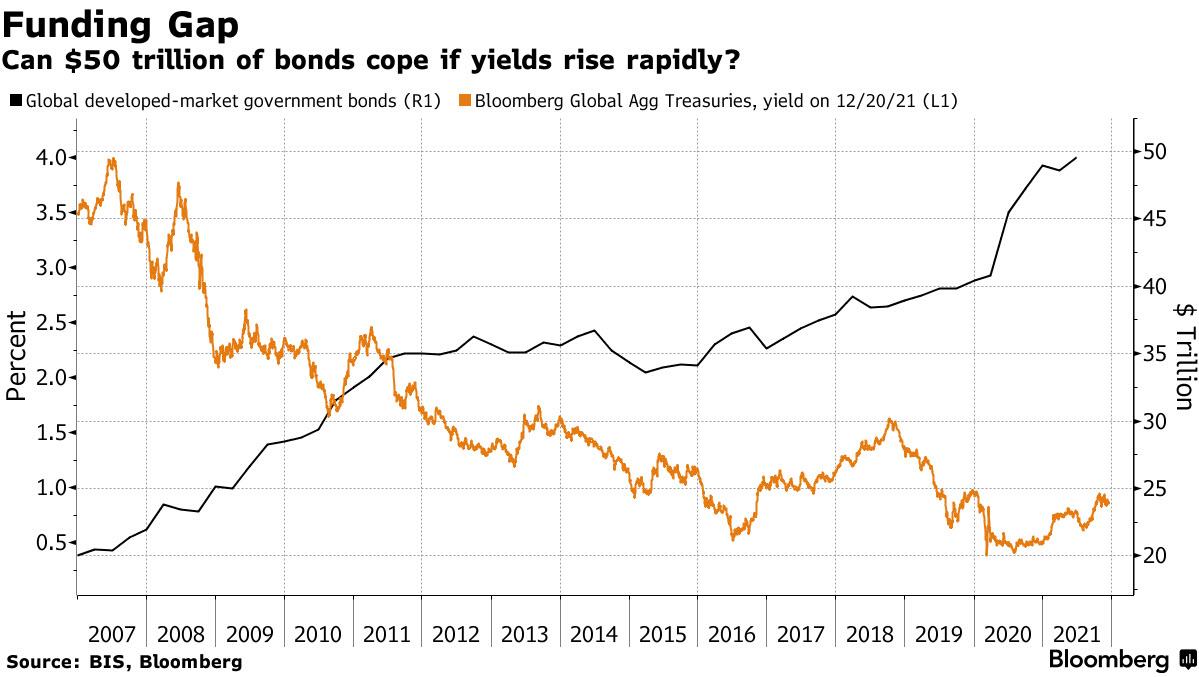 And while it’s true that net government bond holdings have been trending upwards long-term, the recent increase is unprecedented.

This helped squash rates while allowing growth stocks to flourish on a glut of cheap debt. But now, it’s a massive hazard looming over bulls. The Fed’s accelerated, pandemic-driven QE program contributed greatly to the surge in government bond holdings.

What happens, though, when QE is eventually tapered away to nothing and the Fed stops buying bonds? Will the remaining buyers – banks, pension funds, insurers – pick up the slack? No, they won’t. Nor should they be expected to. The Fed went into overdrive after Covid hit. Even collectively, other bond investors couldn’t hope to match the Fed’s purchasing power.

And yields are expected to rise next year as the Fed targets three federal funds rate hikes for 2022. If yields spike, they could cause liquidity issues within the bond market, leading to severe bond price volatility in an already relatively illiquid market.

For reference, central banks likely control roughly half of the world’s major government bond markets. Deutsche Bank analysts recently said that only 10% of Germany’s government bonds are freely floating. The number of bonds available for trading is small, which could cause intense yield uncertainty in the event of a sudden rise in rates as bondholders look to sell.

That’s something that seems highly bearish, and in the short-term, it probably would result in heavy equity selling. But it’s also the trigger the Fed would need to step in and start QE up once more despite persistently high inflation. That would likely spur stocks higher long-term again (nominally at least) as inflation rises in lockstep.

All while the veritable “mountain” of government bonds grows ever larger, only making the problem worse with time.