After a positive month of May, investors continue to “feel the love” in June.

Despite the fact that American cities are burning, U.S.-China tensions are rising, and COVID-19 has ransacked the economy.

It doesn’t seem to matter to bulls, though. Instead of getting upset, they just want to buy, buy, buy.

Because now, at long last, the U.S. is starting to reopen.

That means a return to everyday life and the way things were pre-coronavirus, right?

Well, not exactly. There will certainly be a “new normal” for quite some time, and the economic recovery that investors are betting on might take longer than expected.

And even if the reopenings (and recovery) go well, some analysts are concerned that the market could still drop short-term.

“Equity markets continue to display remarkable resilience in the face of a constant barrage of troubling developments, with investors continuing to focus on the positive signs of reopening,” Mark Hackett, chief of investment research at Nationwide, said.

He continued, adding that stocks are at their highest valuations in nearly twenty years. To Hackett, it could be proof that “markets are due for a breather following an unprecedented rally.”

Art Hogan, chief market strategist at National Securities, was quick to point out that the bad news just keeps on coming. Over the last weekend, riots ran roughshod through major U.S. metropolitan areas in response to the murder of George Floyd by Minneapolis police officers.

“Nothing that has happened since the market closed on Friday has been market positive. When you think about clearly we’re beginning to take U.S.-China tensions seriously and you add on to that the massive amount of disruption going on in almost every major city in the country right now, none of that could be seen as market positive,” Hogan said.

“At the levels we’re at, I wouldn’t be surprised to see the market take a pause and pull back.”

No matter how you slice it, the current rally appears overextended. But still, it persists, even with so much negative energy coursing through America.

Thankfully, one asset – one that’s moving in a more sensical manner – is rising, too, during all this strife. 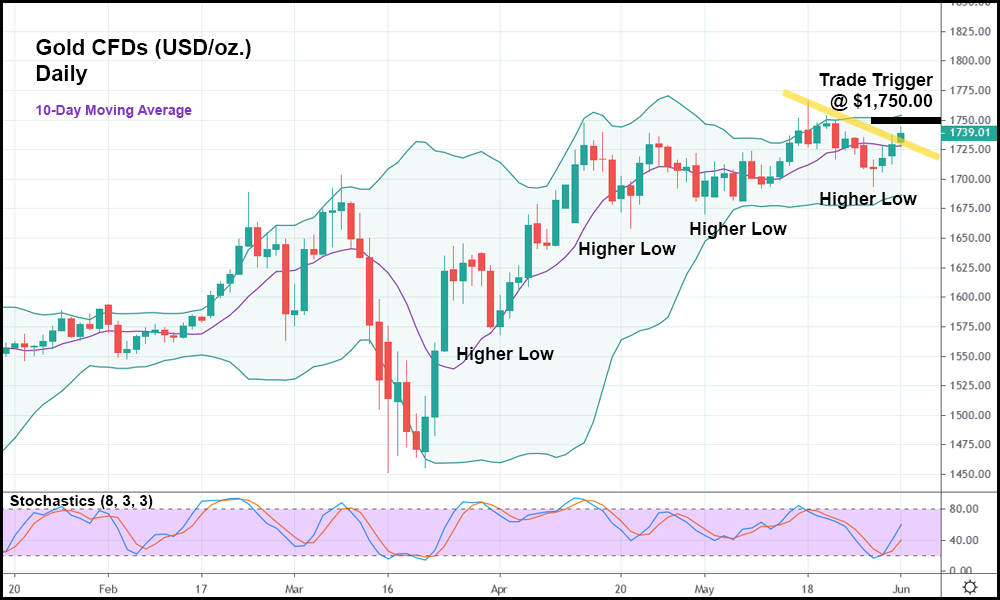 Since selling-off in mid-May, gold is now rising once again. Many investors saw gold as overvalued after skyrocketing in response to COVID-19 worries, but now that it’s had some time to breathe, gold is gearing up for another big move.

Just a few trading sessions ago, gold (in terms of U.S. dollars per ounce) set its fifth higher low – a bullish formation.

Today, it broke out above the 10-day moving average and its minor bearish trend (represented by the trendline in yellow).

Should gold trade above today’s high, it might be worth buying the precious metal with a trade trigger of $1,750.00.

Odds are that the uncertainty surrounding the U.S.-China relationship, riots, and coronavirus won’t go away in the near future. For investors in the general market, that’s bad news.

But for precious metals bulls, it’s music to their ears.