Stocks traded slightly higher this morning, rebounding after yesterday’s plunge. The Nasdaq Composite was up opposite the Dow, which fell at the open.

All in all, it was a good morning session for tech. But inflation – not the intraday tech rally – continued to dominate the market’s narrative following yesterday’s hotter-than-expected October Consumer Price Index (CPI) print.

“Inflation remains stubbornly high, to the surprise of many that expected prices to come back to earth sooner,” explained LPL Financial chief market strategist Ryan Detrick.

“The truth is you can’t shut down a $20 trillion economy and not feel some bumps as it restarts, but we are hopeful the supply chain issues will resolve over the coming quarters and inflation should calm down as well.”

But high inflation and supply chain issues have persisted. Yellen now thinks that both could remain until the second half of next year.

This prediction was made before the most recent CPI data, however. Yellen’s timeline may have changed dramatically in light of the October inflation surge.

“This is certainly telling us, I think, that price pressures are more persistent. They are broader. They are not just narrowly focused on those categories, whether it’s autos and the supply-constrained items. And it’s going to last longer than expected,” said Matthew Luzzetti, Deutsche Bank’s chief U.S. economist.

“We do think that the Fed is going to have to raise rates next year. They’ve signaled that they’re going to taper through the middle of the year, and that’s our baseline at this point. But if you continue to see price pressures like this over the coming months and more persistent, it may cause them to have to act earlier than expected.”

The Fed’s taper has already begun to the tune of $15 billion per month, reducing the central bank’s $120 billion in monthly asset purchases. And while that’s certainly a whole lot of money, it’s not necessarily all that hawkish, either.

A rate hike, on the other hand, would be a different story.

Don’t forget that when the going was good back in late 2018, Powell tried to raise rates. 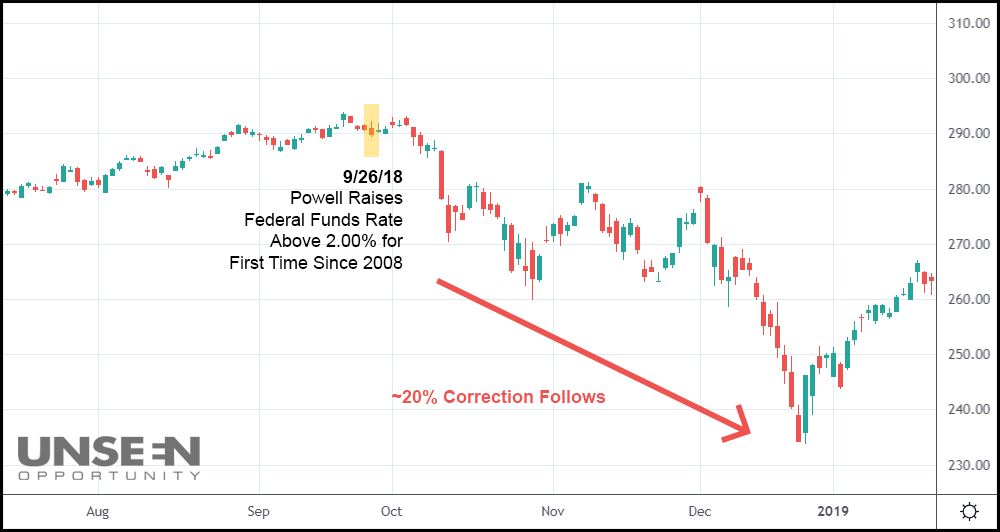 In response, the market sunk over 20% from peak to trough. By comparison, the Covid pandemic spurred on a 35% correction.

At the time, economists were concerned about signs of “economic softening” and argued that it would be unwise to raise the federal funds rate above 2.00%.

The truth of the matter, though, is that there was never going to be an ideal moment to get hawkish after almost a decade of uber-dovishness and quantitative easing (QE). When rates went up, stocks were going to fall regardless.

But Powell deserves a ton of credit for attempting to induce quantitative tightening (QT), the polar opposite of QE, with the economy in good shape relative to where it was from 2008-2016.

QE has often been compared to a roach motel. It’s been theorized that once your economy “checks in,” it can’t “check out.” Powell more or less proved that hypothesis to be true with his 2018 rate hikes. By July 2019, the Fed began to reduce rates once more, culminating with a targeted federal funds rate of 0.00%-0.25% on March 15, 2020, in response to the Covid pandemic.

The last time the Fed raised rates significantly, the economy was doing far better than it is currently. Inflation was not of any major concern. Supply chains were running smoothly, and shipping containers weren’t piling up outside the world’s major ports.

And yet the market fell by 20% in response to Powell’s September 2018 rate hike.

What’s going to happen when rates go up next time, and while the economy is caught in stagflationary limbo?

Bulls had better figure that out soon. Because before too long, Powell could increase rates again.

Resulting in a potentially even worse correction than the one sparked by Covid.