Stocks opened higher this morning as investors put inflationary fears behind them. A disappointing April jobs report initially sent the market lower this week, followed by a pair of “red-hot” inflation prints.

But now, bulls are trying to stage a short-term comeback. And though they were able to ignore the last crop of poor economic data, today’s newest report might prove too tall a bearish hurdle to leap. 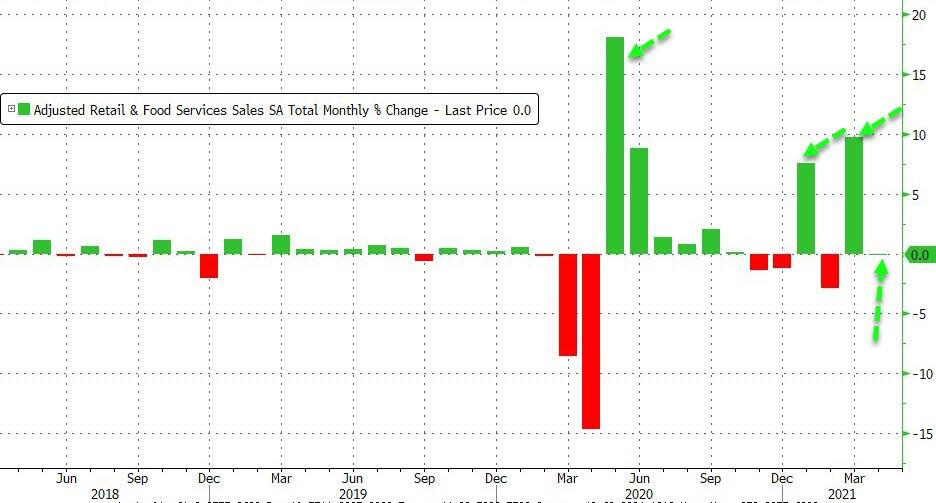 Retail and food sales growth came in flat (+0.0%), remaining unchanged month-over-month. Analysts expected a +1.0% increase by comparison. It’s a bit of a shock after March’s massive 10.7% growth, and while nobody would’ve predicted similar numbers for April, it’s not necessarily a good sign given the recent historic CPI and PPI increases. 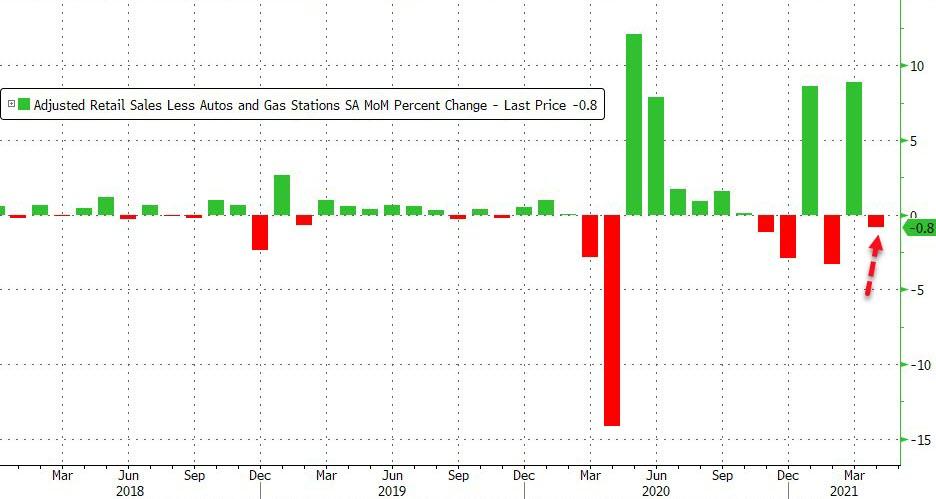 Motor vehicle & parts dealers enjoyed a 2.9% bump month-over-month, causing much of the disparity between core and headline retail sales growth.

Analysts, as usual, couldn’t be bothered by the latest “miss.”

“Higher inflation is likely to remain in the spotlight as the post-pandemic recovery accelerates,” explained Mark Haefele, chief investment officer at UBS Global Wealth Management, in a note.

“But while we expect inflation fears to generate bouts of volatility, and we continue to position for reflation, we also see such market swings as an opportunity to build exposure to structural winners.”

“The corporate turnaround is strong enough to keep markets rising, even as bond yields increase in anticipation of central bank tightening,” Buckland said.

“So buy any short-term dips, as we may be seeing now. There is a time to turn more cautious but that may be next year, not this.”

In other words, everything is fine. Inflation is merely “transitory.” Higher rates won’t spoil the party.

And stocks will only go up over the next year.

At this point, a bomb could go off and analysts would spin the nuclear fallout as “transitory.”

However, the market will eventually wonder why everything’s going so well despite conflicting economic indicators. April’s retail sales slump likely revealed the cause; trillions in stimulus provided by the government.

Last month, Americans had all but spent most of their stimulus checks. That caused retail sales growth to slow.

But longer-term, it becomes clear just how much government stimulus has helped retail. 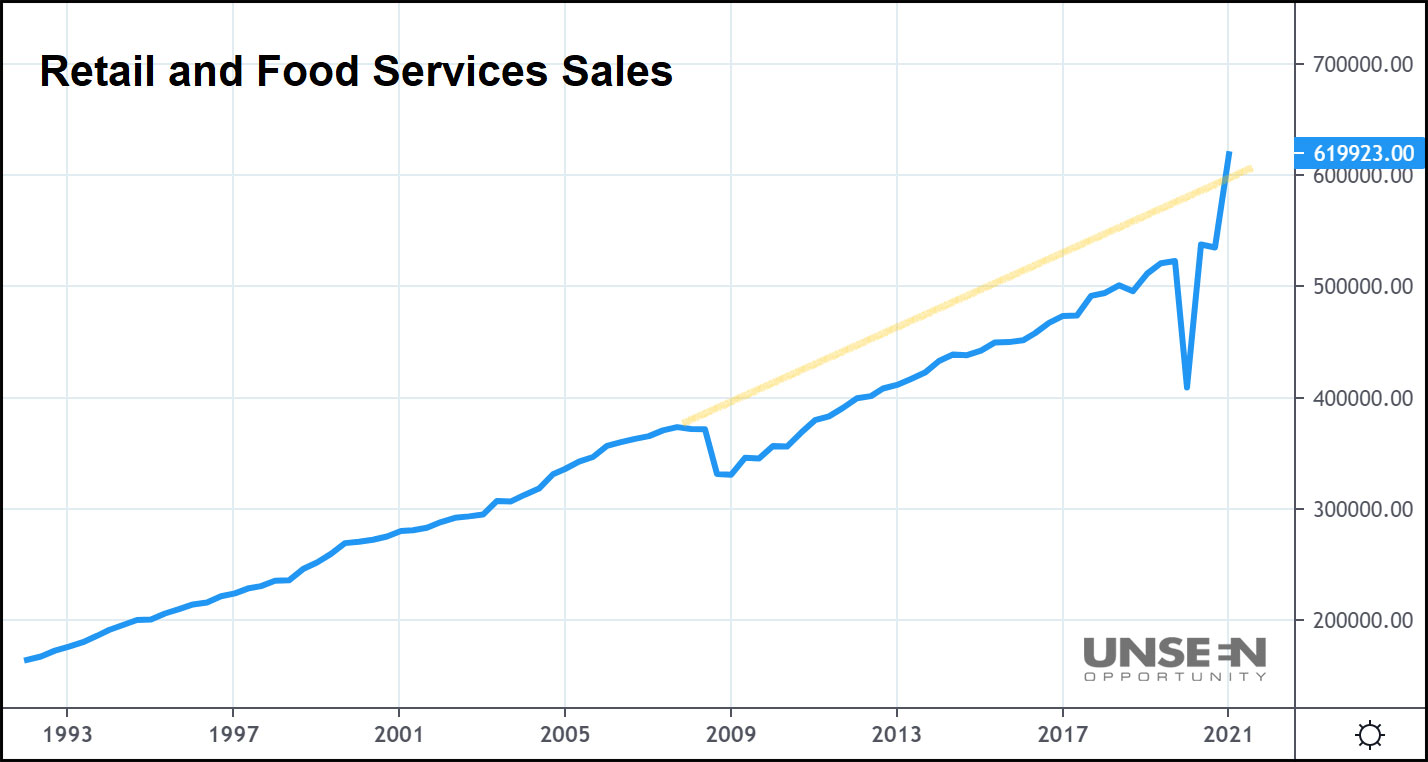 Retail and food services have lagged their pre-2008 trend ever since the Financial Crisis. Now, though, thanks to a glut of stimulus and liquidity, retail is back in line with its old trend after more than a decade of underperformance.

When tempered by the US’s monetary supply (M2), however, the results are far less impressive. 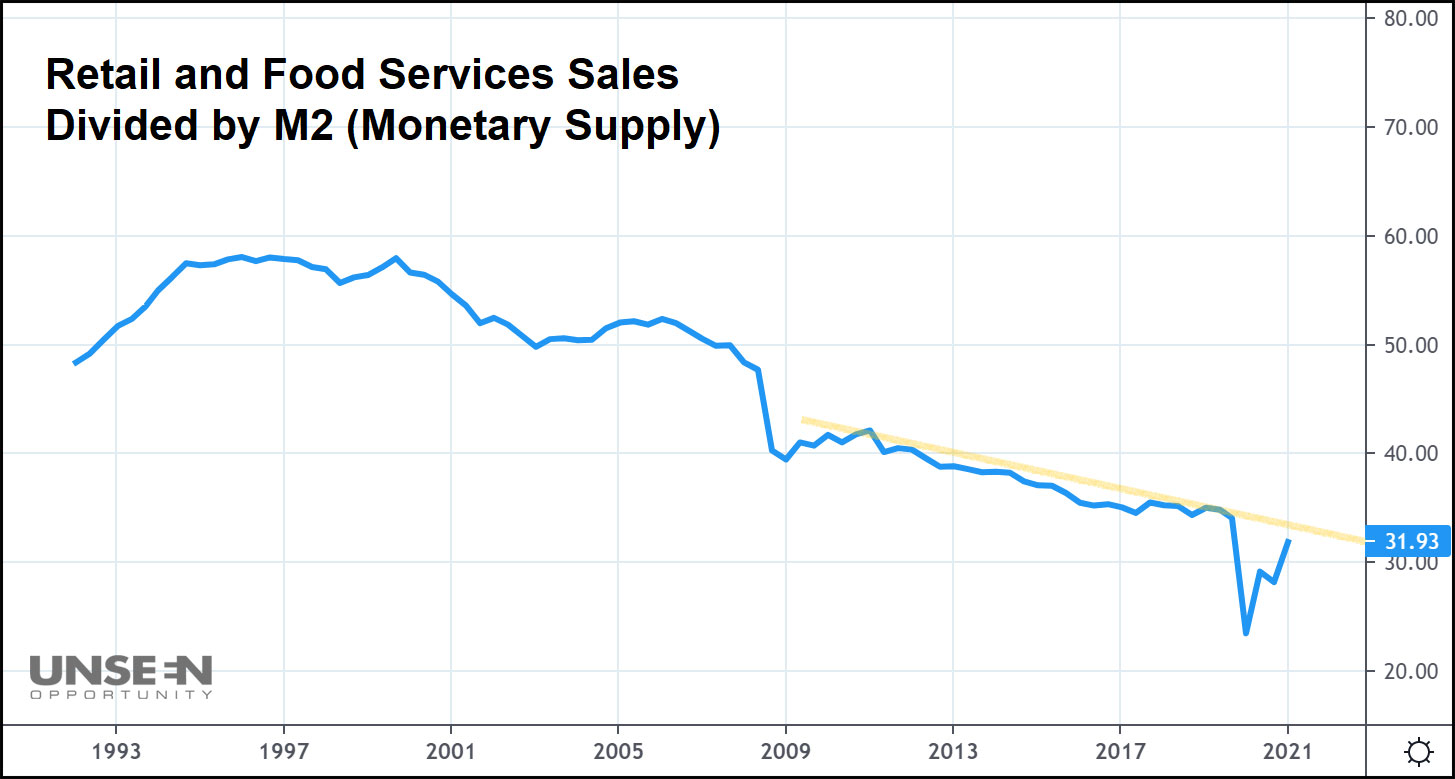 As seen in the chart above, not even the recent gains in retail sales have been able to offset the money supply increase. Retail is still slightly below its prior trend when adjusted for M2.

The key takeaway from all of this is that stagflation, an economic condition where inflation rises while demand stagnates, may be setting in. It’s too early to say whether stagflation is already here, but April’s disappointing retail sales growth opposite the high CPI and PPI readings could be the first sign of it.

Older investors may remember stagflation from back in the 70s, when President Nixon took the US dollar off the gold standard. At the time, foreign lenders increasingly wanted the US to settle its debts in gold, causing a number of major economic issues as government spending outpaced income.

Nixon’s solution was to untether the dollar from gold. In doing so, he released the “inflation genie from the bottle.” Nixon would’ve been stunned had he lived long enough to see its modern-day impact.

And now, government spending – which initially sparked the last period of stagflation – may make a repeat performance.

So, of course, stocks are up. Dip buyers are following Wall Street’s lead today, but unless the S&P makes a new high soon, this morning’s rally may simply be a “last gasp” for bulls.