The market got crunched this morning for a sizable loss as Dow components led the way lower. Only tech managed to escape relatively unscathed, boosted by plummeting Treasury yields.

But the big story of the day was the June manufacturing slump, revealed in both Markit’s Purchasing Managers’ Index (PMI) and the Institute for Supply Management’s (ISM) service purchasing managers’ index. 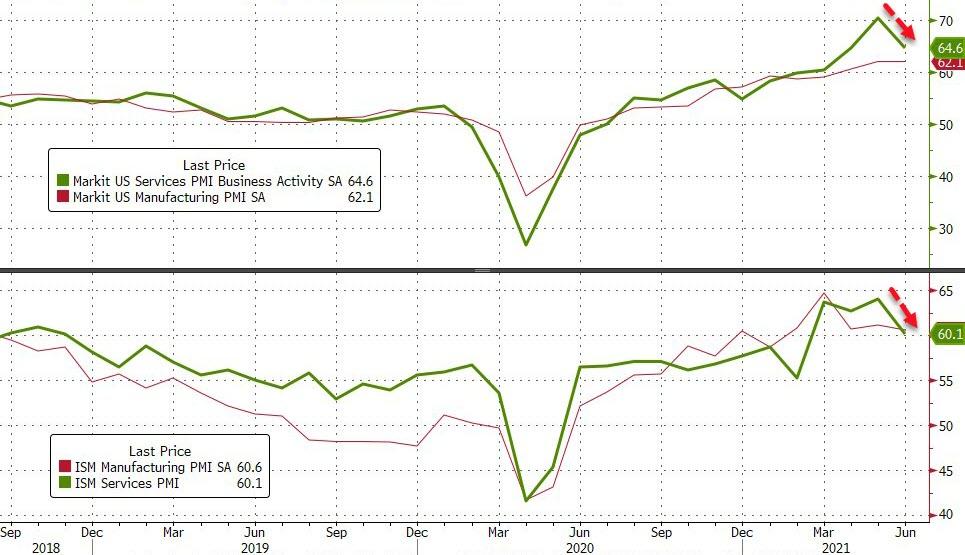 Markit’s PMI dropped from 70.4 to 64.6 while ISM services sunk to 60.1 from a recent high of 64.0. A reading over 50 indicates expansion. In this case, though, investors were not prepared for growth to slow. ISM component stocks got rocked shortly after the market opened.

Even worse, manufacturing costs continued to rise in June despite a reduction in both indexes. Raw material shortages, soaring oil prices, and supplier-related expenses were passed on to customers according to a panel of industry leaders.

It resulted in a monthly inflation spike that was the second-highest ever recorded by Markit.

“Many firms reported that business activity had been constrained either by shortages of supplies or difficulties filling vacancies. Backlogs of uncompleted orders are consequently rising at a rate unprecedented in the survey’s history, underscoring how demand is outstripping supply of both goods and services,” explained Chris Williamson, Chief Business Economist at IHS Markit.

“These capacity constraints are not only stifling growth, but also driving prices sharply higher. June saw the second-steepest rise in average prices charged for goods and services in the survey’s 12-year history, though some encouragement can be gleaned from the rate of inflation easing in the service sector compared to May.”

It’s something we observed last month upon the release of May’s Consumer Price Index (CPI). The US economy seemed like it was headed toward stagflation after a major hike in prices as demand expectations sagged.

Now, another sign of stagflation has emerged in June’s manufacturing data. Growth slowed significantly for the first time this year. Customer prices were up, too.

This caused both the 10-year and 30-year Treasury yields to plunge, falling below their June FOMC meeting lows. 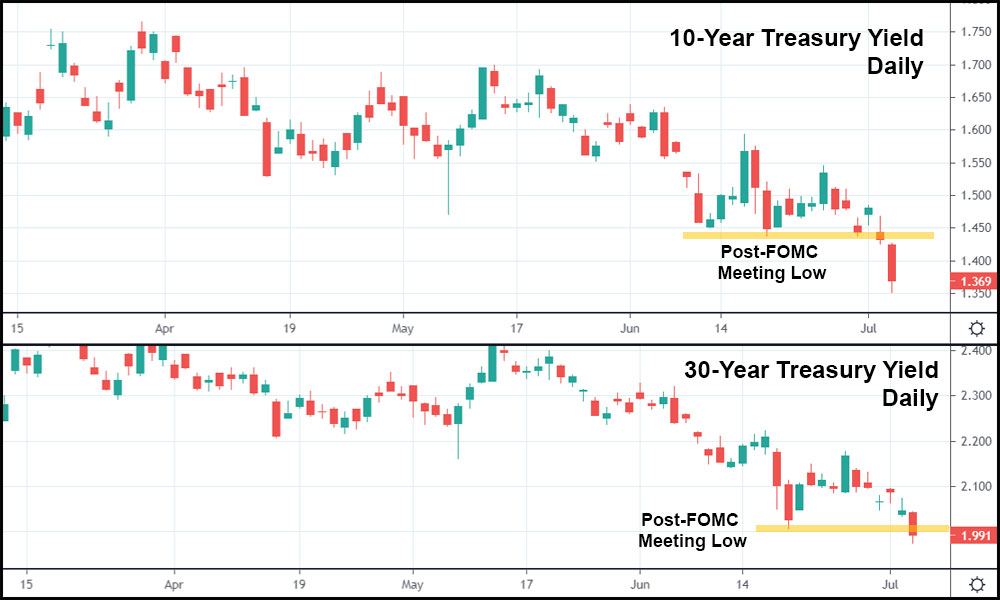 Gold initially gained on the day in response to the uncertainty, but shortly before noon, a surging dollar squashed precious metals.

And yields might fall even further in the event of a bond “short squeeze,” which would blast Treasurys higher (thus shrinking rates rapidly) when shorts are forced to cover their positions en masse. 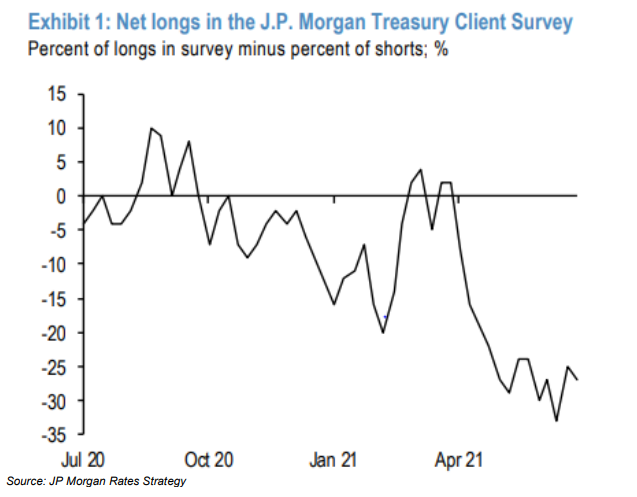 This is reflected in JP Morgan’s latest Treasury Client Survey. On the other hand, the shorts could be right and longer-term Treasurys will fall, pushing yields higher. But for the time being, traders don’t seem to believe that the Fed will keep rates elevated for long once it eventually decides to hike. That’s caused a flattening in the yield curve that may only get worse if shorts get squeezed out.

So, as usual, the market continues to operate in highly precarious territory. Manufacturing troubles seek to undo the once-overachieving Dow. Long-term yields are collapsing.

Growth stocks, somewhat unbelievably, can now be considered defensive as a result.

But will bulls be able to blast past this uncertainty and seek even higher highs for equities? They certainly could. With the Fed on their side, nearly anything’s possible.

Even with stagflation threatening to bring down the entire economy by year’s end.