After weeks of anticipation, investors learned today that the US economy added a whopping 850,000 jobs last month. New payrolls beat the consensus estimate of 720,000 with ease, signaling that the massive labor shortage may be drawing to a close.

“From a market perspective, this was an all-out positive jobs report,” explained Seema Shah, chief strategist at Principal Global Investors.

“The improvement today likely reflects a slight easing of the labor supply constraints that have been holding back the jobs market in recent months, as well as continued momentum from the economic reopening.”

But was it “too good” of a report? Don’t forget that Fed Chairman Jerome Powell has said several times now that he’s watching employment – not inflation – as the key metric to determine monetary policy. The Fed’s dovish stance is likely to remain intact until “full employment” has been achieved – something both he and Treasury Secretary Janet Yellen desperately desire.

So, did the June jobs data bring the US any closer to reaching that goal?

Oddly enough, no, it did not. Economists estimate full employment – a period in which everyone willing to work can find a job at the going wage rates – would put the unemployment rate somewhere around 3.5%, which is where it was in February 2020 prior to the Covid pandemic.

But instead of dropping, the unemployment rate actually increased from 5.8% in May to 5.9% in June despite the jobs “beat.”

It’s all because job leavers, folks who chose to leave their jobs to seek new employment opportunities, rose by 164,000 last month to 942,000. The long-term unemployed (who have been unemployed for 27 weeks or more) jumped by 233,000 to a total of 4.0 million.

And though that might seem like a negative, it was just what bulls needed from the jobs report. They got a better-than-expected jobs add opposite an increase in the unemployment rate. This gave the market something to gawk at (a big payrolls beat) while rising unemployment kept the Fed at bay.

However, that doesn’t necessarily mean the data is worth celebrating. Yes, the US economy may be starting to move past a period of chronic labor shortage.

But the country is still down 7.62 million jobs from where it was pre-Covid. 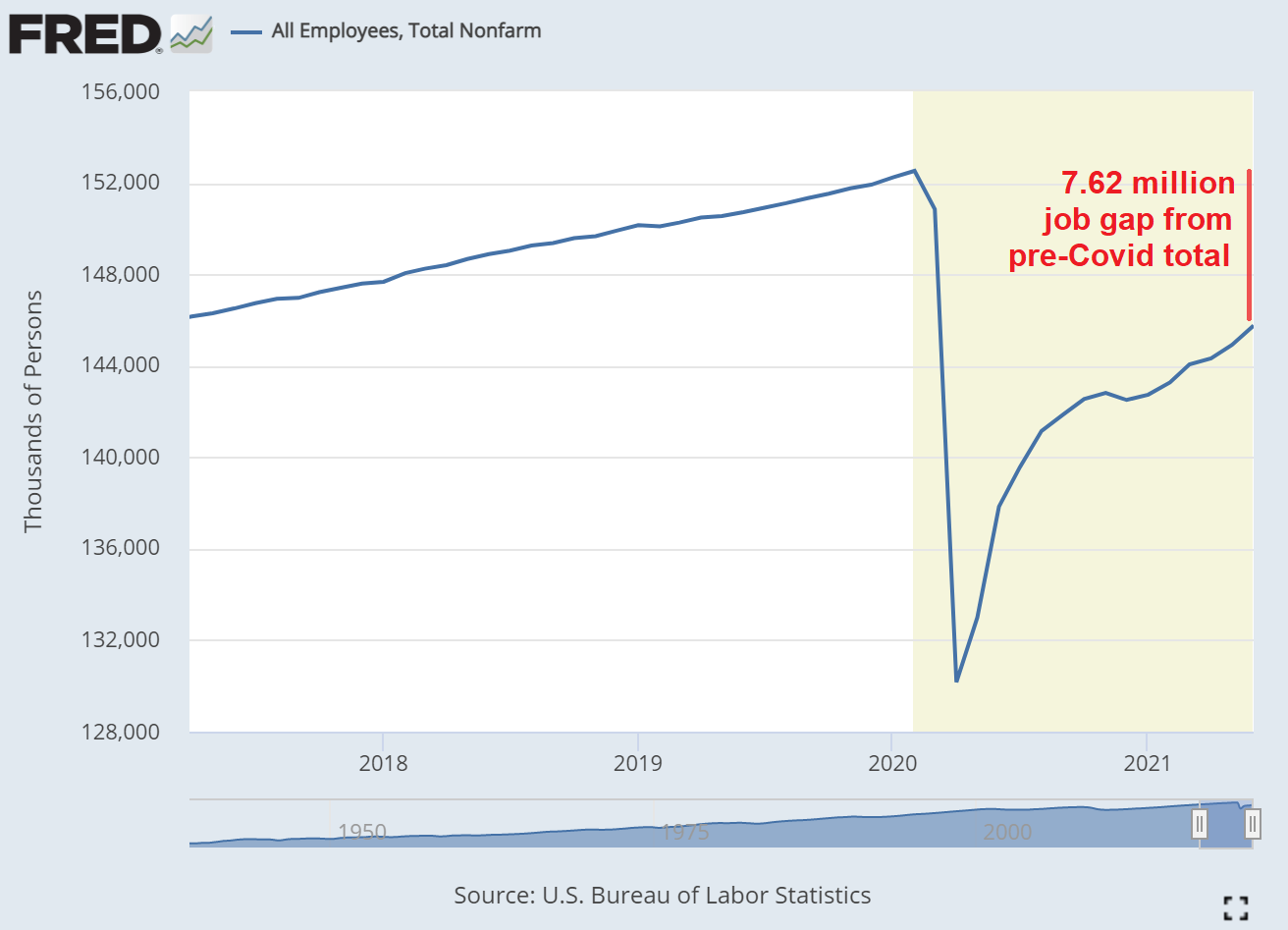 And the unemployment rate refuses to budge.

Overall, the jobs report was a bit of a wash in terms of raw data. How it looks from a bull’s perspective, however, is virtually perfect.

Yet equities are only up modestly this morning in response.

Scores of analysts have been calling for a market correction, even a relatively small one, for weeks. Investors witnessed a few rapid drops (that were immediately filled) following hints at a more hawkish Fed, but in general, bulls have been in complete control.

Will today’s jobs report reaction be the “last gasp” before a sell-off? It certainly could be. On the other hand, bulls haven’t let stocks sink since the Covid rally began.

Traders need to ask themselves, though, how much further stocks are going to climb before they take a breather. The June jobs data suggests that the Fed won’t be tapering any time soon. Full employment is still a distant goal.

But that doesn’t mean Powell & Co. will ignore other economic imbalances forever. An out of control repo market, enormous housing bubble, or flattening yield curve may eventually weigh heavy on the Fed’s conscience well before full employment is reached.

Provided, of course, achieving that level of unemployment is even possible in a post-Covid, post-stimulus world.