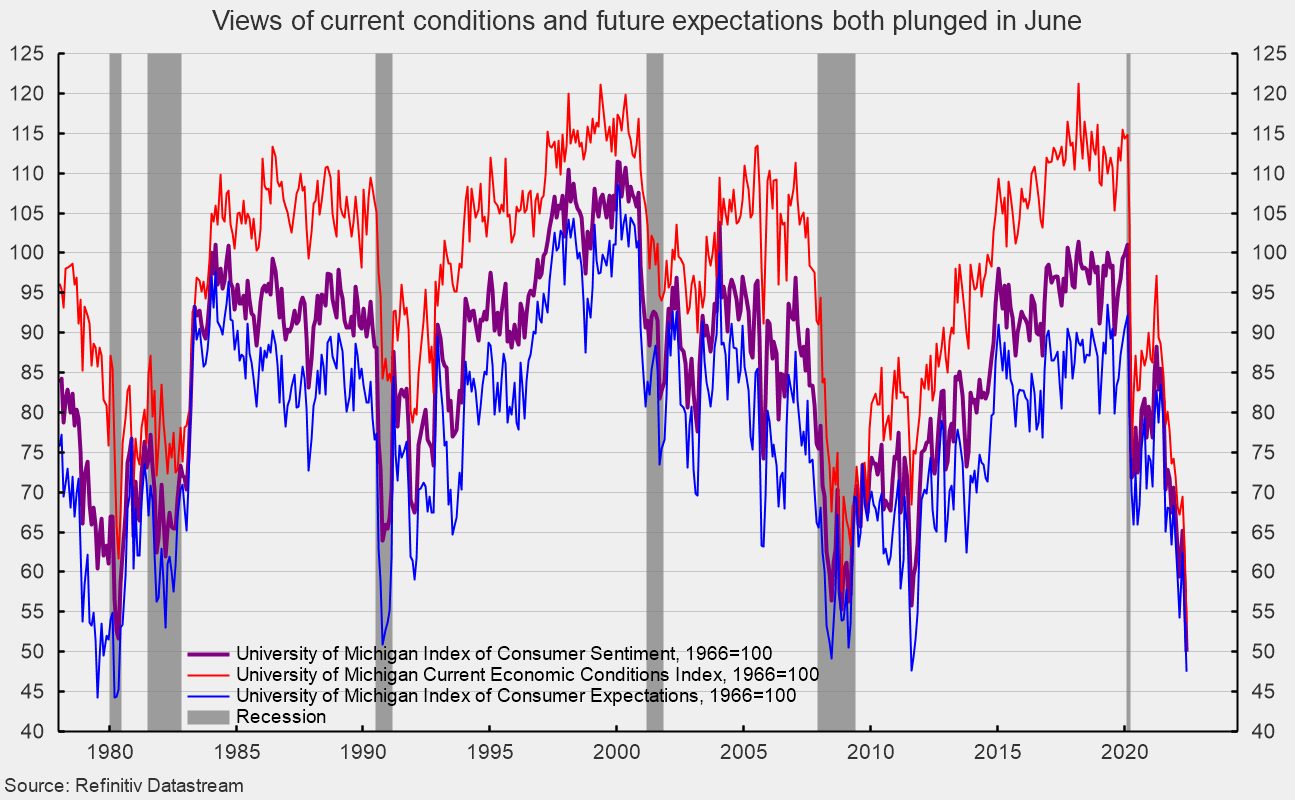 The University of Michigan Survey of Consumers tumbled to a record low in June, dropping from 50.2 in May to 50.0. Inflation expectations over the next 5 to 10 years moderated to 3.1% (down from 3.3% in May) while inflation expectations during the next year fell to 5.3%, down from 5.4% from a preliminary reading earlier this month.

“Overall, the late-June reversion in long run inflation expectations was generated by growth in the share of consumers expecting extremely low inflation in the years ahead,” said Joanne Hsu, director of the survey.

“About half of these consumers expressed bleak views about the risks of recession or unemployment during the interviews.”

Worse yet, consumers see a significant downturn in buying conditions for the remainder of the year.

“About 79% of consumers expected bad times in the year ahead for business conditions, the highest since 2009.”

Hsu concluded that the survey’s findings suggest “continued pessimism on both personal finances and the economy could dampen consumer spending going forward.”

All in all, it was a “goldilocks” survey in that it pointed toward falling long-term inflation expectations alongside a more immediate slump in demand. If both trends hold, the Fed should have a clear path to a rate hike halt sooner than initially expected.

“We’ve seen a two week drop in commodity prices and now we are seeing Fed funds futures pricing in rate cuts out in 2023. The thing holding back the market was endless rate hikes, if we’ve found the terminal rate then stocks can make headway here,” said Baird strategist Mike Antonelli.

Halley warned, however, that today’s gains may simply be a product of old habits dying hard:

“The moves this week could still turn out to be the result of a financial market genetically preprogrammed to buy dips in equity and bond prices, thanks to two decades of central bank largess. It could also be a bear market correction as the stampede for the exit door got overdone in the short term, leading to a short-squeeze.”

Short-squeeze or not, it’s undeniable that bulls have come flooding back now that recession talk is on the table.

Will the market’s recent gains stick, though? Probably not. But while the going’s good, traders might as well get going on long positions, albeit with the mentality to bail at the first sign of trouble.

Don’t forget that it’s all about “peak selling” in bear markets. Dip-buying, a successful bull market strategy, is a losing proposition when bears are in control.

And, long-term, they still hold the reigns despite the recent excitement over an impending, rate hike-killing recession. Which, contrary to the consensus estimate on Wall Street, is probably going to arrive sooner than most analysts think it will.