Today, however, stocks refuse to budge. But that shouldn’t come as much of a surprise given how much stocks rose Friday. Muted trading sessions tend to follow major single-day moves.

But that didn’t stop analysts from downplaying the idea that a bigger bear market rally is approaching.

“In these kinds of bear market rallies, it’s more about things getting a little too oversold, a little too negative. But those aren’t enough on their own to really sustain the rally, they just can provide relief in pockets,” said Baird’s Ross Mayfield, who incorrectly argued that there was no clear reason why stocks rallied Friday.

The Consumer Sentiment Index caused shares to jump higher, as it indicated that a recession may be closer than Wall Street previously assumed it was. A more imminent recession could force the Fed to flip dovish and halt its rate hikes before eventually kicking off another round of quantitative easing (QE), which bulls have historically loved.

This concept was apparently lost on high-profile analysts, some of whom offered similarly disappointing takes concerning Friday’s surge.

“The concerns that caused the index to fall into bear market territory earlier in June have not gone away—including worries over the pace of rate rises, the threat of recession, and political risks,” said UBS equity strategist Christopher Swann.

“While the most probable single scenario, in our view, would feature an economic soft landing and market stabilization, sentiment is likely to remain fickle, and this is not a market to position for any one scenario with high conviction.”

ING analysts, however, managed to accurately articulate the situation in a morning note to clients.

“The S&P 500 is nearly 8% up from its lows at the start of the month and rallied 3% on Friday. Helping the rally has no doubt been last week’s repricing of tightening cycles around the world where 25-50 basis points of expected tightening were removed from some money market curves in just a few days. Driving that pricing seemed to be the much broader discussion — including from Federal Reserve Chair Jerome Powell — over the risks of recession,” the note read.

That’s not to say the bear market is over. Stocks will probably head for lower lows this year.

But, at this point, a stronger bear market rally should be expected. The S&P just had an important, momentum-breaking trading session on Friday. Today’s tepid price action doesn’t change that. 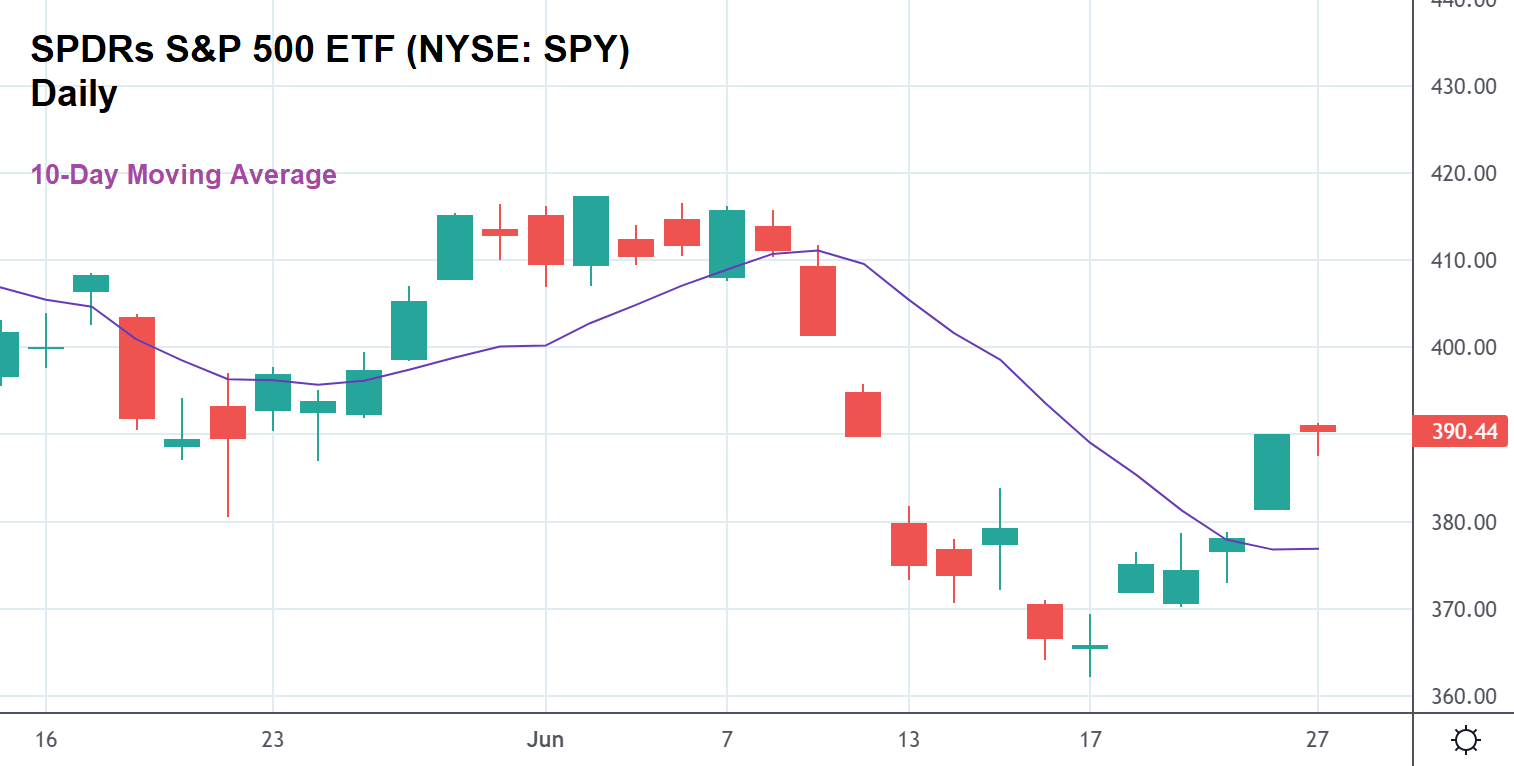 The 10-day moving average (10-SMA), a short-term trend identifying indicator, was finally breached when the S&P (as represented by the SPY) closed above it on Friday. Historically, that’s been a great indicator of a coming rally.

Even during a bear market.

The last time it happened (back in May) the rally ultimately failed. But traders who went long above the 10-SMA were able to snag some quick gains before stocks fell again.

Should the S&P close significantly higher again tomorrow, further gains could easily follow regardless of the market’s longer-term issues.