Stocks opened for a big loss this morning after Japan declared a state of emergency. Covid numbers are up in the land of the samurai, and with the Olympics quick approaching, government officials are scrambling to keep infections down.

Japan’s even considering barring all spectators from events if conditions don’t improve by July 23rd, the official start date of the delayed 2020 Summer Olympics.

But perhaps the most alarming aspect of this morning’s initial plunge was just how far stocks fell at the opening bell relative to today’s market breadth. 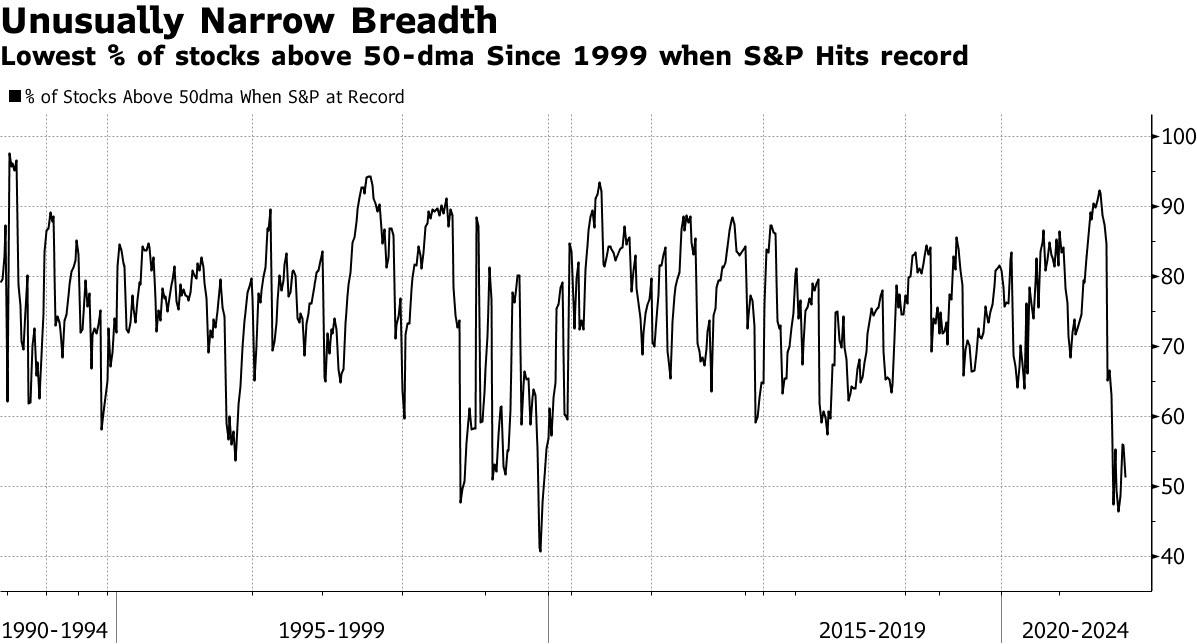 Market breadth – the number of stocks participating in a given move by an index or stock exchange – came in very low, or “narrow.” In fact, market breadth hasn’t been this narrow since 1999, immediately prior to the bursting of the Dot Com Bubble.

The narrow breadth contributed to the fourth-worst open in the market’s history as investors unilaterally dumped a handful of top-flite stocks, dragging down the rest of the market this morning.

“Based on futures trading, today’s open resembled the bloody open of Oct. 28 of last year when the S&P 500 opened down 1.42% during a particularly volatile time ahead of the U.S. Presidential election,” explained Bloomberg’s Kriti Gupta.

“That was also a period when Covid cases on both sides of the Atlantic were accelerating and the vaccine announcement still hadn’t happened. That day ended up being the worst stock rout in four months.”

By noon, however, stocks had pared back much of their early losses. The S&P finished the day down 0.86%.

Making matters worse was another dip in long-term Treasury yields. JP Morgan went so far as to say that “the continuous rally in [US Treasurys] continues to surprise both ourselves and our clients.” Just yesterday, the bank observed that Treasury traders have never been shorter on Treasurys.

And yet long-term Treasurys continue to rise, pressing yields lower. A “short squeeze” on Treasurys may soon follow as shorts panic-cover their positions, absolutely squashing yields when all is said and done.

The market has historically enjoyed falling rates. But that doesn’t mean a sudden yield collapse would go over well with bulls. Investors don’t like it when the yield curve flattens rapidly.

In the event of a long-term Treasury short squeeze, that may be exactly what happens.

Oh, and did I mention that China may be cutting rates in anticipation of an economic slowdown? Oil’s up again, too, threatening a run to $100 per barrel – something that would slice into the ongoing Covid recovery.

As has been the case for weeks, the market seems primed for a near-instant correction. Narrow breadth, unusual Treasury activity, spiking oil prices, and rising Covid cases in Japan have bulls eyeing exit points.

And, at the top of a massive rally, this certainly seems like a good place to take profits.

Today’s dip was partially filled, yes, but another bad open could spell disaster for equities.

Even without a Treasury short squeeze to shock stocks into a yield-driven crash.