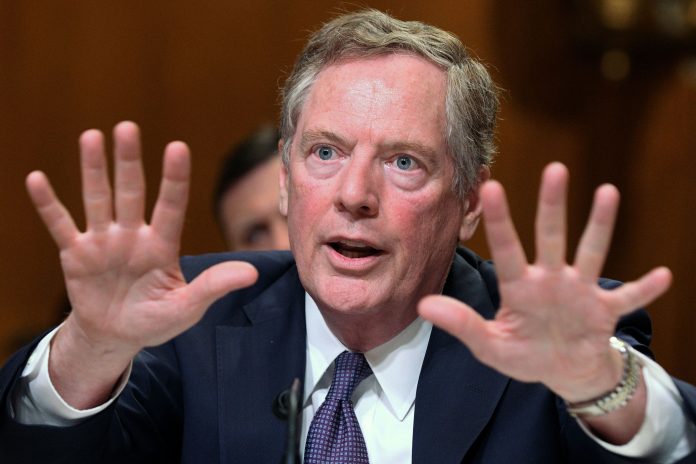 Negativity continues to creep into equities this morning, as U.S. Trade Representative Robert Lighthizer hinted that there was more work to be done on a U.S.-China trade deal. Just a few days ago, statements from the White House and China made a swift, satisfying agreement seem like a near certainty.

But now, after some candid remarks from the U.S. trade contingency, the “slam-dunk” proposal so many bulls were hoping for looks like a pipe dream, during a busy news day in which Trump’s former lawyer (and proven liar) Michael Cohen testifies in front of Congress.

Investors were particularly displeased with Lighthizer’s comments about what China brought to the bargaining table, or more specifically, what they didn’t. There was no mention of bad behavior correction – i.e. the prevention of intellectual property theft by Chinese corporations – which arguably caused the trade war in the first place. China’s offering to reduce the U.S. trade deficit via some major purchases, but it won’t be nearly enough to please Trump’s team nor prevent a future tariff hike.

Even if the two sides strike a deal, Lighthizer added that it would be a “long process” to implement any new measures agreed upon in March.

The market thought so too, as evidenced by the Dow’s 150-point drop this morning after Lighthizer’s remarks to the House Ways and Means committee.

He was followed by Fed Chairman Jerome Powell, who just one day ago addressed the Senate with a laundry list of comments that only confused investors. He gave an encore performance today, telling the House largely the same things he told Senators yesterday – the U.S. economy is strong, but faces several dangers.

More importantly, though, he didn’t say anything that would produce a visceral reaction in the market – a smart move during what is shaping up to be a bad trading session for bulls.

“If his goal was to make it as boring as possible so as to not disturb markets, he succeeded,” said Ed Yardeni, who serves as the president and chief investment strategist at Yardeni Research. “That’s a compliment because Powell’s previous off-the-cuff style caused a lot of market havoc. Powell has learned during his short tenure as Fed chairman that consistent messaging is key.”

Yardeni’s absolutely right in this case. Powell has taken his lumps over the last few months as his October rate-hikes kicked off a major plunge to close out the year. Similarly, his dovish shift in early January contributed to a post-Christmas rally – one that persists to this day, but teeters on the edge of collapse as external pressure starts to close in on American equities.

If investors have learned anything this week, it’s that both men in the news today – Lighthizer and Powell – are sitting on the market’s doomsday switch. Any false move by either of them could instantly torpedo the current rally, which just encountered a point of key resistance on several major indexes – the November 2018 high.

If stocks can’t break through here, and the selling really gets going in the wake of trade war (or Fed) induced stress, equities could have a long way to fall before they find their legs, regardless of whether Trump can force the Chinese to meet his demands or not.