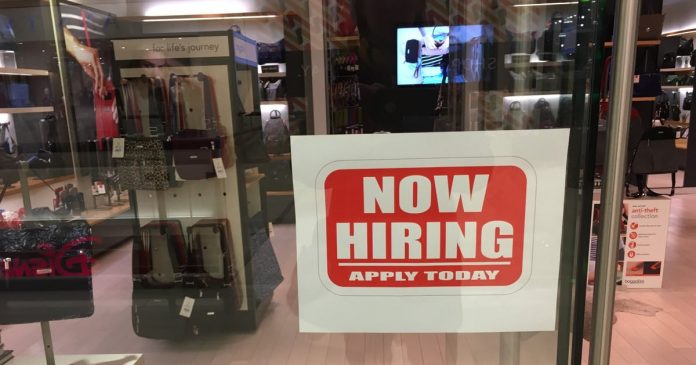 After seeing impressive job numbers in April, investors were feeling confident about the U.S. economy. Q1 GDP growth was far better than expected as well, and yesterday, Fed Chairman Jerome Powell hinted at another rate decrease.

Optimism was riding high, ignorant of the recent market correction and Mexico tariffs.

Who cares about the trade war if all indicators are flashing “green”, anyway?

As of midday today, however, it’s back to reality for hopeful bulls. The May jobs report released this morning, falling well below analyst estimates and disappointing Wall Street firms across the board.

Private payrolls rose only 27,000 last month according to ADP and Moody’s, way short of the expected 173,000 reading. It’s the lowest increase since March 2010, when the jobs market bottomed with a loss of 113,000. Since then, payrolls are up a staggering 21.3 million.

Corporate America, however, made out much better – adding 68,000 total jobs.

“Following an overly strong April, May marked the smallest gain since the expansion began,” remarked Ahu Yildirmaz, vice president and co-head of ADP.

“Large companies continue to remain strong as they are better equipped to compete for labor in a tight labor market.”

Analysts are cautioning investors to not get overly worried about the disappointing jobs report, saying that the numbers don’t necessarily equate to a weakening U.S. economy.

More importantly, investors should look at the average job gain over the last two months. Keeping up with 271,000 payroll adds from April was never going to happen in May, as “too many” people were hired onto new jobs back then to sustain growth at that rate.

And thus far, investors have reacted appropriately. The major indexes continue to rise, seemingly unfettered by this morning’s report.

Because as usual, Jerome Powell has “stolen the show” yet again. During his address last night, he said that the Fed is prepared to “act as appropriate”, thinly veiling another possible rate cut in 2019. Equities soared as a result, thanks to some arguably oversold conditions and Powell’s new stance.

It’s a huge change from his “no rate alterations” positioning we saw earlier in the year, and even a bigger shift from his posture in late 2018, which resulted in a rate hike that torpedoed the markets.

As usual, the most important man to investors isn’t Donald Trump, nor is it Xi Jinping. Or even any other head of state.

It’s the Chairman of the Federal Reserve.

Powell’s decisions to manipulate rates are without a doubt the biggest influence on equities these days, and the sooner investors realize that, the better – if only to break free from buying and selling on trade war headlines.

It’s an extremely stressful way to trade, and nobody got rich (in the long run) by investing around the 24-hour news cycle – an invention of the 21st century that could drive anyone batty, whether they had money riding on it or not.