The market’s trading flat today as investors await corporate earnings. With America’s top companies set to report in the coming days, it seems like stocks could go either way. Volatility, short squeezes, and Covid uncertainty already have equities in a precarious spot.

That means this earnings season could be critical for a bull run continuation.

General Electric (NYSE: GE) got things started on a positive note this morning when it reported better-than-expected free cash flow. GE leadership then added a rosy outlook for the rest of 2020, encouraging investors to buy the industrial stock at the open. GE shares traded as much as 11% higher on the day before giving back most of those gains by noon.

“I’m incredibly proud of our Johnson & Johnson teams around the world for going above and beyond to meet stakeholder needs,” said CEO Alex Gorsky in a press release.

“We continue to progress our Covid-19 vaccine candidate and look forward to sharing details from our Phase 3 study soon.”

Microsoft (NASDAQ: MSFT) is set to report after the close this afternoon. Bulls, in anticipation of a strong quarter, sent MSFT shares 1% higher this morning. If they don’t get a positive showing from the tech giant, reactionary selling could dislodge the stock from its all-time high.

More importantly, a tech correction could shake-up the rest of the market as well. Evidence of extreme “froth” in stocks like GameStop (NYSE: GME) and AMC Entertainment (NYSE: AMC), which endured wild price swings as a result of short squeezes, had some analysts concerned about the current rally’s longevity.

“The short squeeze/volatility we saw in heavily-shorted stocks such as GameStop and others yesterday only further confirms that, at least in the near term, complacent/frothy investor sentiment is the biggest near-term risk to stocks,” explained Tom Essaye, founder of The Sevens Report, in a note.

Investors may be able to overlook the recent volatility if corporate earnings continue to impress, potentially kicking-off a several-month-long uptrend supported by stimulus and a drop in Covid infections.

That does not, however, rule out a short-term correction along the way.

In a note released by Morgan Stanley this morning, the bank’s strategists drew some grim comparisons between the current state of the market and how it behaved in 2009 following the Financial Crisis. 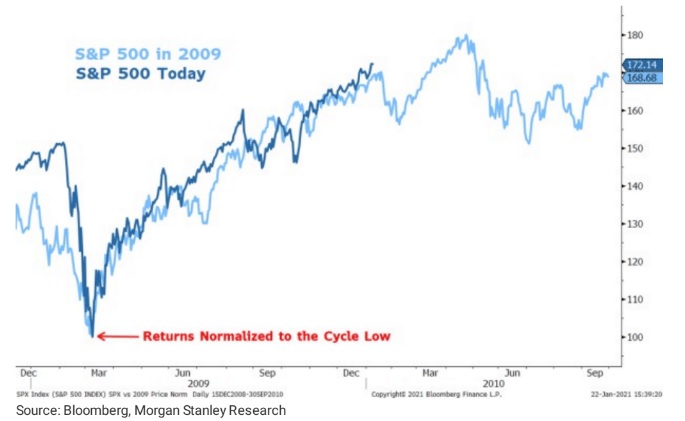 In uncanny fashion, the S&P 500 has traced its 2009 performance almost note-for-note. It even bottomed in March on nearly the same day during both crashes.

“[This chart] shows how closely the S&P 500 has followed the 2009 analog until now. It appears ready to enter a long consolidation period that would support our call for better earnings offset by some multiple compression,” the note read, citing the market’s current Dot Com Bubble-like P/E ratios.

“Bottom line, we expect a correction/consolidation in the S&P 500 to begin imminently.”

We’ve long said that stocks are out of whack and that a sell-off would eventually have to occur in order for equities to return to a more reasonable place. Morgan Stanley’s observation is that it’s going to be here sooner than expected, even with another round of stimulus on the docket.

Selling right now might be a little premature, but be wary of future hazards. Once equities start to break out of their trend, a correction – or a consolidation – could follow. Either outcome seems likely at this point, meaning that traders need to be ready to pull the plug.

Because now, arguably more than ever, investors the world over are waiting to sell their post-Covid holdings. They just need a good enough reason to do so.

A sudden market downturn, akin to 2009’s quick drop, would provide that in spades.