Stocks surged in response to the data from the Bureau of Labor Statistics before falling around noon. However, the Dow (+0.40%), S&P (+0.50%), and Nasdaq Composite (+0.50%) still finished higher to close out the week.

“What we’ve seen in May and June is a blueprint for a fast recovery, but only once the virus situation is under control.”

Some analysts aren’t as convinced, though. Megan Hornemann, director of portfolio strategy at Verdence Capital Advisors, was dismayed by last week’s initial jobless claims, which investors learned this morning rose by 1.427 million.

“There’s a disconnect there, when you look at the two numbers,” Horneman said, referring to the June jobs report and unemployment claims.

“It does show you there is some distortion in the data […] I don’t think the true underlying picture of the labor market will be clear for several months.”

But the big story today, and what ultimately forced the market to give up some of its early gains, was another spike in coronavirus cases. The entire U.S. confirmed 50,000 new infections on Wednesday. 10,000 of them were found in the state of Florida alone.

And after the market closed, Texas issued a statewide order requiring face coverings for its citizens. As a decidedly “red” state, the decision to do so won’t be well received by conservative Texans.

A holiday weekend upon us, too, and millions of Americans are desperate to congregate in the warm summer weather. The number of confirmed cases – and hysteria – should only increase.

Plenty can happen over the course of three days. If bulls start to lose hope, Monday’s trading session could turn ugly. And fast.

That’s why short-term traders need to be ready with new trading opportunities, particularly for stocks in industries that will be harshly affected by a continued outbreak. 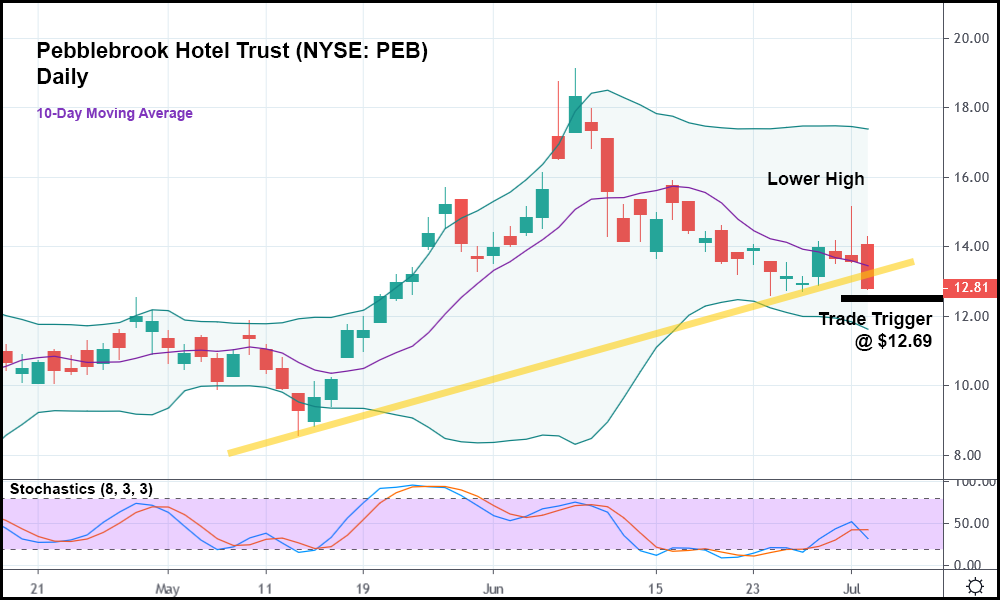 Pebblebrook Hotel Trust (NYSE: PEB) is a real estate investment trust (REIT) that owns a number of different hotel properties. The stock, like many other REITs, soared after re-bottoming in mid-May. PEB eventually topped out in early June, marking a 120%+ trough-to-peak gain.

Since then, however, the stock has dropped off significantly. It crossed under the 10-day moving average back in mid-June, and after failing to rally yesterday, has plunged beneath its bullish trend.

For that reason, it might make sense to go short on PEB with a trade trigger of $12.69 should it trade below today’s low.

As a hotel REIT, PEB has plenty to lose from another round of “coronamania.” Sadly, that looks like the direction the market’s headed these days.

Even with a big June jobs report in tow.