The market sunk again today as tech stocks continued their sell-off. The Dow (-2.30%) and S&P (-2.80%) both dropped while the Nasdaq Composite suffered a stunning 4.1% plunge.

With the tech rout in full swing, investors are left wondering when – or even, if – the carnage will end.

The “biggest loser” of the day, however, had to be Tesla (NASDAQ: TSLA), which cratered for a daily loss of 21.06% – the worst in the company’s history.

Think that’s bad? Some analysts say the market has more selling in its future.

“Given how extreme many of the indicators we follow had become by early this past week, we believe it will take more than just a mild decline to work off those conditions,” said Matt Maley, chief market strategist at Miller Tabak, in a note.

“Therefore we still believe a correction of more than 10% is probable.”

Thus far, the Nasdaq Composite is already down 10% from its all-time high. The Dow and S&P have another 4-5% to go to match the Nasdaq’s losses.

More immediately, though, investors are trying to figure out whether the rest of the market will fall right alongside tech.

Or, if a major rotation is on its way.

“Unlike in 2000, the largest tech firms today are highly profitable, and their valuations, while punchy, don’t look so obviously unsustainable,” said Capital Economics’ Jonas Goltermann, downplaying comparisons between the current tech slide and the dot com bubble of 2000.

“So while this correction may well have further to run, and we continue to think that tech stocks will fare less well than most other sectors as the economic recovery continues, we don’t expect that a collapse in tech stocks will drag down the entire market in the way that it did in 2000-02.”

What might keep falling, on the other hand, is a different group of stocks entirely, which also got rocked for a big decline in today’s trading sessions. 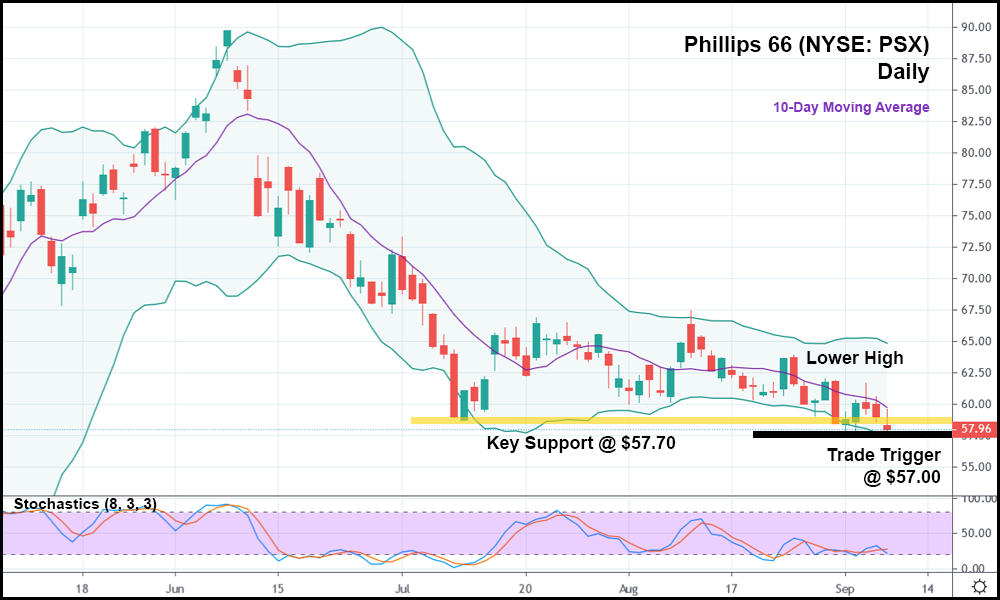 As crude oil prices dropped, so too did plenty of oil stocks. What came out mostly unscathed, however, was Phillips 66 (NYSE: PSX), which seems ready for a dramatic collapse after breaking through key support at $57.50 – a price level that PSX finally closed below today.

Now, with PSX trading well below the 10-day moving average and support, it’s got “bearish breakout” written all over it. Especially considering that PSX’s peers have dropped much farther than it has.

For those reasons, should PSX trade below today’s low by a significant amount, it might make sense to take the stock short with a trade trigger of $57.00.

Best of all, crude looks ready to dive lower as well, meaning that PSX should get pulled down with it.

Even if other “value” sectors are rising while tech falls.