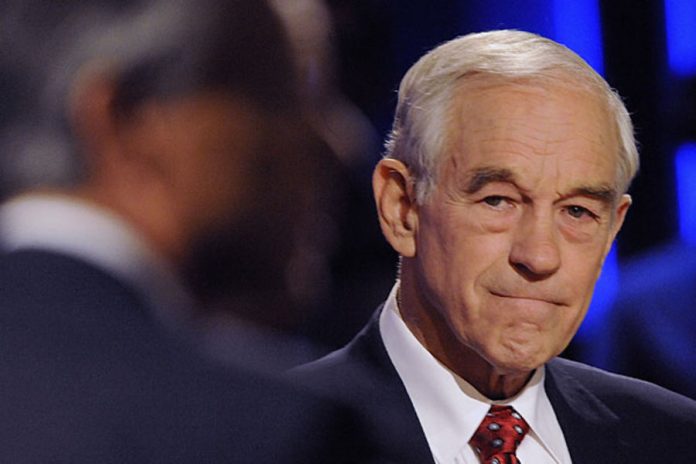 Brent crude oil prices skyrocketed this morning after the Saudi oil industry was attacked on Saturday. Hitting key locations in a coordinated maneuver, yet-to-be identified forces have cut the country’s output in half. Trump says he’ll release oil from the Strategic Petroleum Reserve to keep the market “well-supplied”, as intelligence agencies scramble to find who’s at fault for the surgical strike.

But what investors should really be focusing on today is a recent statement from former Republican Texas congressman Ron Paul, who commented on the dangers of negative interest rates.

In particular, he’s worried that the U.S. could get caught up in the rest of the world’s irresponsible rate handling.

“We will join the rest of them and go to total negative rates in hopes that that will be the solution,” Paul said in an interview on CNBC.

It’s something we’ve talked about here several times, now, that negative yielding debt has put plenty of investors – both retail and institutional – in a very precarious spot.

Should the European economy recover, for example, and yields spike on bonds, Euro-bondholders could stand to absorb massive losses across the board.

Paul, a former presidential candidate and staunch libertarian, also believes that the Fed has worked itself into a helpless position. Furthermore, he doesn’t see anything beneficial coming from this week’s Fed meeting, as another rate cut would just make the problem worse.

“You can’t predict exactly where the creation of credit goes,” Paul said.

“We have a ton of inflation with all that QE [quantitative easing]. And, every time you lower interest rates below market levels and create new credit, that’s a bubble.”

But this isn’t the first time he’s predicted a calamitous bubble. In fact, last October, Paul thought a bubble was forming when the 10-year Treasury note yield hit a seven year high at 3.26%. Plenty of folks (Paul included) saw this as an early warning sign that inflation was about to soar.

“It can be pretty well validated by looking at monetary history that when you inflate the currency, distort interest rates and live beyond your means and spend too much, there has to be an adjustment,” he said on CNBC in October.

“We have the biggest bubble in the history of mankind.”

And though the “collapse” never truly arrived like he predicted, the market did end up getting crunched, mostly due to a new round of tariffs and rate manipulation by the Fed. With equities sinking, bonds suddenly became attractive and yields started dropping, eventually inverting.

Meaning that if Paul was right, the market’s late 2018 correction may have saved us from a major inflation scare. Possibly even a recession.

This time, however, he believes a burst (in the opposite direction) will be unavoidable.

“I don’t think anything even existed coming close to what we’re facing today,” Paul said.

Because if the world economy (specifically Europe’s) starts to recover – something that economies have a tendency to eventually do – bond-laden institutions will be caught with their pants down en masse.

Possibly scorching investors, regardless of asset class, in the long run.