Poor market depth (a sign of low liquidity) was partially to blame. These days, midsize companies can more easily cause major index meltdowns because of it.

It also didn’t help that SNAP is in the same industry as Meta Platforms (NASDAQ: FB), a market-leading stock. The “warning note” from SNAP made FB shareholders wonder whether CEO Mark Zuckerberg would soon issue a note of his own. This caused FB to slide 7.62% in response.

That alone wiped out a significant chunk of the S&P’s total market cap.

However, the main reason stocks were unilaterally shocked by SNAP had to do with the source of the company’s revenue, and how it relates to the US economy.

SNAP, a social media company, derives 99% of its revenue from advertising. That’s the story for most other social media stocks, too.

And, over the last 100 years or so, advertising revenues have tracked the US economy fairly well. 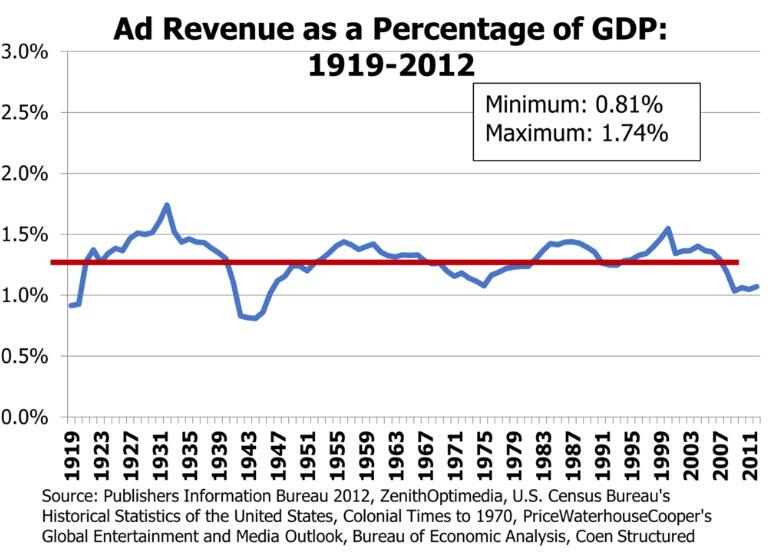 The same could be said for most sources of revenue, but advertising revenues are unique in that nearly every major company advertises. When economic activity slumps across the board, ad revenues typically drop in turn.

“Today we filed an 8-K, sharing that the macro environment has deteriorated further and faster than we anticipated when we issued our quarterly guidance last month,” said SNAP CEO Evan Spiegel in his Monday note.

“As a result, while our revenue continues to grow year-over-year, it is growing more slowly than we expected at this time.”

This sent shockwaves through the market because a slowdown in advertising revenue suggests that a slowdown is taking place elsewhere. We mentioned last week that Target’s (NYSE: TGT) ruinous earnings report served as a “canary in the coalmine” for the economy.

SNAP became another “canary” after releasing its note, confirming investor fears initially stirred up by downward earnings revisions from both Walmart (NYSE: WMT) and Target.

There’s also the possibility that SNAP’s slowed growth had to do with fake users on its platform. Elon Musk’s conquest of Twitter (NASDAQ: TWTR) was put on hold after concerns arose that many of Twitter’s reported active users were actually bots.

Musk wanted to audit Twitter to discern the true number of active users so he could adjust his bid price accordingly. And if auditors discover that Twitter has been intentionally hiding this information from shareholders, a criminal investigation could follow.

SNAP may be in a similar predicament. It might not be, though, and that’s what scares the living daylights out of bulls as the S&P lingers near a bear market threshold (-20% from the all-time high).

So, even though it looked like a wild overreaction, yesterday’s market-wide selloff in response to the SNAP note made perfect sense.

An imminent rally could be rationalized, too, if investors stick with the narrative that a recession would cause the Fed to drop rates. But if a recession hits too quickly, we’ll have a “worst of both worlds” situation on our hands:

A recession coupled with sky-high inflation that refuses to come down.

Ideally, a recession would arrive after the Fed has had a few more months to bring inflation lower. The alternative would just lead to more fear and uncertainty among investors.

Which, unsurprisingly, hasn’t been good for bulls in either the short or long-term.