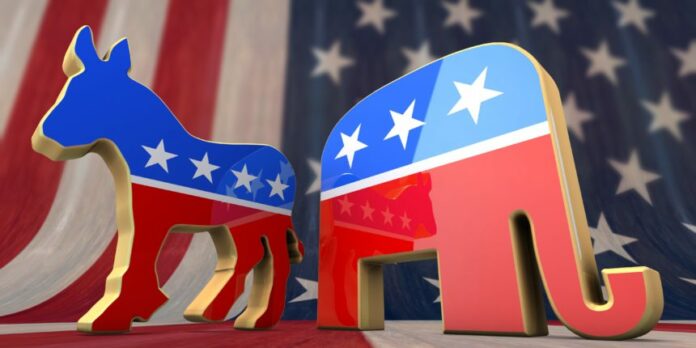 Stocks traded flat this morning as investors awaited the results of the US midterm elections. The Dow, S&P, and Nasdaq Composite opened for moderate gains before falling slightly through noon. Treasury yields advanced again, limiting sentiment. The 10-year Treasury yield popped above 4.20% amid a bond selloff, hitting a level unseen since late October.

Unsurprisingly, yields drove the market, snuffing out the temporary morning rally. Apple (NASDAQ: AAPL) didn’t help matters much, either, as its shares dipped 1% in response to news that iPhone production would be reduced in China due to Covid-19 restrictions.

Rumors that China would soon ease its “Covid-Zero” policy contributed to Friday’s rebound. Now, though, it’s clear that Beijing’s restrictive measures are still in effect and should remain that way for the foreseeable future.

So, instead, bulls are begging for a big Republican showing on election day to prevent another marketwide retracement.

“Going back to 1929 and excluding the Great Depression, some of the best annual returns for the S&P 500 have been seen when the sitting President does not have full control over both sides of Congress,” said Verdence Capital Advisors CIO Megan Horneman.

“This may be because markets do not expect major changes to law with a split Congress.”

“The market is hopeful that some kind of Republican sweep of Congress will lead to either a sort of stalemate in Washington, which they read as good, or at least no new spending, which would be good for rates and Treasury supply,” Conger explained.

A short-term slump in Treasury yields would do wonders for bonds, and by association, stocks.

But an election day bond rally might not be enough to reverse the current Treasury downtrend. In the daily candlestick chart above, you can see that the iShares 20+Year Treasury Bond ETF (NYSE: TLT) closed below support (blue line) on Friday after spending last week above the 10-day moving average, which it crossed above in late October.

The TLT failed to sustain its rally (yellow trendline), though, and now faces a significant bearish continuation. As Treasurys fall, yields rise. There’s reason to believe TLT will test support at the October low, driving long-term yields up in the process.

A 4.20% 10-year yield might seem low by the end of the month unless a Republican sweep can spur on a major Treasury recovery. TLT would need to rise above the 10-day moving average to signal any serious reversal.

And, sadly, election day alone probably won’t provide a catalyst of that magnitude.

But what might do it is the October Consumer Price Index (CPI) release, coming up this Thursday. A cool inflation print will be required if the market has any hope of rallying into December.

″[In] order for the equity and bond markets to match the post-peak inflation performance noted in the table, inflation needs to keep coming down — and at a faster pace than we’ve yet seen. Until the Fed signals the ‘pivot’ is near, things could remain challenging,” wrote Baird’s Ross Mayfield.

He’s right; the bear market won’t end until the Fed pivots. Better-than-expected inflation data would help massively in that regard, and much more than a favorable election day result, even if Republicans do manage a clean sweep victory.