Value shares fell today as the rest of the market traded flat in response to mixed bank earnings. The Dow tumbled over 350 points while the S&P and Nasdaq Composite remained mostly unchanged through noon.

Shortly after the market opened, stocks rallied on news that the European Central Bank (ECB) could scale back its rate hikes this year.

The ECB is “starting to consider a slower pace of interest-rate hikes than President Christine Lagarde indicated in December” according to a Bloomberg report this morning.

Bloomberg explained that although a 50 basis point hike is likely at the bank’s February meeting, “the prospect of a smaller 25-point increase at the following meeting in March is gaining support, the officials said.”

This was a big surprise to markets, as most analysts assumed the ECB would follow an aggressive hiking schedule well into 2023.

Bloomberg’s sources on the matter also added that “any slowdown in monetary tightening shouldn’t be viewed as the ECB going soft on its mandate” and “no decisions have been taken, and that policymakers may still deliver the half-point move for the March meeting that Lagarde penciled in on Dec. 15.”

Regardless, stocks reacted well to the news before retracing sharply. The Dow underperformed the S&P and Nasdaq Composite due to a massive Goldman Sachs (NYSE: GS) earnings “miss.” It was the worst quarter for the company (vs. the consensus estimate) in a decade. Worse yet was Goldman’s forward guidance, which mentioned “early signs of consumer credit deterioration.”

CFO Denis Coleman added that a slowing economy would put more borrowers at risk of missing payments, echoing concerns voiced by other major banks on Friday. GS shares plummeted almost 7%, accounting for roughly half of the Dow’s losses on the day.

Morgan Stanley (NYSE: MS), on the other hand, saw its shares jump 6% higher on the heels of a major “beat.” Record-setting wealth management revenue drove the bank’s better-than-expected earnings.

And though earnings were inconsistent among banks last quarter, a clear narrative has formed for this year over the last two sessions:

Consumer credit is going to be a key focus moving forward, especially after Americans loaded up their credit card balances in 2022 to cope with rising inflation.

That’s casting a pall on markets after stocks enjoyed a strong rally last week, and it could potentially push stocks lower once again heading into February.

“The rally this year has been led by low quality and heavily shorted stocks. However, it’s also witnessed a strong move in cyclical stocks relative to defensive ones. This move in particular is convincing investors they are missing something and must re-position,” said Morgan Stanley analyst and uber-bear Mike Wilson.

“Truth be told, it has been a powerful shift, but we also recognize bear markets have a way of fooling everyone before they’re done. We’re not biting on this particular head fake/bear market rally because our work and process is so convincingly bearish, and we trust it.”

As I’ve mentioned many times before, Wilson was Wall Street’s most accurate strategist last year alongside Bank of America’s Michael Hartnett. Both analysts saw a bad year on the horizon in late 2021 while the rest of Wall Street predicted another bullish 12-month period. Wall Street was proven wrong.

Wilson and Hartnett were right.

Both analysts are predicting an imminent bearish continuation, and so am I. The S&P (as represented by the SPY) came into contact with its long-term bearish trendline this week, which the index has been unable to conquer several times.

The S&P could potentially push higher above the line, but unless it closes out this week above the trendline, there won’t be a breakout. Options traders seemed to realize this, too, as evidenced by a recent SpotGamma note identifying a giant shift toward SPY put options. 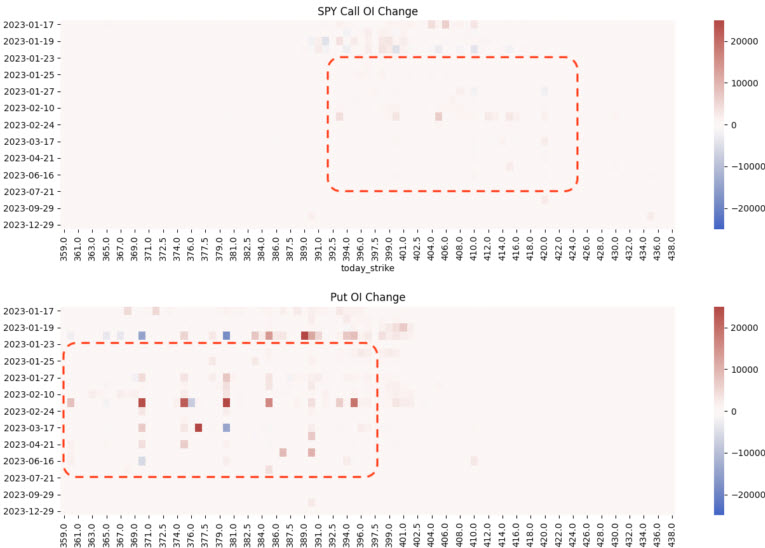 The chart above measured the change in open interest for SPY options from last Thursday to last Friday. Call options barely budged while plenty of new put options were added, suggesting that traders anticipate a correction as well.

A failure to stage a bullish breakout this week could easily result in the SPY being pulled viciously lower. Especially as another important options expiration approaches this Friday, threatening to wipe out a significant number of calls.

We still have two days to go, but anyone who bought the recent dip may want to be cautious. Because, if the SPY does stall here, the collapse that follows could be too swift to avoid without giving up most (or all) of last week’s gains in the ensuing scramble to sell.