And both Yellen and Powell indicated that the post-pandemic recovery was going well. That had bulls a little nervous about the short-term future in regards to what would happen with the Fed’s bond-buying programs.

Then, today, Powell provided a major dose of “taper tantrum” when he made the following remarks on NPR’s “Morning Edition.”

“As we make substantial further progress toward our goals, we’ll gradually roll back the amount of Treasurys and mortgage-backed securities we’ve bought,” he said.

“We will very gradually over time and with great transparency when the economy has all but fully recovered, we will be pulling back the support that we provided during emergency times.”

Nowhere did Powell say that this would happen soon, or even next year. Earlier in the month, following the March FOMC meeting, he said that the mass-liquidity would continue. Moreover, he explained that Fed wasn’t planning on raising the federal funds rate until at least 2023.

But that didn’t stop investors from going into panic mode following his comments on NPR this morning. It could be Powell paving the way for higher yields, so as to prevent economic overheating and out-of-control inflation.

Or, he may have simply been speaking about what will happen once the U.S. has “fully recovered,” whenever that point is reached.

And if yields go higher, tech stocks should continue falling. They’re already down considerably over the last few days, but the selling could always get worse as the paranoia builds.

Even if the plunge isn’t uniform in nature.

“The weakness in technology stocks is undeniable, but it likely won’t be a straight line down for the sector and there will be zigs and zags along the way,” said Bahnsen Group CIO David Bahnsen.

“Tech stock valuations are too high and are screaming for a correction.”

The general market’s looking weak, too, now that it has surpassed a key technical indicator. 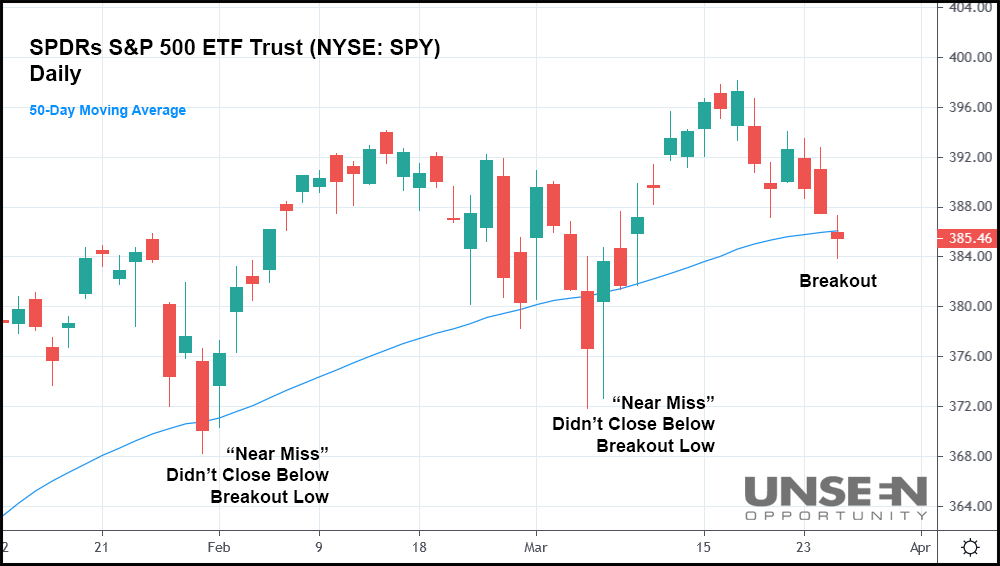 And the last two times the index dipped below the 50-SMA, it ended up recovering in the days that followed.

Today, the S&P did it again. It broke out beneath the 50-SMA and now threatens a larger correction.

But it won’t come unless the breakout day’s (today’s) low is surpassed. Back in late January and early March, that didn’t happen.

A fierce sell-off was avoided on both occasions because of it.

But today, with taper fears simmering beneath the market’s surface, another plunge tomorrow certainly seems possible.

And after that, a strong bearish sentiment shift.

It hasn’t happened yet, of course, but be wary of “buying the dip” if today’s low is taken out. Back in March 2020, Warren Buffett famously told investors that the market’s initial slump was a great buying opportunity.

That’s not to say that another sell-off of that magnitude is on the way. But, given how fragile stocks currently are, a correction close to that size isn’t out of the question, either. If Powell clarifies his remarks and says that the “liquidity train” will keep on rolling, expect a rally through the end of the week.

But if he doesn’t, there could be more carnage en route.

All while Covid cases see an uptick in over 21 U.S. states.