The market’s up this morning as inflation slows. Banks and reopening-sensitive stocks spiked the Dow, which is currently leading among the major indexes. The S&P and Nasdaq Composite are also rising, albeit to a lesser degree.

The reason for this morning’s financials surge is the Fed’s decision to allow bank stock buybacks to resume at the end of June. In addition, banks will be able to raise dividends at that time.

These pandemic-era restrictions were a temporary measure. Now, with an end to the regulations in sight, bulls are piling back into banks. “Reopening stocks” are climbing, too, despite an uptick in Covid cases.

As a result, cruise lines and airlines are among the biggest gainers on the day.

Adding to the bullish enthusiasm is a tame inflation print, as reported by the U.S. Department of Commerce. Personal incomes dropped 7.1% month-over-month. Spending, meanwhile, dipped 1.0%.

Each data point missed analyst estimates of 7.0% and 0.6%, respectively.

But January’s data was revised higher. Personal incomes are believed to have increased by 3.4%, beating the prior estimate of 2.4% handily.

The biggest news, however, was the core personal consumption expenditures reading, which rose just 0.1% month-over-month as expected, indicating subdued inflation.

And if that wasn’t enough, the University of Michigan sentiment survey accelerated to its most positive mark since March 2020, hitting 93 – a post-pandemic high.

On the other hand, the longer-term inflation outlook hit a new high, too. 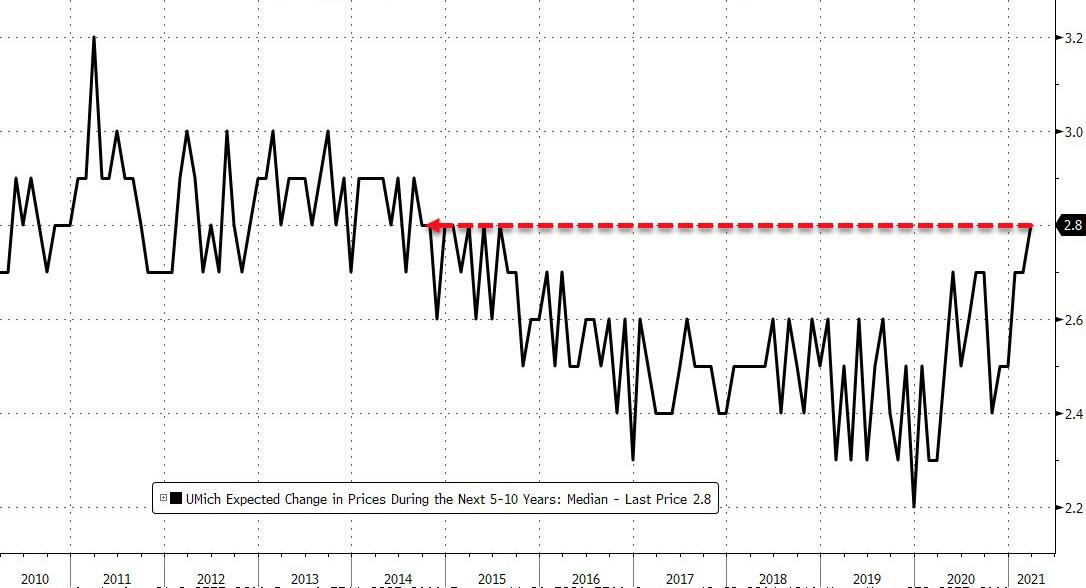 Not since 2015 have consumers been this concerned about inflation impacting prices. With so much stimulus already deployed, and much more likely to come, their fears are well-founded.

But that hasn’t stopped professional investors from staying bullish on value stocks, which many analysts believe will have a great year.

“If you’re positioned the way we are, which is for a cyclical recovery and being overweight the value sectors, certainly you can’t run a victory lap here,” said Jason Trennert, CEO of Strategas Research Partners.

“But it is nice to see, after the last six days, that some of the trends that have been in place for the better part of six months seem to be reasserting themselves.”

The problem is that nearly every trend seems to be “reasserting” itself. Tech was getting smashed as yields screamed higher.

Then, yesterday, tech was up again while yields fell. Today, yields are up big and tech is still enjoying a small gain.

It’s likely a short-term “blip,” but if yields freeze, the market could see yet another tech-dominated rally.

So, as has been the case for the last week and a half, investors are showing major indecisiveness. And you can’t really blame them for that.

Rising Covid cases, taper tantrums, and inflation fears are all influencing stock prices. They’re currently pulling the markets in both directions, further escalating the sentiment “tug of war” with each passing day.

Whoever loses – bulls or bears – will fall flat on their face when the whole thing ends. The market’s prone to big swings, these days. A major rally could completely knock out sellers.

A correction could just as easily see buyers scattered to the wind in quick succession.

We mentioned yesterday that the market’s in “no man’s land.” Today, that’s still very much the case.

And until it isn’t, trading will be very difficult, even if yields play nice and remain near their current levels.