Much of the market’s inactivity this morning is due to a lack of significant headlines. Over the last year, equities have been almost entirely driven by news.

There’s little left to be excited (or even worried) about these days that investors don’t already know.

What did come as a bit of a surprise today, however, was the latest weekly jobless claims data from the Labor Department. For the week ending December 26th, first-time unemployment filers totaled 787,000. That’s well below the Dow Jones estimate of 828,000, and a potential good omen heading into 2021.

It also echoes jobs data gathered by Goldman Sachs, which could be indicative of a positive trend forming in American labor. 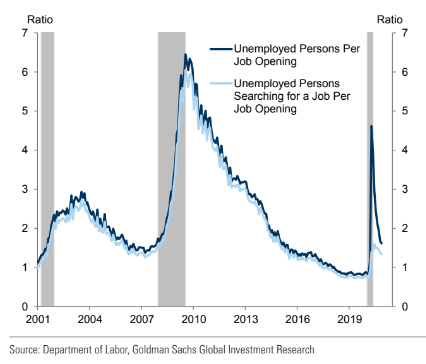 Job openings per unemployed worker are significantly higher right now than they were during the post-2008 Financial Crisis recovery. In the chart above, the labor market appears unexpectedly strong in this regard. The unemployed persons per job opening ratio is below its 2009-2015 levels in spite of a semi-locked-down U.S. economy.

And while it’s true that as many as 20 million Americans remain unemployed, it’s equally true that the job openings are there.

So, why are so many people still out of work?

It’s because the jobs currently available don’t line-up with the folks that are unemployed. 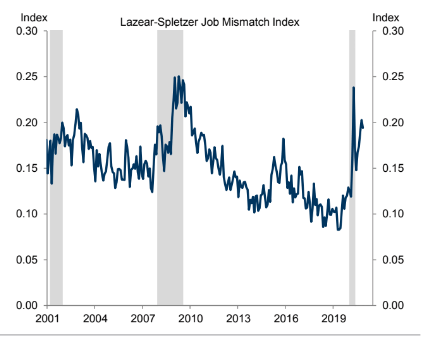 The Lazear-Spletzer Job Mismatch Index, created by Edward Lazear (Stanford) and James Spletzer (Census Bureau), attempts to measure how ill-fitted the labor market is via either a mismatch of skills or undesirable job openings.

At present, the index is above where it was following the 2008 Financial Crisis. More importantly, it’s been rising after initially spiking in response to Covid-19.

So, while the raw jobs data may initially seem encouraging in terms of openings and first-time unemployment fillings, the reality of the situation is far more grim:

Jobs are available, but unemployed workers aren’t taking them due to skill mismatches. Or, simply because they don’t want to.

According to the Lazear-Spletzer model, that pattern has only gotten worse over the last few months. December saw a slight decline, but overall, the index is still hovering around 0.20.

That’s why, despite month-after-month of better-than-expected unemployment data, the U.S. economic recovery hasn’t accelerated like many would’ve hoped. 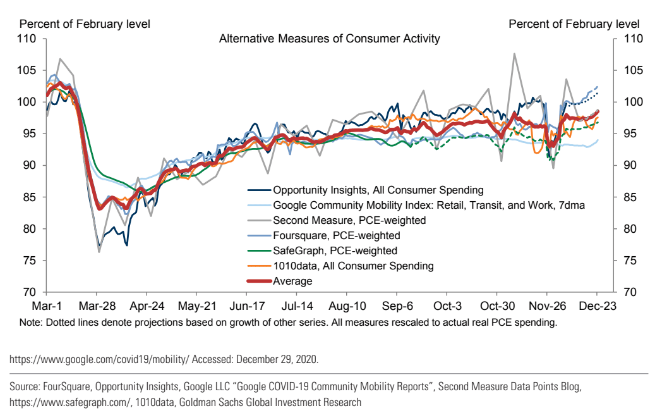 That’s also reflected in consumer activity, which in many ways resembles the stock market’s behavior since crashing in March. The only difference, though, is that average consumer activity remains below its pre-Covid highs.

Meanwhile, equities have soared above their February valuations.

Nearly every major economic indicator has lagged the market. It’s been long observed that stocks are a forward looking mechanism.

But, as I’ve said many times now, they may be presently looking a little too far forward. A long-term bull market seems like its intact, that doesn’t mean, however, that 2021 will be a turbulence-free endeavor.

Conflicting charts, like the ones produced by Goldman, suggest that a disconnect has formed between expectations and what’s actually happening with the economy.

Because of this, bulls could be in for a rude awakening when Q4 earnings are revealed in a few weeks. Vaccines are being deployed en masse in the West, now, but the investing playbook stays the same:

Pick your spots, stay long, but be ready to hit “eject” at the first big sign of trouble. Wall Street remembers the Covid-19 crash. So too do retail traders.

Both groups won’t waste any time in cashing-in on their vaccine rally profits when stocks take a turn for the worse.

Which means that everyone in between – even buy and hold investors – need to stay nimble as well.