Stocks are finally selling-off this morning to end a month’s-worth of major gains. The Dow, S&P, and Nasdaq Composite have all fallen as of noon. Overachieving Dow stocks, especially those in the energy and consumer discretionary sectors, saw the worst of it.

If Trump decides to move forward with his plan, American investors wouldn’t be able to invest in these companies as easily. It could also set up a showdown between China and Joe Biden, assuming Trump’s legal team can’t overturn the election results.

The index is currently down 1.4% on the day. But it’s an easy loss to swallow after such an impressive run. The “vaccine rally” boosted plenty of blue chips in November, too, like Boeing (NYSE: BA) and American Express (NYSE: AXP), which soared 47.6% and 31.6%, respectively, over the last four weeks.

During that strech, the tech giants (notably FAANG stocks) refused to budge.

“This rally has been notable as the rotation from Growth to Value has continued to gain momentum despite the negative news flow of Covid cases surging around the country and lockdowns again being imposed in various parts of the nation,” explained Chris Zaccarelli, chief investment officer at Independent Advisor Alliance.

But moving forward, analysts are concerned that a “road bump” (or dip, in this case) could provide some short-term pain for bulls.

“The length and strength of the current rally suggests to us that the market could be vulnerable to some pullback at these levels,” warned John Stoltzfus, chief investment strategist at Oppenheimer Asset Management, in a note.

He continued, however, adding that with an upcoming round of stimulus and the Fed in its corner, the market could continue rising.

“The bull market that has emerged from the lows on March 23rd of this year has shown similarities to its predecessor […] in having a predilection to climb walls of worry aided and abetted by monetary policy and secular trends deeply embedded in technology and globalization,” Stoltzfus wrote. 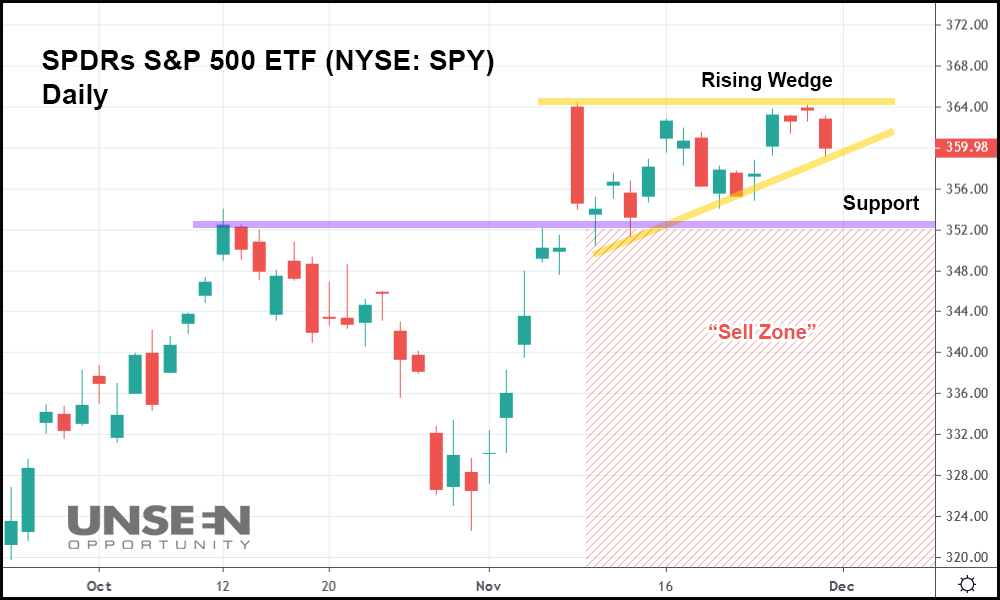 And while that may prove to be true long-term, a look at the S&P 500 (via the SPY) tells a different story for December. The chart above shows that a small rising wedge has formed near key support at the index’s October high.

If the S&P 500 breaks out below that rising wedge, it’ll likely run into support. If it falls below support, a more dramatic sell-off could easily follow, plunging the index toward its October lows before reversing to the upside.

But the scenario I described has appeared repeatedly since March: a rapid plunge, followed by an even more rapid recovery.

Traders may want to keep an eye on the October high as a result, because a major buying opportunity could emerge in the event that support fails. If that happens, it could eventually lead to a whipsaw, snapback rally. Just like we the ones saw in early November and October.

Bulls will ultimately cite stimulus, a dovish Fed, or whatever else seems reasonable to justify the buying frenzy. In the end, though, it won’t really matter to short-term traders.

Especially those that “got in” near the bottom of the dip.