Stocks got crushed this morning after opening lower to start the day. The market then fell further before eventually plunging in response to “taper talk” from Treasury Secretary Janet Yellen. The Dow, S&P, and Nasdaq Composite all sunk with tech suffering the worst losses.

And this all happened while Treasury yields traded flat. The 10-year Treasury rate dropped from 1.607% to 1.585%. That should’ve neither helped nor hindered tech stocks in any significant way.

But Janet Yellen overrode any rate-induced benefit in a statement made during an economic seminar presented by The Atlantic this morning.

“It may be that interest rates will have to rise somewhat to make sure that our economy doesn’t overheat,” Yellen said.

“Even though additional spending is relatively small to the size of the economy, it could cause some very modest increases in interest rates. But these are investments our economy needs to be competitive and productive.”

It’s debatable whether more “investments” (otherwise known as government spending) will be necessary to sustain the US economy. Besides, if the economy is actually overheating (it is), then why does it need aggressive fiscal policy?

Yellen’s remarks kicked off a vicious flash-crash that sent most sectors spiraling. Even precious metals and Bitcoin were unable to escape the carnage. Energy stocks, meanwhile, traded slightly higher as one of the few survivors of the “taper tantrum” while Ethereum hit a new all-time high.

The more pressing question now is if today’s sell-off will materialize into a larger correction. 11 years ago, stocks endured a similar “crunch.” The S&P had just rallied after hitting a post-Financial Crisis bottom. It then peaked in September 2010 before rapidly sinking. 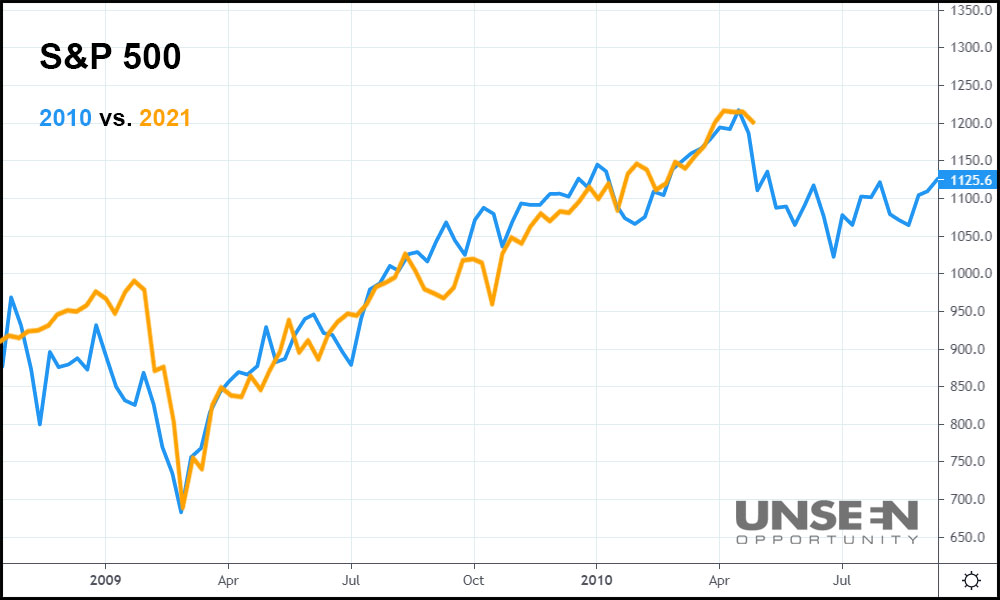 Looking at the chart, the similarities are uncanny. But it goes even deeper than that. A US tax deadline approaches in mid-May. Wall Street banks are measuring net client outflows. Bullishness is hitting levels identified as unsustainable by analysts. Several other market forces, like negative gamma and weak bidding on duration stocks, are lining up, too.

And the market is behaving in a very unusual way – something strategists are starting to point out once again.

“There were 2,800 stocks up on the New York Stock Exchange yesterday, but it was hard to make money. That’s a very unusual pattern. It’s just the difference between these reopen stocks versus the tech stocks.”

“Investors could be getting increasingly disappointed that stocks are not doing well in the face of fantastic earnings news,” the Leuthold Group chief investment strategist said.

And so, moving forward, the market may make another 2010-like move. The S&P would fall, set a higher low, and push higher if it does.

That means the next big dip could be a major buying opportunity for traders. Or, stocks could just as easily scorch lower before ultimately turning around. Then, they’d rise on the next mega-dose of liquidity.

Right around the same time the Fed eventually chickens out on enforcing higher rates.