Stocks climbed moderately higher this morning after a sharp decline in the trading session prior. Treasury Secretary Janet Yellen gave bulls a scare yesterday when she said that interest rates might need to rise in order to cool off the US economy.

“It may be that interest rates will have to rise somewhat to make sure that our economy doesn’t overheat, even though the additional spending is relatively small relative to the size of the economy,” Yellen explained.

The market ill likes “taper talk.” Any mention of tapering bond purchases (thus increasing rates) typically puts equities into a tailspin. And yesterday was no different, at least until Yellen walked back her remarks later that afternoon.

A rise in interest rates “is not something that I am predicting or recommending,” Yellen clarified in a virtual Wall Street Journal conference.

She then moved on to inflation:

“I don’t anticipate that inflation is going to be a problem, but it is something that we’re watching very carefully,” Yellen said.

“I don’t think there is going to be an inflation problem, if there is, the Fed, I am certain, will be counted on to address them.”

The market then pared back much of its initial losses in response. Yellen, scrambling to undo the damage, may have saved stocks from another sell-off today.

But more than anything else, she proved that investors can’t handle the truth. Her initial statement was a surprisingly candid one that bulls really didn’t want to hear.

They far prefer Yellen’s afternoon “fib” by comparison. Banks aren’t buying it, though, and many Wall Street firms have predicted a correction despite assurances from the Treasury Secretary.

“With the S&P 500 around 1% away from record highs, plenty of good news is priced into the market, so stocks look potentially vulnerable to disappointments,” said UBS strategists in a note to clients.

Some sectors look particularly ripe for a plunge, especially those that are encountering key levels of price resistance after months of steady gains. 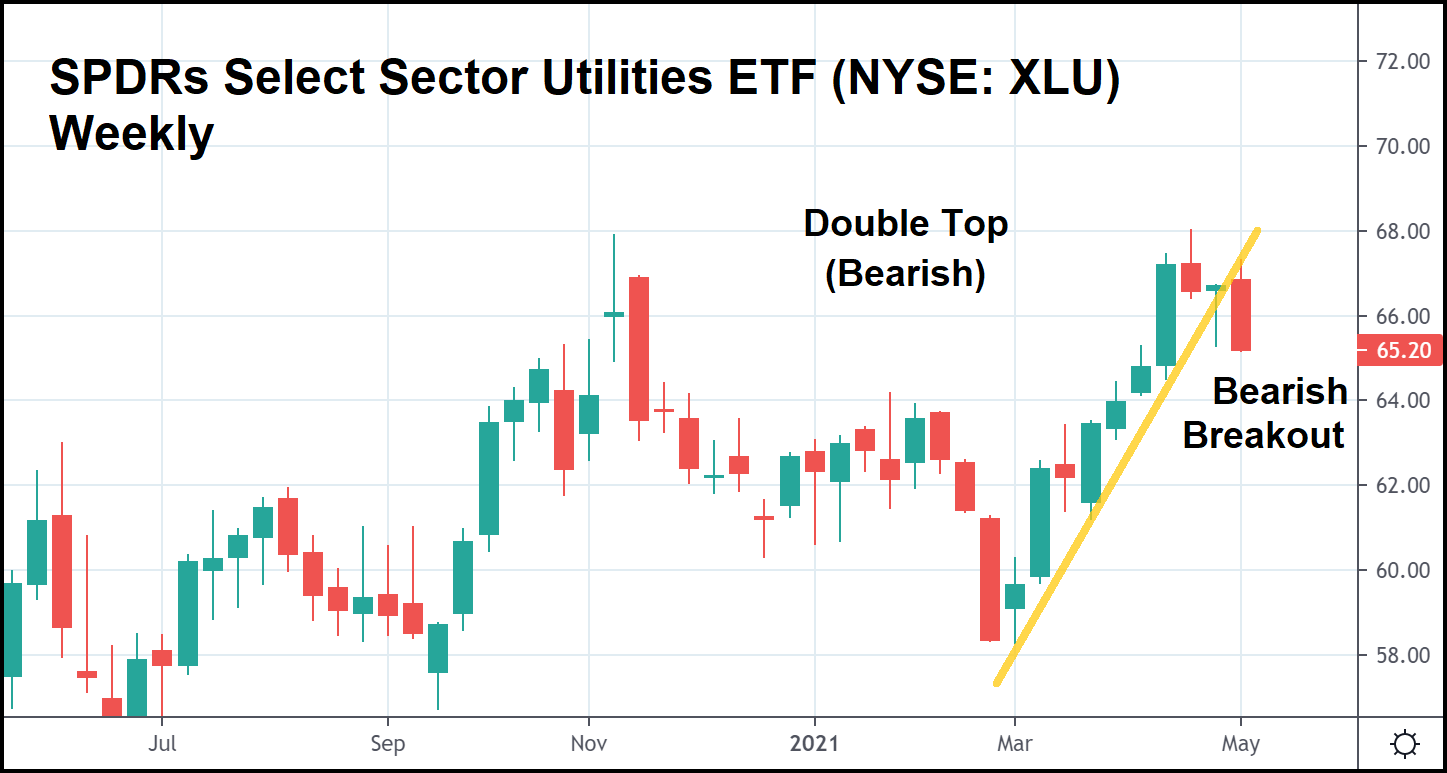 Utilities (as represented by the SPDRs Select Sector Utilities ETF), for example, are experiencing a bearish breakout following a bullish 2-month stretch. The sector just “double topped” a few weeks ago, signaling a potential trend reversal.

This week, a full-on bearish breakout past the minor bullish trend (yellow trendline) has transpired. Traders searching for low-hanging, bearish fruit may want to take a closer look at utility stocks. They aren’t necessarily market-correlated, but utilities certainly got wounded in the recent selling all the same.

Plus, any benefit from Yellen’s latest comments is unlikely to impact the top utility names, as they’re not considered growth stocks (which typically prefer lower rates). That bodes poorly for utilities in the event that other officials continue to play down inflation and rate concerns.

Of course, if the general market sinks, nearly every sector is going to tumble. But utilities seem like the best “play” available for bears at the moment. Sure, tech looks ready to fall again, too, but the sector already endured considerable losses in May.

Utilities, meanwhile, remain just on the cusp of breaking lower.

All while the rest of the market buys into Yellen’s delusionally bullish fantasy.