Futures got off to a rough start before the market opened today thanks to a weak batch of economic data from China, revealed last night. The country’s industrial output and consumer spending levels both hit post-pandemic lows, driven by newly reactivated Covid lockdown measures.

Analysts attempted to account for this in their estimates, but, as Bloomberg reported yesterday, China posted a “huge miss” nonetheless.

This prompted doom and gloom from otherwise optimistic strategists – and rightfully so – as Wall Street banks increasingly joined “team recession.”

“The broad-based recession talk is the major catalyzer this Monday,” said Ipek Ozkardeskaya, a senior analyst at Swissquote, before the opening bell today.

“Activity in US futures hint that Friday’s rebound was certainly nothing more than a dead cat bounce.”

Lloyd Blankfein, Goldman Sachs Group’s senior chairman, went so far as to warn investors that there is a “very, very high risk” of a recession in the US.

“The S&P 500 is quickly approaching a level that, historically, has indicated that future growth concerns are priced in,” wrote Citi’s Scott Chronert in a morning note.

Defiance ETFs CEO Sylvia Jablonski effectively called a pseudo-bottom today as well despite insisting that she was “not calling the bottom” in a CNBC interview. She advised that “there’s some opportunity here to dollar cost average.”

“If you’re sitting on a bunch of cash, you’re locking in losses because of inflation. Investing in equities or asset classes that you believe in […] it is the lesser evil. The selling fatigue will wane, the market will reset. It’s unlikely the Dow and the S&P are going to be in correction territory six months to a year from now.”

“I’m so bearish, and even I’m miserable,” he warned investors in a note two weeks ago. Hartnett’s peers accused him of fear mongering.

Then the S&P dropped another 9%.

Hartnett noted that recessions have always occurred whenever the S&P broke “decisively below” its 100-week moving average. He attached a chart illustrating his point. 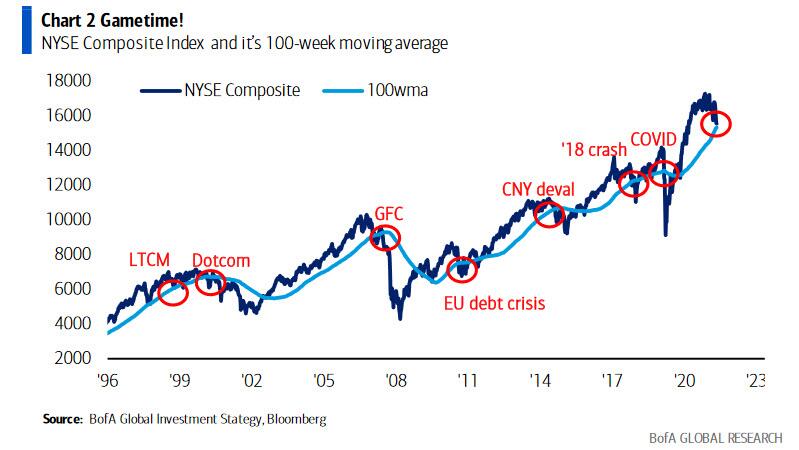 At the time of writing, the S&P had yet to breach the 100-week moving average. As of last Friday, the broader market index closed the week 0.50% below the 100wma.

Does that qualify as “decisively below?” Probably not. But if the S&P suffers another bearish week, Hartnett’s “crisis indicator” will have been triggered.

The B of A strategist, who remains Wall Street’s biggest bear, sees the S&P hitting 3,000 by October. That would require the index to fall another 25% from its current price. Hartnett says it will happen due to an impeding recession made worse by Fed tightening.

We said last week that the market was due for a bounce after several weeks of heavy selling. If Friday’s rally is as good as it gets, bulls are in for some major pain. Retail earnings from Walmart (NYSE: WMT), Target (NYSE: TGT), due out over the next two days, could spoil the party, too, if shareholders don’t like what they hear.

Following the Friday rebound, the stage is now arguably set for a bearish continuation – not a bullish recovery – as investors assess how bad the macroeconomic situation truly is. China’s data release last night suggested that things are only going to get worse, not better, for the global economy, all while central banks in the West seek to aggressively raise rates.