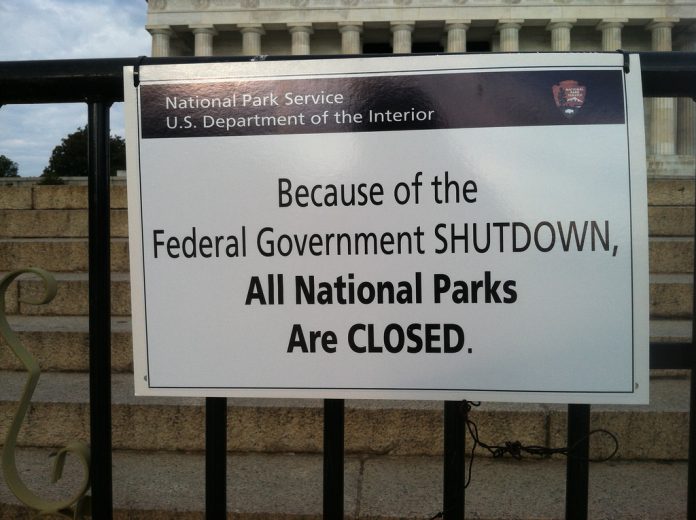 U.S. indexes fell on Tuesday afternoon after a brutal televised shouting match played out between President Trump and soon-to-be Speaker of the House Nancy Pelosi in the Oval Office. The heated debate—if you can call it a debate—focused mainly on the border wall, which Congress has so far refused to designate funds for.

Should Congress and President Trump go through with a government shutdown over border wall funding, it’d be one of almost two dozen which have occurred in modern times. But just how bad are these shutdowns for the markets? We’ll take a look at three of the most well-known government shutdowns and explain why they don’t have as large of an impact on markets as the pundits claim they do.

What Do Past Government Shutdowns Tell Us About Future Market Movements?

Over 20 government shutdowns have occurred since the early 1970s, but the most recent ones can give us a good snapshot of what a “modern” shutdown looks like for the market: Some 800,000 federal employees were furloughed and 1.3 million forced to work without pay for roughly two weeks due to issues over funding the government for fiscal year 2014. The market, meanwhile, may have had an initial response early on, but recovered those gains and then some as the shutdown continued. Bill Clinton and Newt Gingrich went head to head over the 1996 federal budget deficit, where Medicare, education, and environmental issues were causing federal debt concerns. This was the longest shutdown in modern history, and it had very little—if any—influence over U.S. stock prices. George H.W. Bush’s October shutdown lasted only 5 days (and 3 trading days), but it seems to have caused a slide in the S&P, if only because the market was in the process of finding a bottom after a very ugly year. In this case the shutdown clearly had an impact, although it did no lasting damage to the market, which rebounded quickly and went on to hit higher highs.

Three Reasons Why a Shutdown Will Almost Certainly Mean Business as Usual for U.S. Indexes

In general, you shouldn’t let a government shutdown affect your portfolio (at least for the short term), and here’s why:

The longer the shutdown goes on, the greater the chance of a steeper drop. But just for reference, the longest shutdown ever was under Clinton in 95-96, lasting 21 days, and the market went up .1%.

One week of shutdown equals negative .1% to GDP growth. That’s according to a 2014 Congressional Research Service report. If we assume the trend holds and a shutdown lasts a week or even just a few days, the impact is negligible to the economy and to investors.

Government shutdowns haven’t had a truly negative impact on the markets since the Carter administration, and it’s hard to say whether the shutdowns had an effect back then, either, considering just how bad those years were for stocks in general.

For now, it’s steady as she goes until a shutdown is confirmed. If a shutdown does happen, investors should be on the watch for anything lasting longer than 3 weeks. In the past that’s been a good indicator to reassess your risk and prepare for a more entrenched, long-term shutdown. But as history tells us, it’s very unlikely.