Stocks refused to budge this morning as Covid concerns made a comeback. Austria announced earlier today that it would revert to a full nationwide lockdown to fight rising infection numbers. Last night, Germany unveiled new restrictions as well but only for the unvaccinated.

“The news is hitting European markets hard this morning as fears mount that the virus and restrictions will spread across the continent again,” explained Deutsche Bank chief economist Jim Reid, before adding that “the curveball might be the US.”

“So although all the headlines are in Europe at the moment, will the US be more vulnerable than many European countries over the course of the full winter? Recent history suggests the US have a higher bar for economic restrictions related to Covid, but it also has a lower vaccination rate than their European peers.” 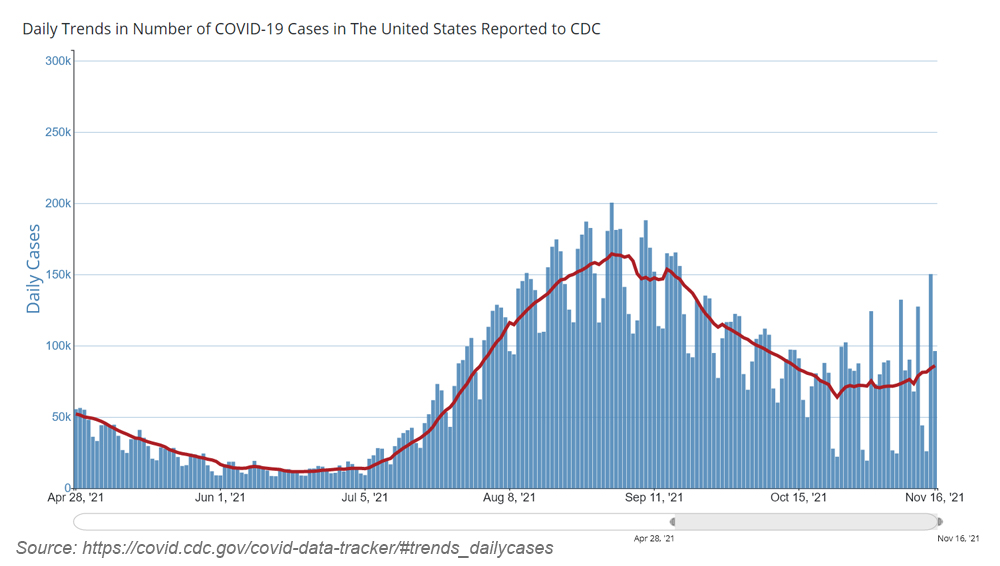 Covid case totals are up in the US, too. However, no states have activated new lockdown measures in response.

But that didn’t stop investors from dumping their reopening-sensitive stocks this morning. Airlines were gouged for significant losses today alongside travel stocks like Airbnb (NASDAQ: ABNB), which fell over 4%. Cruise lines plunged as well.

Thankfully for bulls, the House of Representatives passed President Biden’s “build back better” bill. Although, it should not have surprised anyone given that House Democrats almost unanimously support the bill.

Only one Democrat in the House – Rep. Jared Golden – voted against it. Now, the bill goes to the Senate where more moderate Democrats (Sen. Manchin and Sen. Sinema) are likely to object to its current form.

The Congressional Budget Office (CBO) estimates that Biden’s plan contains $1.636 trillion in spending vs. $1.269 trillion in revenue over the next 10 years. According to the CBO’s estimate, the bill would add $367 billion to the US deficit. The White House insisted in the past that the bill would “pay for itself.”

The CBO found that not to be the case. It also didn’t account for the cost of inflation, which should only mushroom over the next year.

Nonetheless, Treasury Secretary Janet Yellen insisted that the build back better plan will be paid in full in a statement made following the CBO’s scoring of the bill.

“The combination of CBO’s scores over the last week, the Joint Committee on Taxation estimates, and Treasury analysis, make it clear that Build Back Better is fully paid for, and in fact will reduce our nation’s debt over time by generating more than $2 trillion through reforms that ask the wealthiest Americans and large corporations to pay their fair share,” Yellen said.

Yellen claims that the IRS will take in “at least $400 billion in additional revenue” over the next 10 years. That’s just enough to cover the $367 billion deficit.

But will the IRS be able to deliver on that promise?

Maybe, maybe not. It won’t matter for the market in the short-term, however, so long as the bill passes the Senate without getting completely gutted by fiscal conservative Democrats – an outcome that would undoubtedly prod stocks to new heights heading into December.