Coronavirus cases are climbing in the U.S. once more, causing investors to nervously sell at the open this morning.

Bulls recouped those fear-driven losses by midday, though, and kept stocks chopping sideways through the afternoon.

By the end of trading, it seemed like the extended post-crash rally was out of gas. If that’s the case, equities will need help in order to punch higher from here.

“Going forward, at these heightened levels, it’s going to be much more difficult to get another significant leg higher unless forward-looking fundamentals get better,” Megan Horneman, director of portfolio strategy at Verdence Capital Advisors, said.

“The earnings environment needs to meet that euphoria we’ve seen in the run-up after that bear market.”

Worse than expected weekly jobless claims kept a lid on the market, too. 1.508 million Americans filed for unemployment insurance last week according to a report from the U.S. government this morning. Dow-polled economists predicted an increase of only 1.3 million.

To Bleakley Advisory Group chief investment officer Peter Boockvar, it could be a signal that the labor market is plateauing.

“While initial claims have now fallen for the 11th straight week after the late March spike, this past week saw the slowest pace of decline on a percentage basis since early April so we’ll see if this is where it settles out for now,” Boockvar explained.

Wells Fargo senior global market strategist Scott Wren believes the recent selling could be a precursor to a larger break from the rally as the U.S. continues to reopen.

“We believe the market is pricing in quite a bit of good news and the rally is likely to take a breather in coming months as the recovery evolves,” Wren said in a note.

“We expect volatility in the coming months as we gauge how the reopenings are going and how consumer spending is progressing.”

Short-term – within the next week – Wren’s probably correct about the market taking a “breather” as well. And if stocks don’t start rising soon, they could face a rapid sell-off as investors cash out, as early as tomorrow. 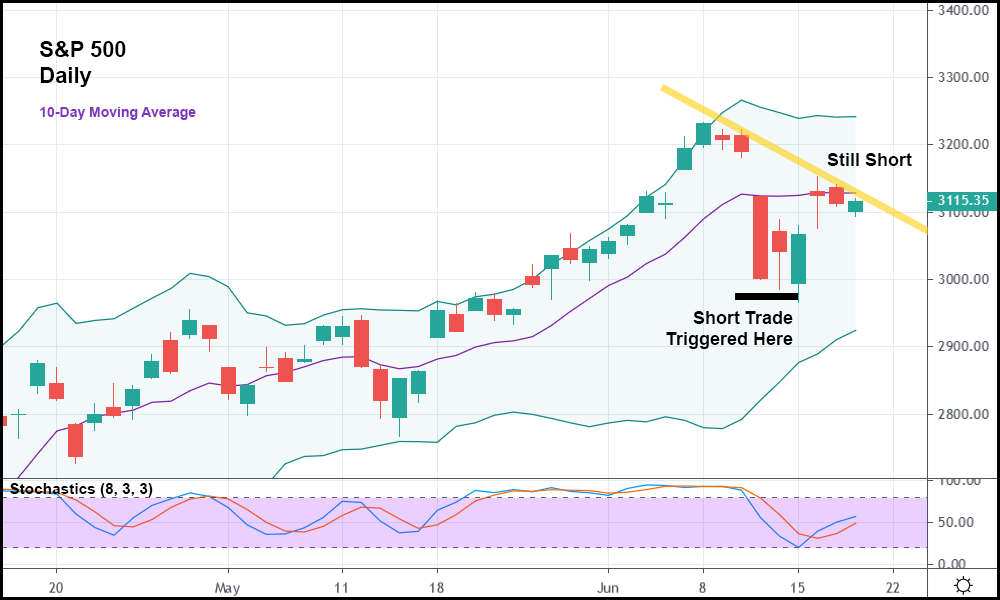 The S&P 500, which we looked at on Tuesday, failed (again) to close above the 10-day moving average. In fact, the index even fell short of its minor bearish trendline (in yellow), which we’d typically use to look for long trade setups.

Per our trading rules, we technically went short on the S&P 500 back on Monday. At this point, that trade’s still valid, if not more so now that the index closed another candlestick below two highly important bullish indicators (the 10-day moving average and bearish trendline).

And until the S&P 500 can leap both of those obstacles, it’s short-term momentum points share prices lower.

So, tempting as it may be to hop back into long, market-correlated trades after a major index just set a higher low, it might be a good idea to wait.

Or, even better, go short, in a market that many well-respected analysts have recently called “a bubble ready to burst.”