The May jobs report is here, and for a second consecutive month, US labor disappointed. Only 559,000 jobs were added last month, falling well short of the 675,000 estimate. It’s a marked improvement over the April 278,000 job add, but still not what economists expected after April’s dismal results, even following an upward revision.

And though a 116,000 payroll miss might seem high, it ended up falling within one standard deviation of the May estimate.

Perhaps the biggest surprise was a decline in the unemployment rate, which fell from 6.1% to 5.8% as 160,00 people left the labor force last month. Many experts believed that the labor force would increase in size as the economy reopened.

Does that sound like something that would happen during an economic recovery? Investors didn’t think so, either, and sent stocks higher at the open. With a weak jobs report in tow, the market has reason to think the Fed won’t taper any time soon.

Fed Chairman Jerome Powell has reiterated time and time again that employment is the Fed’s key indicator for when to tighten monetary policy.

The May jobs report should only keep the “liquidity-fest” going.

Beneath Powell, however, other Fed officials have expressed concern over potential bubbles in several markets. Dallas Fed President Robert Kaplan said in late April that “we’re now observing excesses and imbalances in markets.”

“[We’re] very attentive to that,” Kaplan continued, “and that’s why I do think at the earliest opportunity, I think will be appropriate for us to start talking about adjusting those purchases.”

He then reopened old wounds, suggesting that there are “real excesses in the housing market.”

One week later, Kaplan doubled down, saying “the Fed should start the taper debate sooner rather than later.”

Bulls shrieked in horror. But the taper never happened, even after Powell himself admitted that some assets were looking rather “frothy.”

And so, today’s jobs report reveal should help subdue those hawkish urges, right? Well, maybe not. Consider what the reaction would have been if May payrolls beat expectations.

Would it have been taken as a sign that the labor market had recovered enough to start tapering? 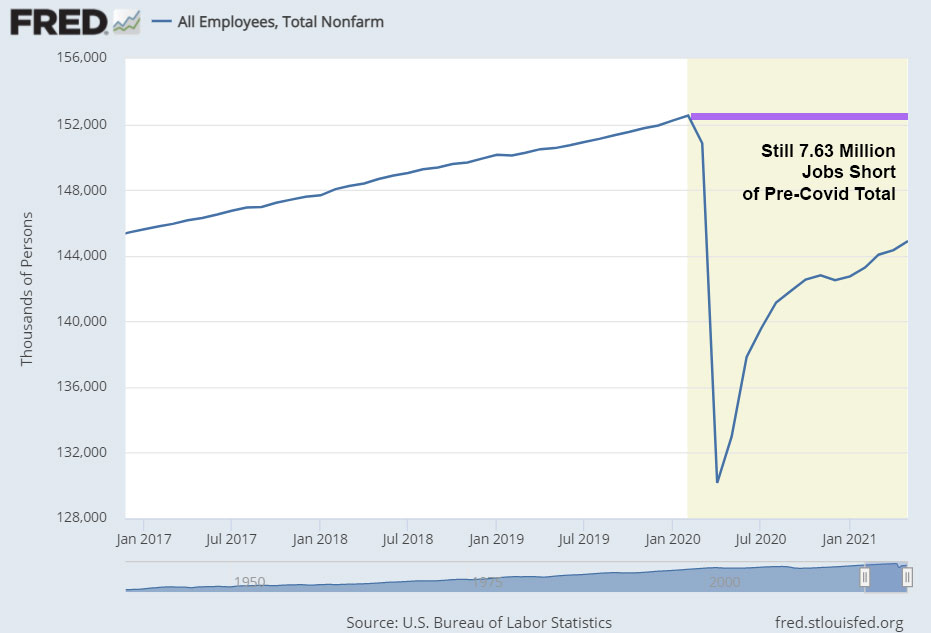 In terms of the bigger picture, absolutely not. The US is still 7.63 million jobs short of where it was pre-Covid. Another 116,000 payrolls would not have tipped the scales in any significant manner.

What’s more, US labor is way off course from its pre-Covid trajectory. The US would likely have over 160 million nonfarm payrolls right now if not for Covid. Instead, only 144.9 million are employed and the labor force is actually shrinking.

Does this seem like a trend that’s going to prompt any tapering by the Fed? Probably not. An inflating housing and equity bubble could do it first. Or an out-of-whack repo market, which has hit critical mass as the Fed tries to find places to stuff unprecedented liquidity.

May’s payroll miss should not be interpreted as a “bad news is good news” type of story. In this case, bad news is simply bad news because a payrolls “beat” would not have had a major impact on monetary policy, either.

So, today’s surge at the open from stocks is probably unwarranted. It’s also adding to the “frothiness” that Powell & Co. commented on last month.

Which, more than anything else, might finally prompt some serious taper discussions before the labor market gets even close to its pre-Covid levels.