It’s been an eventful Tuesday. And not just for investors, either. All of America is reacting to Joe Biden’s newly selected running mate, junior U.S. Senator Kamala Harris (D-CA).

Biden made the announcement roughly twenty minutes after the market closed. Harris may move the needle tomorrow when it opens.

She also might not have any effect at all. VP selections have historically not caused much turbulence in equities, but these days, nearly anything can send stocks spinning.

Or, surging, like they did earlier this morning in response to a new Russian vaccine. Big Tech (and FAANG in particular) got walloped today while the rest of the market jumped higher before noon. A transition seemed to be underway, carrying over from yesterday’s equally unbalanced trading session.

“Markets are looking forward to better days ahead,” said Jeff Buchbinder, equity strategist at LPL Financial, in a note.

“Although the timing is uncertain, the stock market is expressing confidence that the pandemic will end eventually with a vaccine—or multiple vaccines—and with help from better treatments in the interim.”

With the Fed pumping stimulus into the U.S. economy, stocks have gotten pumped up as well. Russian President Vladimir Putin intensified the buying frenzy by announcing that his country gave regulatory approval for the world’s very first Covid-19 vaccine.

“As far as I know, a vaccine against a new coronavirus infection has been registered this morning, for the first time in the world,” he said.

“I know that it works quite effectively, it forms a stable immunity and, I repeat, has passed all the necessary checks.”

Putin even went so far as to say that he gave it to his daughter, who only developed a reactionary fever. Experts, like former FDA Director Scott Gottlieb, however, aren’t convinced that Russia has a successful vaccine. At least not in the way that Putin claims.

“I wouldn’t take it, certainly not outside a clinical trial right now, it appears it has only been tested in several hundreds patients at most,” Gottlieb said in an interview with CNBC.

He continued, adding that while it’s “not a trivial vaccine,” it’s also “not at all clear how efficacious the Russian adenovirus vaccine is going to be.”

Eventually, the market “sobered up” in the afternoon and closed lower. Harris’ VP selection may drive stocks down further tomorrow, possibly hastening the Big Tech collapse.

That means there’s arguably never been a better time for bulls to short one of America’s top stocks, which has undoubtedly been a “coronavirus winner.” 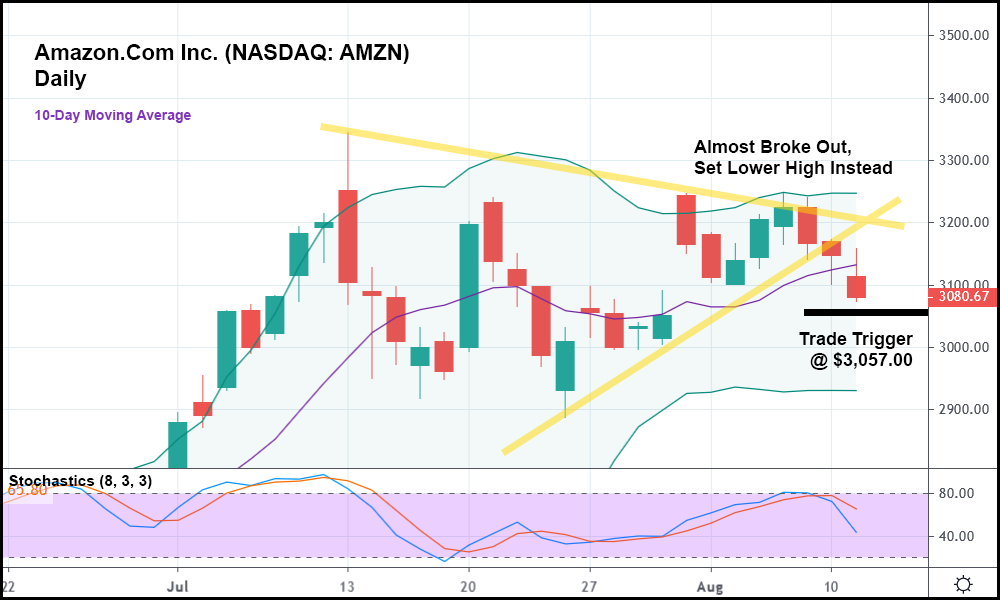 That’s right, Amazon (NASDAQ: AMZN) is finally ready to fall. After barely breaking out of its triangle formation yesterday, the stock dropped again today, this time past the 10-day moving average. AMZN shares have been stuck in a tight range of sideways chop, and even almost broke out to the upside last week.

Now, though, AMZN’s breaking out to the downside. For that reason, it might make sense to take the stock short with a trade trigger of $3,057.00 provided that it trades below today’s low.

And even if the market doesn’t get crunched again tomorrow, tech stocks – AMZN included – could still fall as the rotation into small-caps take place.