Thought the tech rout was in full swing?

“Does the tech outperformance continue? Or does hope around a vaccine, a better-than-expected Q2 earnings season and the hope the strong economic data continues to hold up start to justify the idea that some froth should probably come out of tech?”

They’re fair questions, but bulls don’t seem interested in pondering them this morning. The recent tech sell-off represents a discount on top-flite stocks in the eyes of many investors.

Even though tech is still trading near its all-time highs.

What’s really pumping the market up, though, is another vaccine development.

And no, it has nothing to do with Russia.

President Trump announced last night that the U.S. government will purchase 100 million doses of Moderna’s (NASDAQ: MRNA) coronavirus vaccine candidate. It’s currently in late-stage human trials and has shown promise in prior studies. Now that Trump has placed an order for the experimental vaccine, a sentiment shift is counteracting yesterday’s losses.

“A combination of the S&P 500 Index making its first real attempt at an all-time record high after seven straight days of advances, its old leadership — technology and FAANGs — continuing a recent trend of struggling and another day without an agreement nor even renewed talks in DC regarding a new stimulus package finally caught up with the stock market,” said Jim Paulsen, chief investment strategist at the Leuthold Group, about Tuesday’s tough trading session.

Without unemployment relief, that bearish trend could continue. Congress is still at odds over the new bill despite Trump’s executive orders signed over the weekend.

And according to House Speaker Nancy Pelosi, both sides remain “miles apart” in negotiations. Not even POTUS himself can motivate lawmakers in the current political climate. 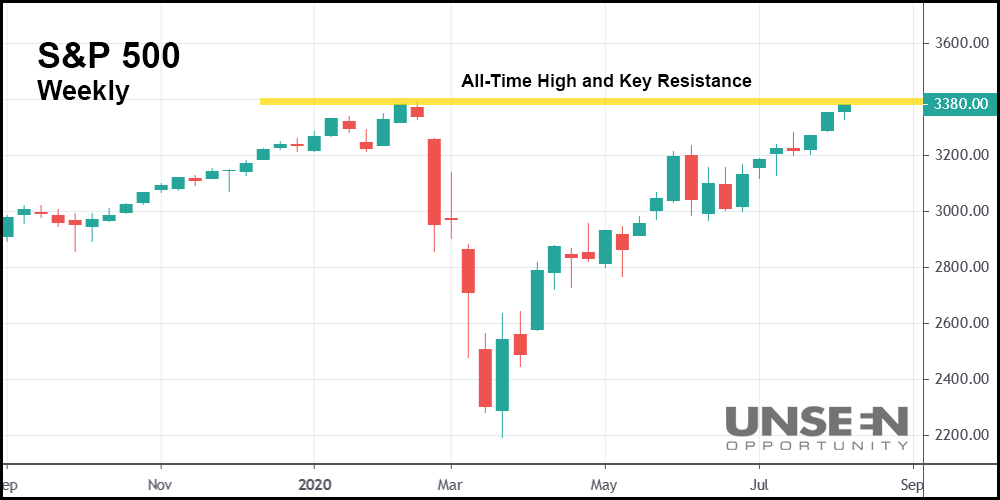 That’s bad news for bulls as the S&P 500 lingers near its all-time high from February of this year. If the index can’t break through resistance at that price level, it would form a dreaded “double top” – a technical candlestick formation that often precedes trend reversals.

A trend reversal, in this case, could result in a moderate-term correction. There have been ups-and-downs since the market bottomed in March, but as you can see in the chart above, the S&P has risen somewhat consistently.

Bulls seem to have forgotten that sell-offs happen, and moreover, that they’re a necessary component of any healthy rally. It’s somewhat surprising to see the recent run-up hasn’t really had one.

Sure, stocks got a little choppy in June, but it was a small “hiccup” in the grand scheme of things. Even the Nasdaq Composite, which was beginning to tumble, shows a similar “all profits, no losses” trend in terms of weekly candlesticks (like in the chart above).

Simply put, the current pace is unsustainable. The market could absolutely go higher, but nearly every technical indicator suggests stocks are overbought. If the S&P 500 bounces off its all-time high, it would add yet another bearish pressure pushing down on equities.

That means, at present, the best strategy likely involves staying long (but also cautious) and waiting for a “sell sign” to appear.

Regardless of whether Congress can get a deal done or not.