Stocks are slightly down this morning as Congress squabbles over coronavirus relief packages. A slew of poor quarterly earnings are keeping the bulls at bay, too.

What did have investors feeling encouraged, however, was the Republican unemployment package (should it pass). Under the proposed plan, workers would be entitled to 70% of their previous wages, replacing the prior $600 per week stipend that ran out on July 25th. Individuals would also receive a direct payment of $1,200.

Democrats oppose the relief bill in its current form, which should ultimately lead to a delay in legislation.

“The cutting of the unemployment benefits is setting us up for a political battle and that could take time,” Peter Cardillo, chief market economist at Spartan Capital Securities, said.

But most important of all is a proposed extension of the Paycheck Protection Program (PPP) for small businesses. With almost every American company “at the trough” – even those that don’t need the loans – an expanded PPP will undoubtedly keep the market calm.

Some businesses have returned the money they didn’t need, of course. But overall, they’re the exception. The PPP will continue to indiscriminately pump the economy full of cash until productivity improves.

And if the results aren’t good, or even just mediocre, the Fed may take additional action.

Gold has surged in response to the unprecedented stimulus – and general lack of faith in the central banks – as a result over the last month.

But what has yet to truly erupt is Bitcoin, often called “digital gold” for its status as a store of value. Bitcoin surged yesterday for an 11% gain, breaching a point of key resistance. Crypto’s top coin is now eyeing what could be a bigger short-term move higher, possibly catching up to (or even surpassing) gold in terms of gains. 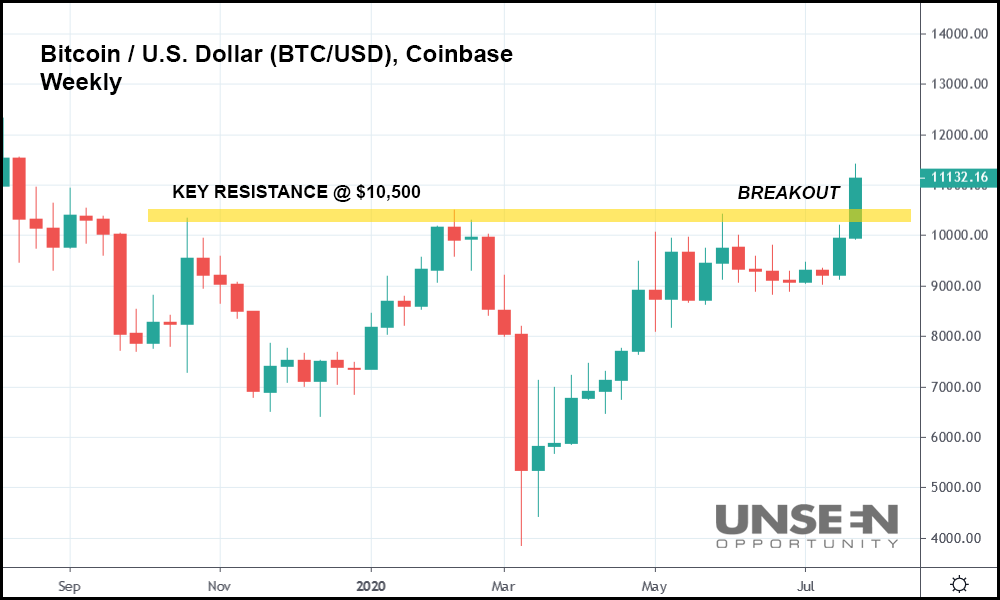 The breakout may have occurred just yesterday, but it’s part of a broader move that’s been developing for months. Much like equities and precious metals, Bitcoin got scorched in the Covid-19 crash.

Since then, though, it’s more or less tracked the stock market. The disconnect finally happened this week when Bitcoin exploded past $10,500 – key resistance that it failed to breach twice before.

Today, however, Bitcoin is trading north of that price level, converting it into a level of support. For traders looking to buy Bitcoin for the first time, or to simply re-enter the market after the post-2017 hangover, this might be their best shot. The macroeconomic events surrounding crypto support a move higher.

The Bitcoin halving, which occurred on May 11th, supports a move higher. Bitcoin has historically risen in the months following past halvings.

And the continued devaluing of the dollar by way of a potential “capital war” with China supports a move higher, too.

Fundamental analysts now have a heap of evidence that suggests Bitcoin will rise. As of yesterday, technical analysts got their breakout past key resistance, providing ample reason to buy as well.

Does that mean Bitcoin will set a record high any time soon? Probably not, but a short-term rally seems likely.