An invincible market and a bull run continuation. It’s what Wall Street banks – and plenty of retail traders – are counting on. With stimulus and mass liquidity still on the table, odds are they’ll get what they desire.

But will an additional leg up make sense, in the grand scheme of things? Probably not.

That doesn’t mean there’s a total lack of positive data, though. Investors have plenty to feel encouraged about these days, provided they look in the right places. Goldman Sachs’ (NYSE: GS) Q4 earnings blowout from two days ago, for example, initially left traders feeling giddy. Other banks seemed likely to follow suit.

And Goldman’s quarterly results may be only the first from a long list of corporate triumphs. Investors will soon discover just how strongly American businesses closed out 2020 in the coming weeks.

If the quarters prior are any indication, bulls should be pleasantly surprised despite an uptick in new Covid-19 cases. Stocks will certainly continue their ascent if Q4 turned out to be another good showing.

In fact, investors may even be willing to overlook:

The U.S. accusing China of genocide, China’s sanctioning of key ex-Trump officials, the Chinese embassy’s Twitter account being locked, a microchip shortage, a Chinese military shift to “overseas adventurism,” a sudden 180 of Trump’s policies by the Biden administration, vaccine shortages, lockdowns in Germany until February 14th, and the total shutdown of the French restaurant industry until April 6th.

Oh, and let’s not forget the “uncivil war,” as President Biden calls it, still raging in the U.S.

Surely, none of these events could torpedo the market, right? Well, maybe not individually.

But collectively, an “uncertainty bomb” is loudly ticking. Stocks opened for a loss this morning in response to the new European restrictions. Without cafes to frequent until the spring, the French won’t be able to enjoy coffee and baguettes in public. To other Westerners, that may seem insignificant. To Parisians, however, it’s a major part of their culture.

That erosion of personal liberty could snowball in Europe, regardless of whether Covid-19 infections continue to dwindle or not. At present, the 7-day global new case average is down. So too are U.S. hospitalizations, which peaked in early January. 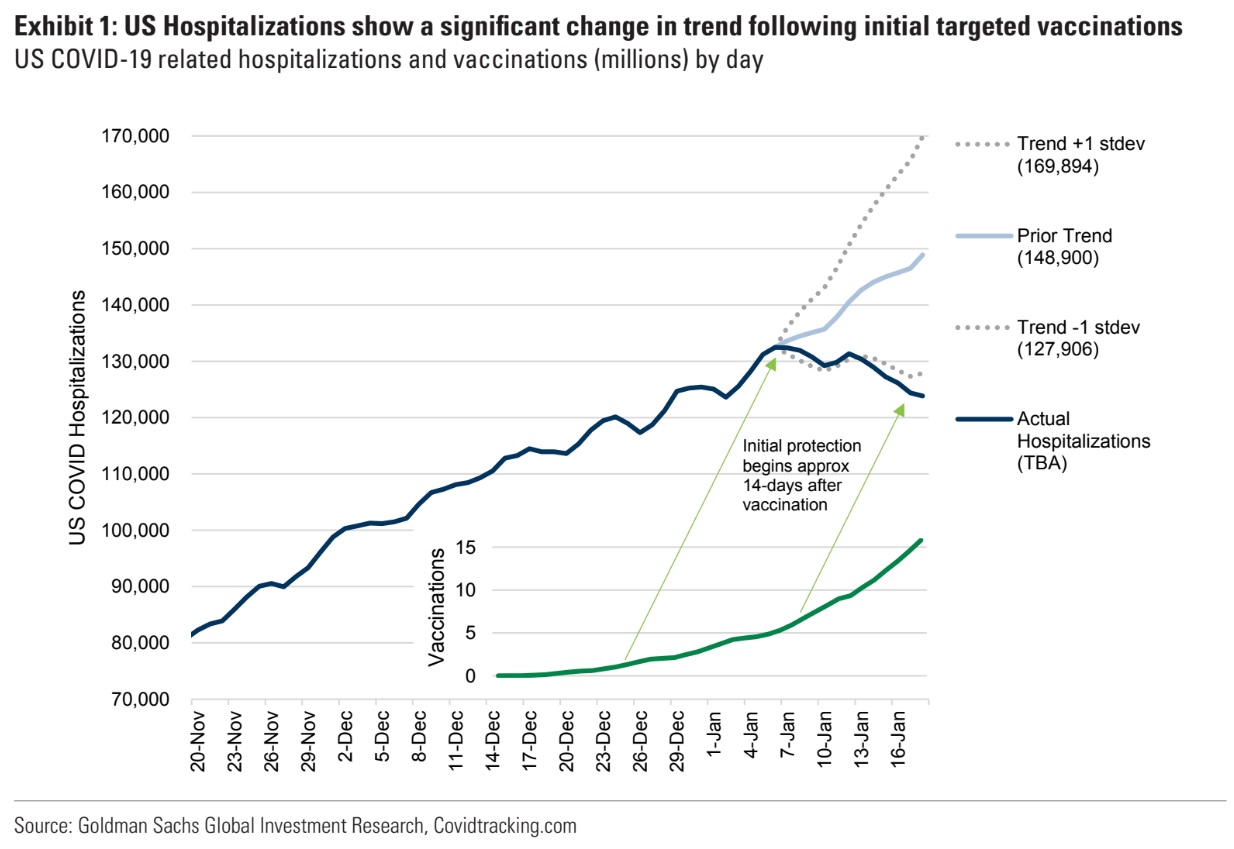 Yesterday, the WHO even admitted that many Covid tests could be false positives. Moving forward, confirmed infections could require a 2nd test along with a clinical diagnosis. That alone should shrink the number of new cases significantly.

Throw in a working Covid vaccine, plus a European Central Bank (ECB) that’s now engaging in yield curve control (without officially saying so), and you’ve got the makings of a rally re-boot.

So, as usual, predicting the next market meltdown is nearly impossible. With central banks, the WHO, and Western governments ensuring a bullish investment environment, there’s no sense in getting in the market’s way. Not with so many powerful forces behind it.

Volatility should accompany another boost higher, too. Overall, though, equities seem to ready to skew positive through Q1 via the continued “pumping up” of the market.

Which, one day, will come crashing down.

But only when the Fed (or the ECB) allows it to.