Stocks sunk at the open this morning before gaining back most of their losses around noon. It’s been yet another indecisive trading session, complete with rising Treasury yields.

The 10-year Treasury yield hit a new 14-month high (1.77%) today after dipping over the last week and a half. In doing so, it reapplied pressure to high-flying tech stocks that have struggled as of late.

However, the tech-heavy Nasdaq Composite is only trading for a small loss. So too are the Dow and S&P. And unless yields surge to finish out the week, a major growth sell-off seems unlikely.

Meanwhile, reopening-focused stocks continue to steal the spotlight. Cruise lines and airlines are overachieving again despite rising Covid totals in a number of U.S. states. Banks are up as well following yesterday’s mega-margin call from Archegos.

The only exceptions are Nomura (NYSE: NMR) and Credit Suisse (NYSE: CS), which provided significant leverage to the investment firm. Both banks are down again today.

In other words, it’s been a frustrating day for trend-seeking traders. The S&P is still below resistance at its all-time high from last week. The Nasdaq Composite is caught in a tight, choppy range. The Dow touched a new all-time high yesterday but didn’t truly break out.

That hasn’t stopped analysts from almost unilaterally remaining bullish, though, with the Fed providing ample liquidity.

“The significant tailwinds propelling equities higher and the forces that have driven equities into, during, and now out of the pandemic remain,” said analysts at Evercore ISI in a note to clients.

That enthusiasm is reflected in the March Consumer Confidence reading, which clocked-in at 109.7. It’s the highest measurement seen by the index since March 2020, before the pandemic truly took hold. 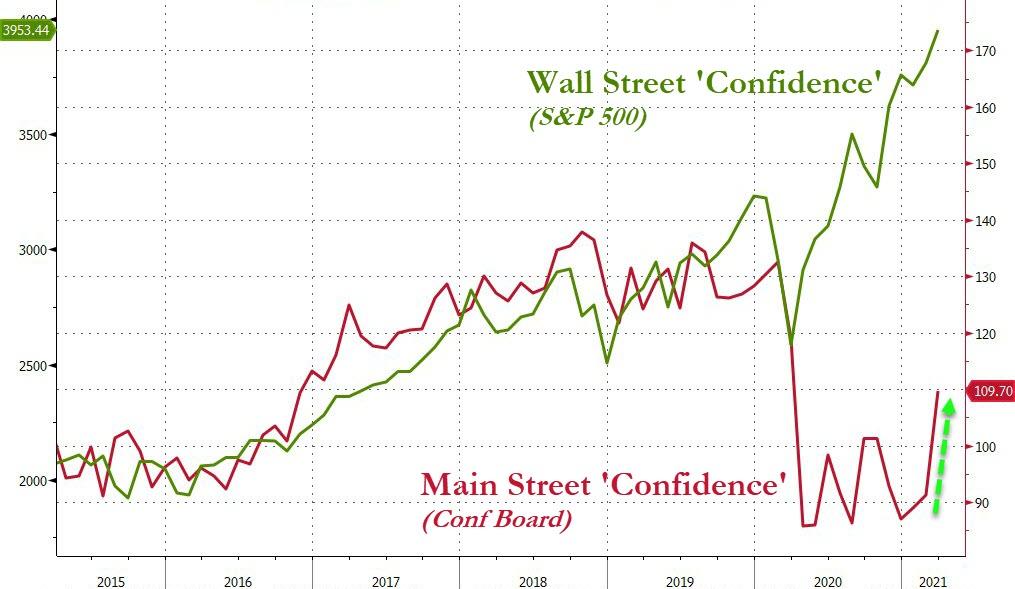 And though March’s number is a marked improvement since last month, it’s still well below the index’s pre-Covid levels.

Wall Street’s confidence (as indicated by the S&P 500) is measuring far higher than Main Street’s, where some would say the market really should be trading at.

The gap between the two has been filled by an endless torrent of stimulus from the government and bond-buying from the Fed. As Evercore ISI noted, subdued rates and aggressive fiscal policy – two artificial market boons – have provided stocks with ample bullish momentum.

If they ever stop, one would expect the S&P to come down to Main Street’s confidence level. The mere talk of tapering bond purchases is enough to spur-on knee-jerk selling these days.

Just imagine what would happen if the Fed eventually pulls the plug.

They won’t do that entirely, of course. Nor is it realistic to expect an end to the liquidity. Instead, the Fed will allow inflation to steadily creep higher as it eats away at real wealth.

So, while stocks currently look stuck, the truth is that bulls are unlikely to “sober up” any time soon. Watching for upside breakouts is probably the smart move for this reason.

As many traders have seen in the past, the market usually goes up. When it doesn’t, stocks often snap back in tremendous fashion. It’s historically been hard to be bear. And with the Fed on their side, bulls couldn’t be happier.

That means the next minor rally could easily lead to another major leg up, separating Wall Street and Main Street even further.