Did you get scared away from precious metals by last week’s “gold plunge?”

If you did, it might be time to reconsider that decision. Gold’s steadily rising this morning and so is silver.

And according to noted goldbug Peter Schiff, sudden dips are commonplace during protracted precious metals rallies.

“What the market is doing is trying to flush out the weaker players. When it comes to a bear market, it’s trying to create some hope and sucker people back into the market by having a really big rally. Well, in a bull market it’s the opposite,” Schiff said in his podcast.

“The market is trying to instill fear in the weaker hands, so you get these spectacular one-day moves in the opposite direction of the primary trend to shake people out, to get the weaker players out of the market so you can clear away the excess baggage and then continue the trend.”

And with no coronavirus relief deal in sight, bulls have little to look forward to. Let’s hope that lawmakers can come to an agreement when they next meet.

If they don’t, though, investors need to be ready for more of the same:

Uncertainty, a weaker dollar, and ultimately, higher gold prices. Because regardless of whether the market drops, gold could rally further.

Heck, even the legendary Warren Buffett – who is famously “anti-gold” – just bought a stake in Barrick Gold (NYSE: GOLD), one of the market’s top gold miners.

Buffett has historically preferred equities to gold simply because stocks have outperformed gold long-term. He did once say, however, that “gold is a way of going long on fear,” and that it’s a good way to profit off fear “from time to time.”

In buying shares of Barrick, Buffett acknowledged that he believes fear will rise – something that could certainly happen given the circumstances.

China and the U.S. are once again at each others’ throats. The new stimulus relief bill won’t be here any time soon. The U.S. labor market recovery is slowing.

And, most importantly, central banks have their money machines “cranked up to full blast.”

Only one of the conditions listed above would be enough to scare investors. Combined, though, they create a “fear cocktail” that’s not only pumping gold, but Bitcoin (often called “digital gold”) as well.

From a purely technical standpoint, gold looks like it’s on the precipice of another surge, too: 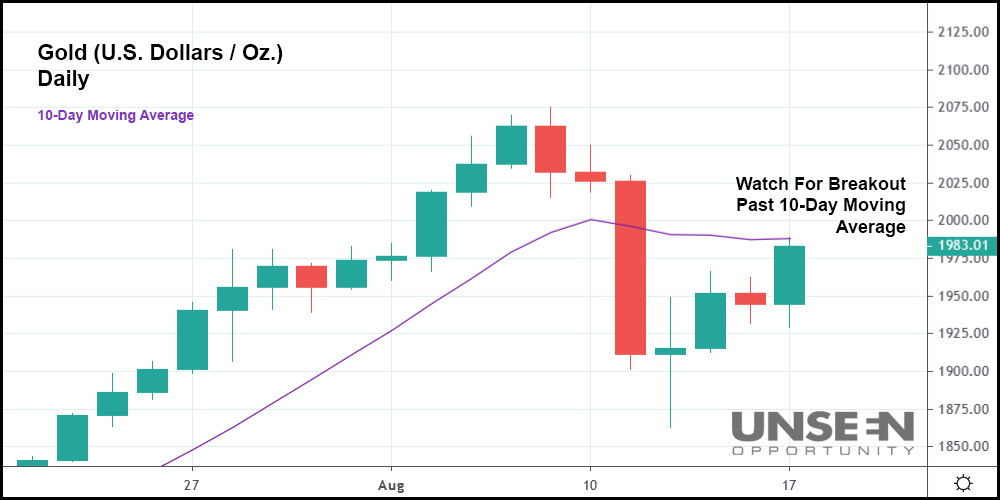 Yes, there were sell-offs (albeit not as drastic as last week’s) but whenever gold dipped beneath the 10-day moving average, it only did so temporarily.

And while that’s typical of any traded asset in an uptrend, gold’s “snapback performance” in 2020 has been tremendous.

Don’t be surprised if gold manages to mount another rapid comeback.

Gold-fanatic Peter Schiff believes it’s going to happen, and Warren Buffett – a gold bear if there ever was one – does too.

Even with gold and other precious metals trading so close to their all-time highs.