Too scared to buy. Too greedy to sell.

Meanwhile, coronavirus cases are surging across the country. Even America’s pastime, Major League Baseball, is watching its players test positive for the disease.

As a result, the market doesn’t want to budge. Stocks opened trading higher this morning before sinking shortly after noon struck.

By the close, the major indexes were mostly flat on the day.

Much of the market’s recent movement – or lack thereof – has to do with expectations. Bulls thought a rapid economic recovery was underway.

A second wave of Covid-19 would likely derail that model. Share prices would look vastly overvalued, too, should another outbreak occur.

“COVID cases have been spiking higher in certain US states […] the issue is becoming too much for the market to ignore,” said Vital Knowledge founder Adam Crisafulli.

“The problem has more to do with market expectations (way too complacent/calm) and psychology (with the consensus embracing the “V”-shaped narrative).”

As coronavirus infections reappear, that “V” could become a “swoosh,” which would result in a slower recovery. In particular, economists are concerned that the jobs market won’t bounce back as quickly as investors initially thought.

“[The] numbers suggest that the reopening story may not be generating as much momentum for job creation as the surprise May payrolls number had suggested,” said James Knightley, chief international economist for ING.

“While recent activity data, particularly surrounding the consumer sector, has been very encouraging we are a long way from returning to normality,” he added.

“The extended unemployment benefits including the extra $600 per week payment, have clearly supported incomes and spending. However, the $600 payment is due to end in six weeks and if it isn’t extended in an environment where unemployment remains very high, there is a clear risk spending subsides again.”

Uncertainty – an oft-uttered term these days – is rising as stocks chop sideways. And though bulls might not like it, indecision among investors has created a trading opportunity in the silver markets. 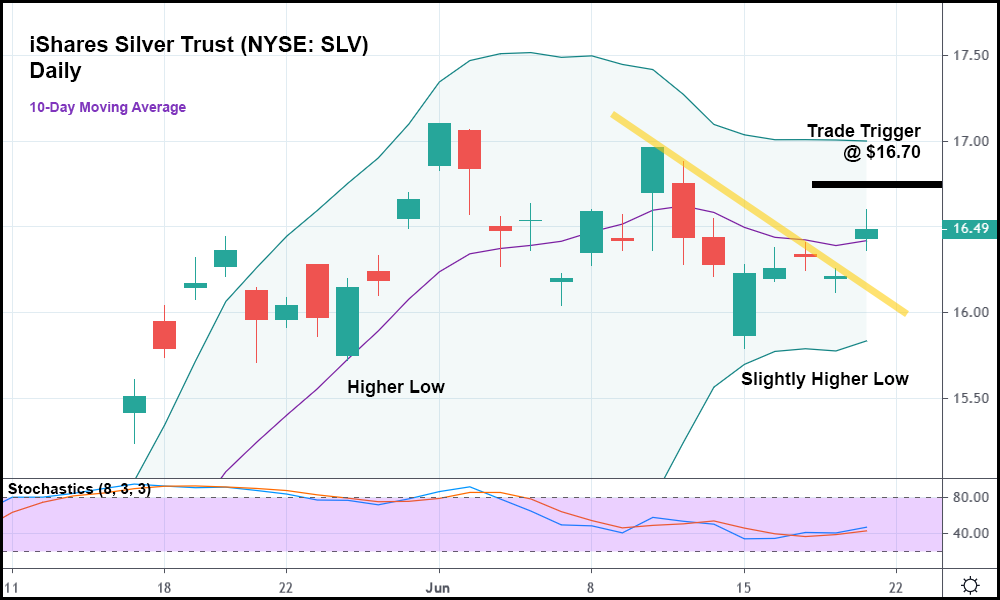 The iShares Silver Trust (NYSE: SLV) peaked in early June as the market began to teeter. Eventually, stocks soared on a massive May jobs report, pushing SLV back down.

Now, however, after setting a higher low on June 15th (relative to the low of late May), the silver ETF is eyeing another leap higher.

SLV managed to trade above the 10-day moving average and its minor bearish trend (represented with the yellow trendline).

Should SLV close above today’s high, it might make sense to take the ETF long with a trade trigger of $16.70.

Simply put, the market does not look like it’s ready to soar again any time soon. So long as it doesn’t blast upwards, precious metals stand to benefit.