Stocks down, rates up. As has been the case in each recent pullback, rising rates sent equities lower this morning.

Yields even hit new monthly highs as the market priced in a 19% chance of a Fed rate-hike by March of next year. But instead of a tech wreck, value shares led stocks lower today. The opposite usually occurs in response to rising yields as most tech stocks are growth-focused (i.e., debt-dependent), which makes them more rate-sensitive. This morning’s slump saw those roles reversed.

However, both companies also saw their stock valuations crater shortly after reporting. The reason being that their margins slimmed significantly in Q3 due to operating costs rising faster than consumer prices.

“The consumer is spending and engaging in this economy at a level that is beating expectations,” noted GLOBALT portfolio manager Keith Buchanan.

“What’s hammered the market though is that for Target and Walmart, the two biggest retailers in the country from a brick-and-mortar standpoint, the costs of running those businesses are outpacing the strong consumer, so they’re missing on margins.”

We mentioned that after Q2 earnings were released earlier this year, margins would eventually narrow for certain types of major corporations. This was alluded to by the gap that initially formed between the Producer Price Index (PPI) and Consumer Price Index (CPI) back in Q1. We estimated that companies would either have to eventually raise prices for consumers or simply “eat” the increased costs, thus reducing their margins.

It seems now that the latter has begun and the CPI/PPI gap has only widened over the last quarter as well.

This is the kind of thing that should be spiking the market lower, but over the last few days, stocks are only down modestly.

Divergence between sentiment and assumed future performance has materialized in the broader market, too. Bank of America’s most recent Fund Managers Survey found that global growth expectations are still extremely low compared to the number of fund managers overweight equities. 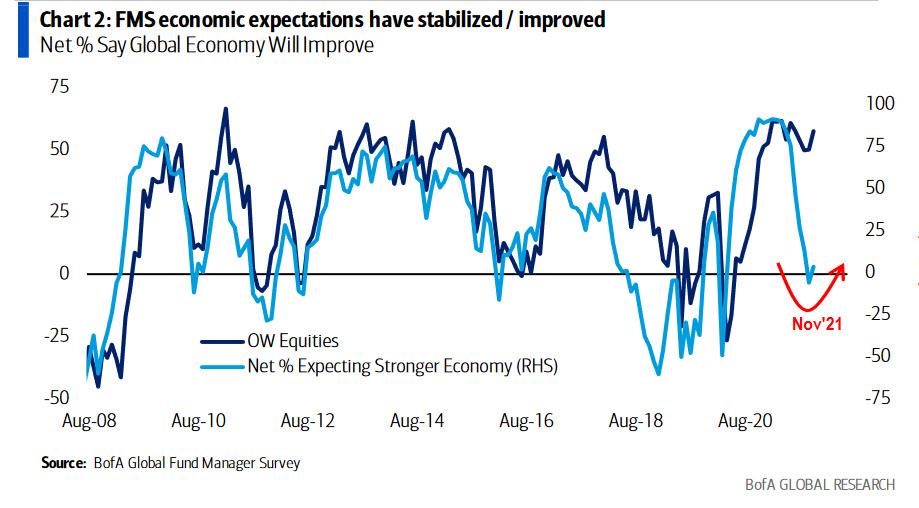 And much like the CPI/PPI gap, this one too must close at some point, either through a massive surge in the percentage of fund managers expecting a stronger global economy…

Does this mean it’s time for traders to exit the market completely? No, not yet. But it is absolute confirmation of the imbalances that form when stocks are pumped-up on unprecedented quantitative easing (QE) and historically low rates.

As a result, the market remains at a critical crossroads. If the S&P can breach new ground this week, investors may be treated to another major rally. A failure to do so could just as easily precede another rapid slump, followed by a potential bullish continuation as Wall Street seeks to go even more overweight equities opposite stagnant growth expectations.