Stocks are up again this morning as tech stages a comeback. Yesterday, Dow companies did most of the heavy lifting.

Now, the Nasdaq Composite is lifting the broader market.

But that hasn’t stopped analysts from predicting an imminent correction. On Sunday, cycles expert Charles Nenner said that the market would get “cut in half.” He accurately predicted a 40% correction back in January 2020.

These days, he says the damage will be even worse.

His reasoning for that has to do with a very long-term look at equities. Going back to the early 1900s, the market’s tops are easily connected, showing its upside limits over time.

“We are up to the trend line again,” Nenner explained.

“It seems very, very unusual to break a trend line that dates back for 100 years.  So, risk is very high […] We are totally out of the market […] We have been out for three or four weeks. We have the same thing as before.  People are more afraid to miss 4% on the upside than 50% on the downside. That’s human nature.”

Morgan Stanley, one of the largest Wall Street banks, is getting on the “bear bandwagon” as well. Bank strategist Michael Wilson warned investors this morning that tapering – the one thing the market fears most – isn’t just projected for the near future.

Wilson says that it all started months ago when the Fed “shadow tightened” monetary policy. He believes a “10-20% correction for the broader indices” is well on its way as a result. And it’s thanks to what Wilson thinks is the market’s most important indicator: 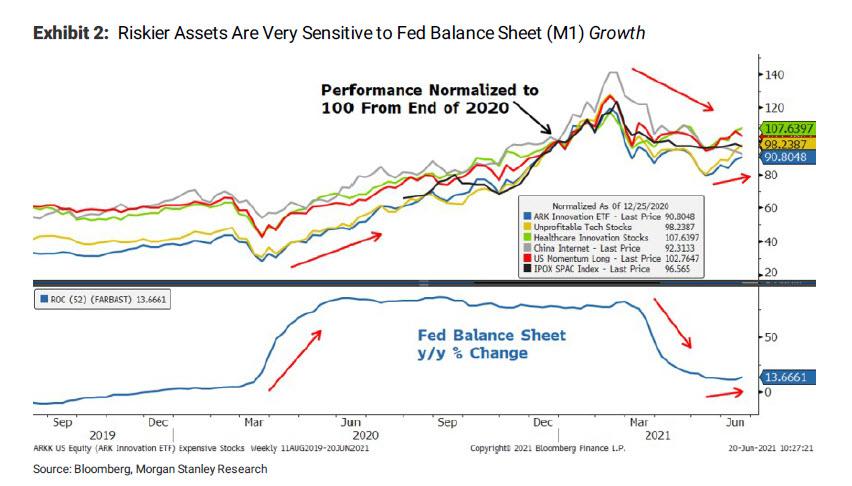 As the Fed’s balance sheet fell, the market’s riskier stocks all stalled. Taking that one step further, an examination of M2 – the supply of money (in the US) that includes cash, checking deposits, and easily convertible funds – shows that the money supply simply isn’t growing like it once was: 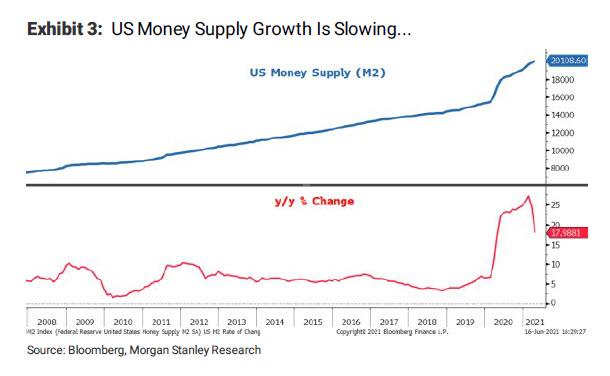 M2’s deceleration coincided with the general market’s slowdown over the last two months. And though much was made about “bullish exhaustion” at the time, it likely had more to do with the onset of the M2 slowdown.

What’s more, liquidity should only tighten further from here regardless of when the Fed decides to hike rates. M2 growth should continue to decelerate.

That puts bulls in a very difficult spot moving forward. If the market’s going to make new highs, it will have to do so without the help of the Fed. M2 won’t be growing like it once was, either.

Oh, and inflation is expected by many skeptics to rise through the end of the year, too.

With so many bearish forces converging on stocks, it begs the question:

Are stocks truly poised to make another leg up?

From the market’s current position, that seems highly unlikely.

Even if equities end up closing out the day for another moderate gain.