Coronavirus vaccine hopes and strong earnings from a top stock have equities rising this morning.

In other words, the market’s bullish motivators have yet to change. Add in another round of Fed stimulus and you’ve completed the trifecta.

Disney (NYSE: DIS), which reported far better-than-expected quarterly earnings last evening, is the one largely responsible for today’s surge. The Dow (+1.20%) is leading both the S&P (+0.70%) and Nasdaq Composite (+0.40%) amid a market-wide lift.

Analysts estimated a Disney earnings per share (EPS) loss of 64 cents. Instead, the company posted an 8 cent EPS profit. Disney says it has over 100 million paid subscribers among its three streaming services – Disney+, Hulu, and ESPN+.

Opposite the positive headlines, though, is a newly released batch of payroll data from ADP. The data analytics firm reported that private payrolls only increased by 167,000 in the U.S. for the month of July. Dow-polled economists expected a 1 million payroll gain, and by comparison, the figure is dwarfed by June’s 4.314 million added jobs.

It’s another chapter in the “saga of disconnects,” which have only gotten worse over time; the granddaddy of them all being the growing divide between Wall Street and Main Street. 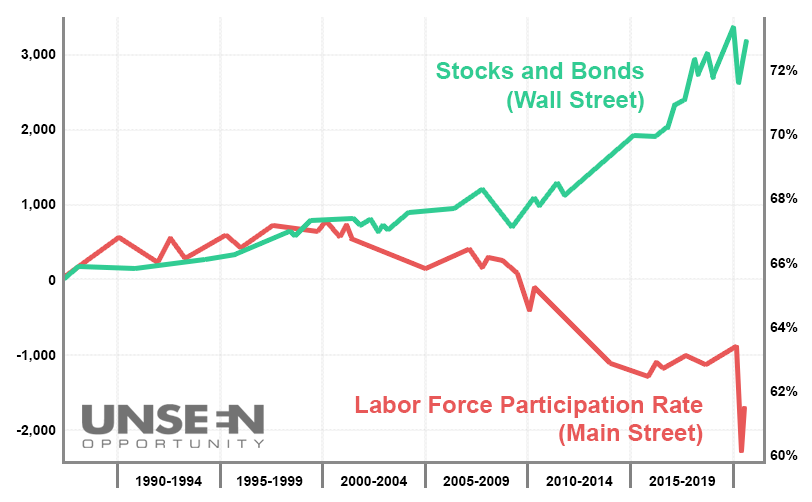 Back in 2000, the labor force participation rate (the measure of an economy’s active workforce, a.k.a. Main Street) began a longer-term decline. Meanwhile, Wall Street (stocks and bonds) continued rising. It wasn’t until 2016 that Main Street stabilized, and in 2019, it actually managed to rise over the course of three years. That’s right around the same time U.S. unemployment hit a historic low.

Then, Covid-19 arrived, and Main Street got crushed. Wall Street, on the other hand, was merely “dinged” by a temporary loss and has almost completely recovered.

The end result is a larger disconnect between the two statistics, even beating the disparity that followed the 2008 Financial Crisis.

Is that good news for bulls? Absolutely not, but it also doesn’t mean the market will collapse any time soon. The Fed has proven time and time again that so long as it can provide stimulus, stocks will rise.

Just recently Fed Chairman Jerome Powell said that he wants to target a higher inflation rate. High unemployment and low energy prices have made deflation an immediate risk, meaning that the “dollar machines” could relentlessly churn out cash for the foreseeable future, resulting in a rising (Fed-supported) market.

However, the market may also reach a point where it consistently rises but fails to exceed inflation.

It’s a bit of a “nightmare scenario,” but unless the U.S. economy makes a quick recovery, it may very well happen within the next year or two.

The Fed’s been tasked with an unenviable – if not impossible – job; to save the economy and protect the dollar. In its quest to do so, stocks could absolutely punch higher, meaning that traders need to be ready if they take off once more.

Even if, in the grand scheme of things, another leg up doesn’t make much sense from a fundamental standpoint.