Stocks traded higher again today as bank earnings continued to impress. This time, it was Goldman Sachs that reported a blowout quarter thanks to the company’s massive trading gains. All three major indexes opened higher on the day in response.

“The banks painted a strong and healthy picture of the US consumer,” explained Oanda senior market analyst Edward Moya.

It’s much easier to take on debt when rates are near historic lows. The 10-year Treasury yield climbed higher today to 1.57% (+3.62%), limiting growth-hungry tech gains in the process. But the 10-year rate is still down significantly when compared to its longer-term performance.

The latest University of Michigan Consumer Sentiment Survey wounded bulls slightly this morning, too, when it revealed a significant “stagflationary” impulse. Inflation expectations surged to their highest level since 2008 while the current economic conditions index approached its initial Covid low. 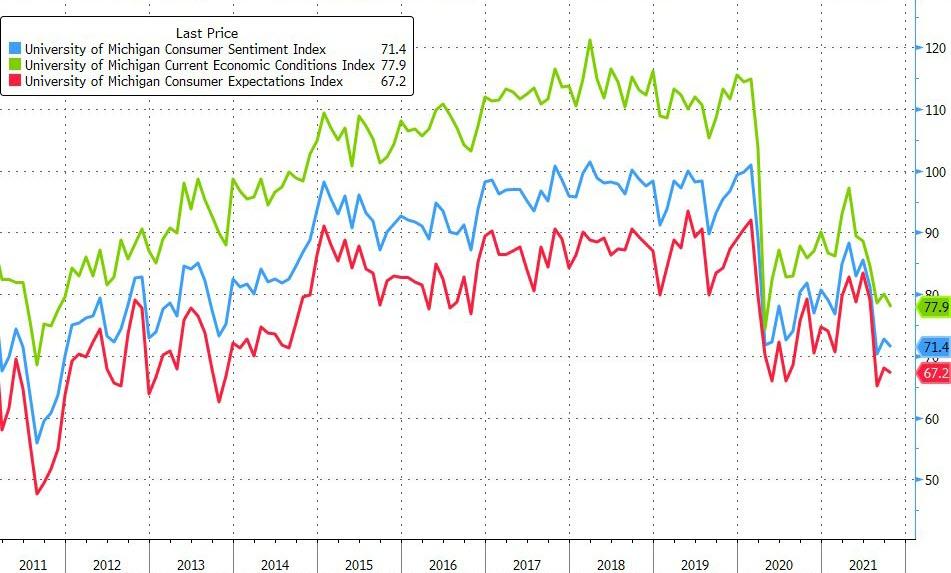 Clocking in at 77.9, that’s the second-lowest current economic conditions index reading since 2011.

“When asked to describe in their own words why conditions were unfavorable, net price increases were cited more frequently than any time since inflation peaked at over 10% in 1978-80,” said Richard Curtin, the long-time director of the survey.

“The inflation environment and concerns about supply chains have not put a strong dent in retail sales,” noted BMO Wealth Management’s Yung-Yu Ma.

“Consumers are acclimating to higher prices. So far that hasn’t resulted in a meaningful fall off in demand. But this willingness to absorb higher prices is not unlimited.”

In other words, the slump in consumer sentiment has yet to impact retail sales. But that’s not to say it won’t do so at some point in the near future as the holiday season draws near. October’s retail sales data will be critical in determining the economy’s trajectory heading into Thanksgiving and Christmas.

Most analysts think that a strong earnings season will prevent another sell-off from happening this year. Natixis Investment Managers portfolio manager Jack Janasiewicz believes that’s not only due to a strong crop of earnings, but the fact that quarterly estimates have been trimmed significantly in anticipation of a slow Q3.

“We’ve had a number of Wall Street strategists come out and call for a correction. If you look at things like the surprise indices, they’re all trending lower […] earnings estimates for the third and fourth quarter have leveled off,” Janasiewicz said.

“To me, it feels like the market’s leaning bearish. And when we start to think about the buyer power that could come back in when everybody starts to flip positive — earnings might be that catalyst, [and] we could certainly see that upside.”

So, will stocks march on to new highs in the coming weeks? It certainly seems like they could, aided by analysts who scaled back their quarterly estimates to produce bigger earnings “beats.”

Even if the reality of the earnings picture is far less bullish than these “surprise reports” would have investors believe.