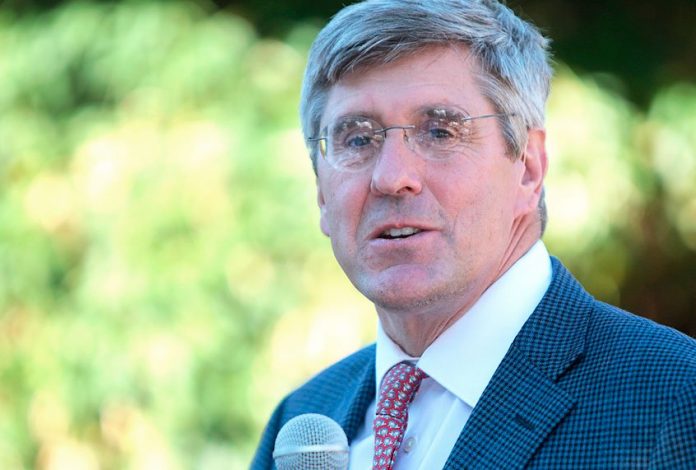 We’re more than half a year removed from Fed Chairman Jerome Powell’s interest rate hike announcement back in September, and even though he’s changed his tune since then, President Donald Trump is still upset about his decision to unload the Fed’s balance sheet.

The move had a dire effect on the market, plunging equities into the abyss in the weeks leading up to Christmas, and now some economists argue that it may have artificially slowed economic growth. Had interest rates remained unchanged, GDP growth might have stayed on track for a record setting 2018.

Additionally, some analysts now say that fears over a slowdown could have been avoided for the current year had the Fed left rates alone.

Stephen Moore, Trump’s next pick for a seat at the Fed’s table, thinks that the FOMC should go even more dovish by cutting rates another half percentage point – something that he says would prevent the stock market from collapsing.

In a New York Times interview, Moore said that 2018’s rate hikes actually made him “furious”, resulting in a call for Powell’s resignation. Moore now regrets the outburst, but still believes that he’s of the correct opinion on monetary policy, as evidenced by the continued release of poor economic data.

In addition to dishing it out, Moore’s been getting his fair share of criticism as well from naysayers who claim that he lacks the proper qualifications for a Fed seat. On Friday, Trump said that Moore is the “next man up” but has yet to submit his official nomination.

Trump continued with his scolding of current the Fed Chair, stating that he has “no feel” for the economy.

And though it’s still fashionable for Americans to reject everything the President says – even after being exonerated in Mueller’s report – it seems that Wall Street agrees (almost unanimously) with the Oval Office.

Ellen Zentner, chief U.S. economist as Morgan Stanley, said in an interview with Bloomberg that many Wall Street firms share the same opinion as Moore – that the previous rate hikes were a mistake, and a further decrease could end up healing some serious market wounds.

For the Fed, it’s a tough spot to be in. Powell knows that in order to prepare the United States for a recession, he eventually has to raise rates via the unrolling of assets from the Fed’s balance sheet. He needs cash to work with should another crisis come down the road, and as it stands, the Fed would largely be handcuffed in the event of a major downturn.

Raising rates, on the other hand, would deliver a deathblow to equities, potentially kicking off a vicious crash.

So, Powell and the FOMC have decided to keep things unchanged. The responsible thing to do long-term would be to raise rates, but in today’s market environment, that’s simply not feasible.

Moore’s approach – lowering rates further – would be irresponsible long-term, but short-term could save equities from a bear market.

It’s a classic damned-if-you-do, damned-if-you-don’t scenario, and even though Moore might be right about Powell’s rate hikes in 2018, the fact is that there’s no ideal choice for how to proceed from here.

It’s a strange game, monetary policy, and it seems that Powell has realized that the only winning move is not to play – leaving interest rates as is.

He’ll end up getting crucified for it anyway, though, after overstepping in September and December of last year, and possibly for good reason.

Either way, the Fed is in a highly unenviable position, and if Moore really wants to join the fray, I just hope that he considers the long-term effects of quantitative easing – the economic policy that got us into this mess in the first place.