Stocks opened for a small gain this morning as bulls pushed the market to new heights. It’s been a slow crawl to the top of the charts, and thus far, every rapid dip has been quickly filled by reflexive buyers.

The Fed’s tilting hawkish, but really, monetary policy remains “uber-dovish” in the grand scheme of things. That’s been more than enough reason to keep bulls in the game despite landmark inflation reports and an ever-growing housing bubble.

And over the last week, Covid infections have risen again, too, as the “Delta variant” spread across the globe. Lockdowns were just reactivated in Perth and Brisbane, following suit with two other major Australian cities (Sydney and Darwin) in an attempt to curb new cases.

Perhaps the most discouraging aspect of this trend is that most people dying while infected with Delta are already fully vaccinated. This was recently found to be true by British doctors and confirmed in other parts of the world. Moreover, fully vaccinated people are primarily the ones getting infected in the first place.

In response, the World Health Organization (WHO) has resorted to its old tricks, recommending masks and social distancing as Covid infections surge. 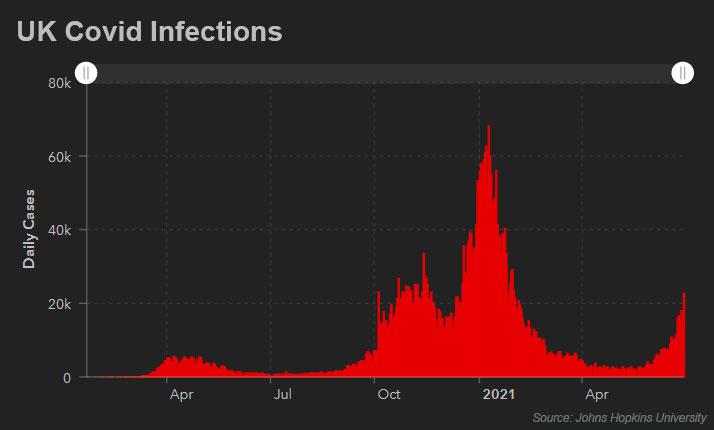 Yesterday, over 22,000 new cases were confirmed in the UK in a single day. That’s the most since January and indicative of an exponential burst in cases. 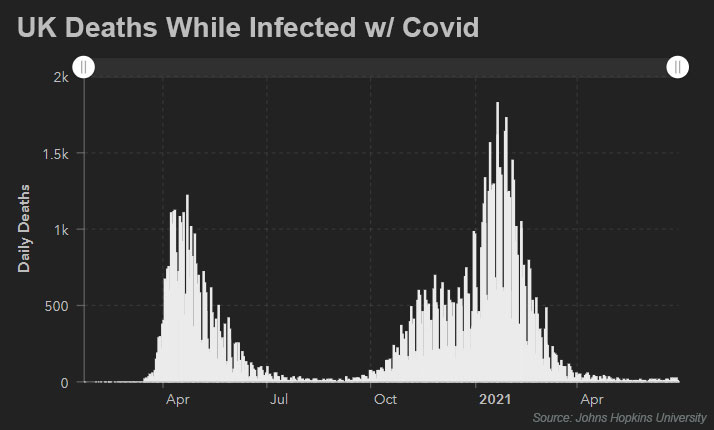 Deaths while infected, however, are down significantly “cross the pond,” which may persuade other governments to hold off on new lockdown measures. Sadly, there’s usually a several-week-long lag time between infections and deaths. That means the jury’s still out on whether a highly vaccinated UK will be able to avoid another medical “logjam” at its hospitals. We’ll find out soon enough. If not, this could have major implications for the rest of the world.

In Australia, which has only averaged roughly 30 new Covid infections per day over the last week, daily deaths are down significantly also.

But the government still retreated to its mid-pandemic restrictions in just a matter of days. The Delta variant has also caught the eye of Wall Street, prompting banks to warn clients about potential investment hazards.

“The rise of the Delta variant is a risk to the [global economic] outlook, largely for [emerging market] economies with low shares of their population fully vaccinated,” wrote JP Morgan analyst Michael Hanson in a note yesterday.

But the places where Delta’s running rampant – primarily the UK and Russia – are also some of the most vaccinated countries in the world. Second and third-world nations aren’t seeing nearly as much of an uptick in cases by comparison. Infections in India, for example, have leveled off significantly after the country endured a vicious fight with the Delta variant in April and May.

Moderna (NASDAQ: MRNA) came out and stated, though, that its vaccine was effective at fighting Delta after lab tests showed a “modest reduction” in Delta variant activity.

“These new data are encouraging and reinforce our belief that the Moderna Covid-19 Vaccine should remain protective against newly detected variants,” the company’s CEO Stéphane Bancel said this morning.

These findings have yet to appear in the real world, where fully vaccinated people are still being infected with the Delta variant independent of vaccine manufacturer. MRNA shares shot higher following Bancel’s comments nonetheless.

Moving into July, be on the lookout for another “Covid scare” and, in particular, how governments react to it. Another full-scale set of restrictions in the US would undoubtedly crash the market, just like they did last year in March. And until the government response becomes clearer stateside, vaccine manufacturers (like Moderna, Pfizer, and others) might see a bump in their valuations.

Regardless of whether a small increase in Covid cases truly deserves drastic government intervention – something that would ultimately plunge the West into another deep recession.