Apple said sales jumped 54% last quarter and that it would increase its dividend by 7%. In addition, the tech giant plans to authorize $90 billion in share buybacks. Facebook, meanwhile, enjoyed a 48% increase in revenue thanks to higher-priced ads.

Today, each company saw their shares erupt higher at the open. And the rest of the market initially joined in on the fun, too, before it pared-back its gains (alongside Apple) around noon. Only Facebook was able to retain the majority of its earnings-driven spike in price.

But most surprising of all was that the tech-heavy Nasdaq Composite actually traded lower on the day. Investors assumed that strong AAPL and FB first-quarter numbers would prod other tech stocks forward.

Instead, they sunk, and it all has to do with another major market force: 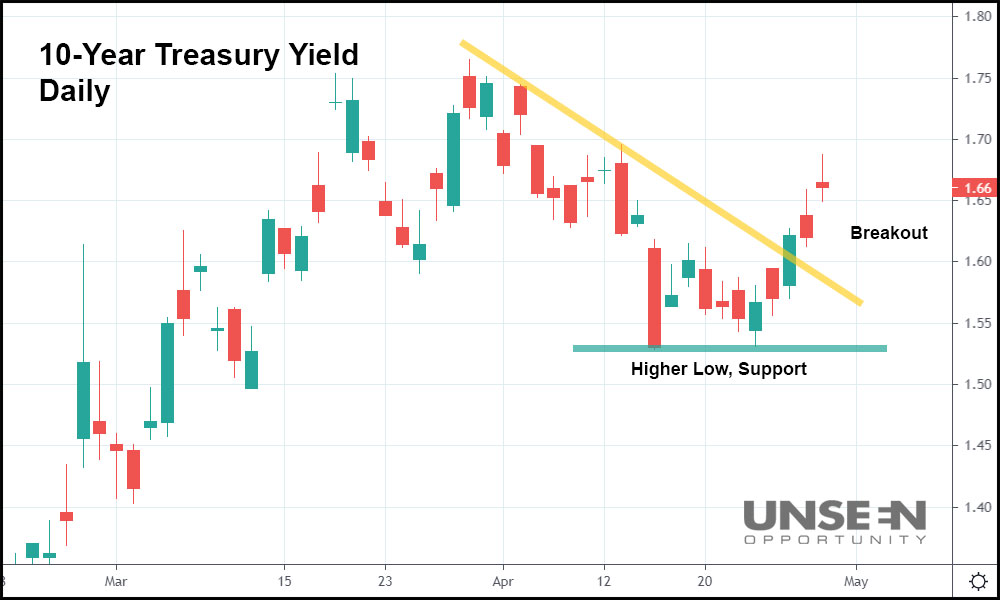 That’s right, folks. Treasury yields are rising again, and today, the 10-year Treasury yield may have just confirmed a breakout higher. Rates had been trending up for most of the year until late March, when they began to finally cool off.

What comes next could be a race to the recent high of 1.77%. And if rates continue on their longer-term trajectory, the 10-year yield should exceed that high with ease.

This new short-term trend bodes poorly for growth stocks, which have grown fat on plunging rates during the pandemic. Tech stocks, in particular, enjoyed the low-rate environment.

As a result, even the most bullish of analysts are starting to get concerned.

“But we expect a choppier environment as tensions are set to persist between better economic growth and earnings prospects versus the potential for higher taxes and rising interest rates as the economy normalizes.”

Investors have grown increasingly worried that the Fed will start tapering as well. This has only compounded market nervousness despite a better-than-expected earnings season.

“As vaccination rates accelerate, employment strengthens, and expansive fiscal policy adds further support to household and business incomes, investors are now looking for signs of whether the central bank safety net could be withdrawn sooner than expected.”

A wall of stock buybacks are waiting in the wings also. Corporations authorized a record-setting number of stock repurchases this year, fueled by trillions in newly issued corporate debt.

Many of those buybacks have yet to be made, though, indicating that many companies expect a correction in stocks.

And with yields pushing higher, it could happen sooner rather than later. So, as hard as it may be to say goodbye to tech stocks after such strong AAPL and FB earnings, it might be the wisest short-term choice. Rising rates won’t accommodate another tech rally. And corporations want stocks to fall, too.

Tech’s overachieved in recent weeks, anyway, making it particularly susceptible to a pullback. That means it – along with the rest of the market – could get hammered in May.

Regardless of whether quarterly revenues continue to impress.